Modern Indian sculpture artists blend traditional styles with western creative ideals. Thanks to their mastery, there is a growing awareness and interest in the West about their captivating creations. DESIblitz brings you the best Indian sculptors.

Beautiful ancient sculptures adorn palaces, temples and caves in India. But distinct from them are modern Indian sculptors who have conjured outstanding avant-garde creations based on western principles.

The title, ‘Father of modern Indian sculpture’ must go to Ramkinkar Baij (1906-1980), a prolific artist who utilised a wide variety of materials to create many types of forms, and experimented with minimalism and geometric abstraction.

Baij was a versatile early modernist who was a painter, sculptor and graphic artist. He blended classical Indian style with western methods to provide a novel touch to his art which has inspired succeeding generations of sculptors.

Ramkinkar Baij is also noted for integrating elements of tribal art into his works. His sculptures have been exhibited in renowned museums and art centres in India and overseas. 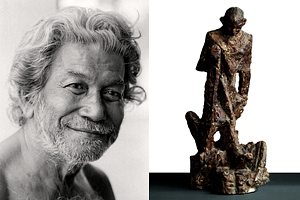 Baij’s lasting legacy consists of breaking away from the formal styles of the British India era to a unique personal art technique which exuded vitality, joy, dynamism and vigour. Not surprisingly, his path-breaking work has received international critical acclaim.

After Baij, numerous other Indian sculptors arrived on the scene and became renowned worldwide for their outstanding creations.

Many even migrated to western nations to develop their skills and reach a larger audience. A prime example is Anish Kapoor who shifted base to London for further studies and now practises his craft there. 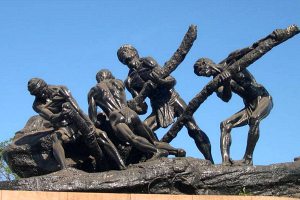 Talented Indian sculptors have excelled in creating captivating sculptures from a versatile range of materials including bronze, metal, wood and sand.

Presently, Installations have become a popular trend in Indian sculpture lead by masters such as Subodh Gupta, Nalini Mallani and Subodh Kerkar.

An Installation is a temporary creation in a gallery or museum constructed with natural materials such as steel, cans and the like.

Dhanraj Bhagat blended inventive traditions with western ideals to create his own unique style. His best works were carved out of wood, though he did experiment with new materials frequently.

An important name is Deviprasad Chowdhury whose epic work ‘Triumph of Labour’ depicts the common man’s struggle during the British Raj in India. 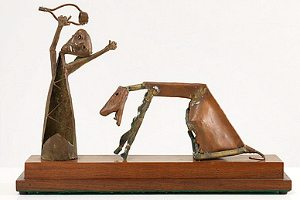 Sadanand Bakre was a celebrated sculptor who won numerous awards.

He was one of the founders of the Progressive Artists group which was created after India gained independence. His innovative masterpieces have been displayed in many locations in Europe and America.

Another notable sculptor is Somenath Hore who was influenced by communist and socialist ideals. He is credited with making sculptures accessible and understandable to the common man.

Hore’s ‘Mother with Child’ is a touching sculpture which conveys the deep anguish created by the Vietnam War.

Dhruva Mistry merges traditional sculptural techniques with standard market fare. He is the artist responsible for ‘The Floozie in the Jacuzzi’ sculpture in Victoria Square in Birmingham City Centre. He is also an expert at other arts like etching, painting and drawing.

Britain-based Anish Kapoor is famous for winning the distinguished Turner Prize for his excellent works. His mysteriously marvellous creations captivate onlookers. His sculptures mostly have simple forms but their colours range from monochromatic to brilliant hues. Kapoor says:

“We live in a fractured world. I’ve always seen it as my role as an artist to attempt to make wholeness.”

Satish Gujral is a living legend in Indian art whose versatile skills encompass sculpture, painting and architecture. He has won international acclaim and is a recipient of the Padma Vibhushan, the second highest national award in India.

Tapan Talukdar and Krishna Reddy are other famous Indian sculptors. The post-liberalisation period heralded the emergence of new artists who take pride in creating sculptures that are not influenced by any ideology or dogma. 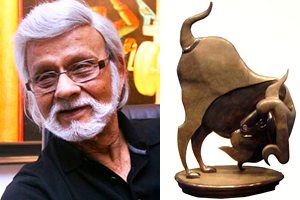 A notable strength of the new generation of Indian sculptors is their willingness to experiment and innovate to create novel methods to convey their ideas. For example, ‘Line of Control’, a sculpture by Subodh Gupta, was created from pans and pots used daily in the kitchen.

Satish Gujral eulogises about this trend: “Never before have I seen so many original artists. Whereas previously there was very little experimentation, now it is the hallmark of the new artists, and perhaps the growth in the economy is also responsible for this new attitude.”

Veering away from the mainstream, one name that stands out is Nek Chand. His rock garden in Chandigarh is world famous for its hundreds of intricate sculptures including many made from recycled materials. Initially, this garden was created in secrecy without official permission. 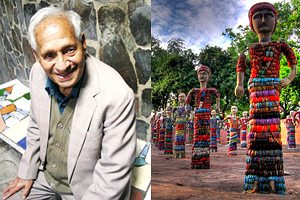 But once it was discovered, popular demand forced city authorities to recognise it. Nek Chand was given a salary and a team of workers to help maintain this park which has become a major tourist attraction for the city.

Nek Chand says: “I make things from what people think is junk or rubbish, and throw away. These figures and sculptures are my childhood fantasies.”

Contemporary Indian art and sculpture exhibit a high degree of maturity and sophistication. Indian sculptors are willing to blend global trends with their traditional native strengths to create unique masterpieces.

The globalisation of the world economy has opened many doors for Indian artists and sculptors.

Arjun loves writing and has a Master’s degree in Journalism and Communication from The Ohio State University in the U.S. His simple motto is “Do your best and enjoy the rest.”
Remembering poet and philosopher Allama Iqbal
Bangladesh the unexplored Holiday Destination