Diljit Dosanjh and Badshah to appear on Koffee with Karan 6

Punjabi singing-acting sensation Diljit Dosanjh and Rapper Badshah are set to make their debuts on Koffee with Karan Season 6.

“Koffee with the RAPSTAR and the ROCKSTAR!"

The shooting of Koffee with Karan season 6 is well under-way. Punjabi singer-actor Diljit Dosanjh and rapper Badshah are the latest names to grace the famous couch.

The two recently shot for the episode, with Karan Johar announcing the news on his Instagram.

The film director and flamboyant host shared a picture alongside the duo, captioning it:

Diljit also shared his excitement of debuting on the chat show. Posting a series of pictures, along with a caption, he writes:

In sporting bright ensembles, both Dosanjh and Badshah can be seen posing together and with the presenter himself.

Besides this, Badshah has released a reprised version of his earlier song with Diljit called ‘Proper Patola’ for the film Namaste England (2018).

The two will have plenty to discuss with the host, including music, movies and working with the biggest names in Bollywood.

Diljit has had a busy 2018 with several movies releasing. This includes sports biographical film Soorma and (2018) and period drama Sajjan Singh Rangroot (2018).

The multi-talented star also released his new album ‘CON.FI.DEN.TIAL’ in 2018 under the T-Series label. 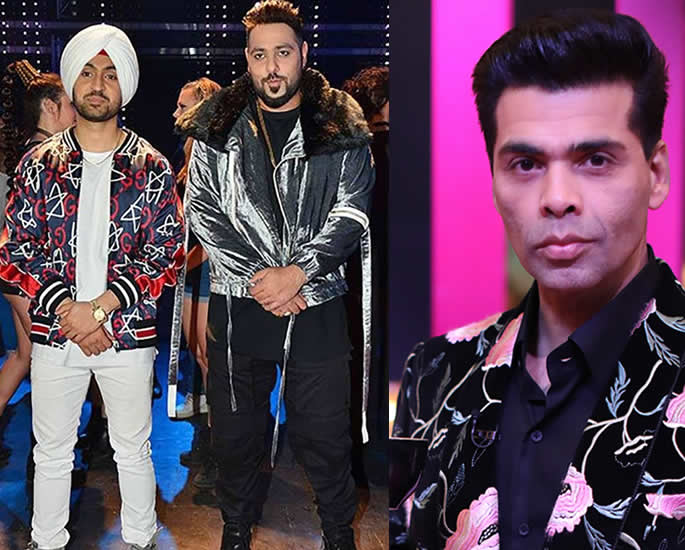 Meanwhile, Badshah has also had a hectic 2018 with the release of his debut album ONE (Original Never Ends).

The rapper-extraordinaire has already had a string of hits this in 2018.

Actresses Deepika Padukone and Alia Bhatt starred in the first episode of the show, sipping a coffee with host Karan Johar.

And a whole host of exciting stars have also shot for episodes for Koffee with Karan 6.

Gracing the glittery couch so far have been the powerhouses of talent Akshay Kumar and Ranveer Singh and father and daughter Saif Ali Khan and Sara Ali Khan.

Brother-sister Arjun Kapoor and Janhvi Kapoor, superstar Aamir Khan and soon to be co-stars Varun Dhawan and Katrina Kaif have also recorded for the programme.

Now that there is confirmation of Dosanjh and Badshah appearing, the season is getting bigger and bigger.

It will be interesting to see who else in Bollywood will be joining the charismatic chat show host and divulging their inner-most secrets.

Other names to be rumoured to appear on the show are Priyanka Chopra with US Singer, fiancée Nick Jonas, as well as married couples Anushka Sharma and Virat Kohli and Sonam Kapoor with Anand Ahuja.

There is no confirmed date for the episode starring Diljit Dosanjh and Baadshah.

However, it will be great to watch two musical artists on the same platform, answering many quirky questions.

Koffee with Karan airs every Sunday at 9 pm on Star World in India. Globally the programme is broadcast on channels operating under the Star Network.

Hamaiz is an English Language and Journalism graduate. He likes to travel, watch films and read books. His life motto is “What you seek is seeking you”.
Saif Ali Khan reveals son Ibrahim aspires to be Bollywood Star
Rakhi Sawant vs Tanushree Dutta #MeToo Battle is Hotting Up