Rakhi Sawant vs Tanushree Dutta #MeToo Battle is Hotting Up

Rakhi Sawant continues to accuse Tanushree Dutta of lying about her allegations against Nana Patekar. The battle between the two actresses is heating up.

“She has filed defamation case against me for 10 crores, I will file one for 50 crore."

The ongoing #MeToo movement is causing an almighty storm in Bollywood, especially as a battle between actors Rakhi Sawant and Tanushree Dutta intensifies.

Rakhi continually accuses Tanushree of lying about the allegations made against Nana Patekar. Meanwhile, Tanushree is suing the former Big Boss contestant.

Former actress and model Tanushree Dutta set the ball in motion. She came forward to accuse legendary actor Nana Patekar of sexual harassment on the sets of Horn OK Pleassss (2009).

On the sets of the movie, Tanushree alleges that Nana had harassed her and made her feel uncomfortable.

Although she filed a complaint at the time, nothing came of it. In September 2018, the allegations had resurfaced as Dutta’s claims were finally heard.

Since then, many well-known names have been accused of sexual harassment and misconduct – In some cases by multiple women.

Tanushree has received plenty of support and encouragement from the film fraternity.

However, the ever-opinionated Rakhi Sawant has come forward to accuse Dutta of lying about her allegations, causing a war between the two.

Coincidentally, Rakhi was roped in to replace Tanushree for the item song in Horn OK Pleassss (2009).

During a press conference held in Mumbai, Sawant claims that Dutta is lying and accused her of taking drugs. She stated:

“Nowhere have they (Bollywood) said that Nana Patekar was wrong. Now they cannot say that because he did nothing wrong. And if he wanted to do something like this he would have done the same with me, or for that matter so many other actresses he has worked with. 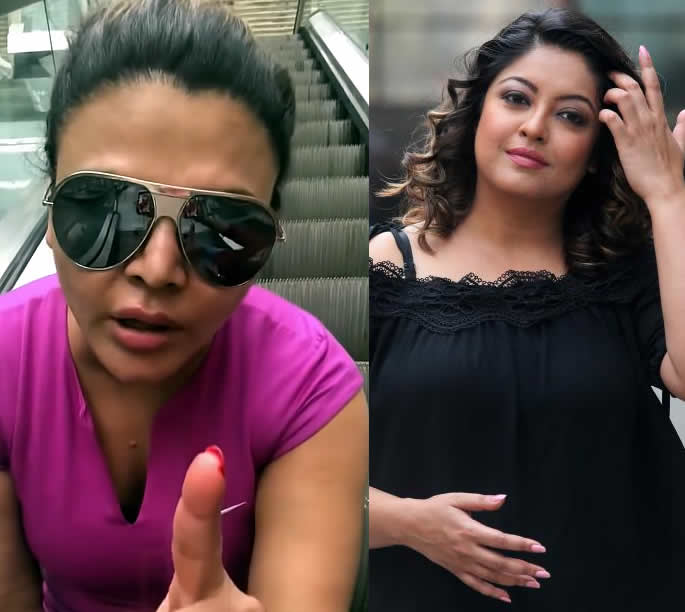 The actress went on to say:

“Why would he single out Tanushree? In my opinion, Tanushree did not want to do the particular track, she wanted to take drugs and get high.”

After hearing her claims, Tanushree has filed a defamation complaint worth 10-crores against Rakhi.

Her lawyer Nitin Satpute told India Today that they had filed a criminal and civil defamation complaint against Sawant for maligning Dutta’s character and image.

In response to this, Rakhi put up a series of reaction videos on her Instagram account. Sawant said:

“She has filed defamation case against me for 10 crores, I will file one for 50 crore. I will file a 50 crore defamation against Tanushree for calling me a lower class girl.”

Rakhi ended her series of videos by arguing that the #MeToo movement is being exploited in the wrong way. She said:

“It is not going in the right direction. Various girls are coming and taking advantage of the movement and without facing harassment, are accusing innocent men.

“I feel bad for those women who have actually suffered sexual harassment and they won’t be heard because of girls who are lying.”

Rakhi is even in support of a ‘#HeToo’ or ‘#MenToo’ movement saying too many of the men are not being heard in all of this and media is taking sides with just the women after publicity.

It seems that there is a new storm in Bollywood as Sawant and Tanushree engage in a war of words.

Rakhi Sawant, who is known for her controversial opinions, might have just met her match in an equally opinionated Tanushree Dutta.

We await on what happens next between the feisty pair. Surely there is more to come.

Hamaiz is an English Language and Journalism graduate. He likes to travel, watch films and read books. His life motto is “What you seek is seeking you”.
Diljit Dosanjh and Badshah to appear on Koffee with Karan 6
20 Classic Romantic Bollywood Films you Have to Watch