Deepika Padukone and Alia Bhatt are first guests on season 6 of Koffee with Karan. Karan Johar will be asking sassy questions to both of them.

"The episode will see the actresses discuss girl power"

Bollywood actresses Deepika Padukone and Alia Bhatt have been confirmed as the first on-air guests to grace season 6 of popular television talk show Koffee with Karan.

Over a cuppa, Deepika and Alia will appear in episode 1 sitting on a couch answering saucy questions led by famous film producer and vibrant host, Karan Johar.

With Karan brewing the coffee, the trio will also discuss hot topics surrounding Bollywood and their personal equations.

Earlier, it was speculated that chocolate boy Ranbir Kapoor would be joining Alia on the show. But putting all rumours to bed, the producers of the show, along with Karan announced Deepika and Alia as the first pair of guests.

Whilst empowering the two women, Karan tweeted the big news:

The first cup of koffee is all about #girlpower !! Welcome @deepikapadukone and @aliaa08 on episode 1 season 6 of #koffeewithkaran on @StarWorldIndia @hotstartweets pic.twitter.com/lk4vf997p9

The makers of the show have released a small teaser where Karan is heard saying:

“l will admit to asking all the wrong questions if you admit to loving the answers.”

Deepika has made several appearances on the show before, be it with Sonam Kapoor or Priyanka Chopra.

Similarly, Karan’s student Alia has also frequently appeared on the chat show. During season 5, she accompanied best friend Katrina Kaif on the show.

Having Ranbir’s ex and present love interest sitting on one couch will indeed be an interesting view. Smilingly, reacting to the announcement, a fan on twitter said:

It seems everything links back to Ranbir. The chocolate hero is dating Alia.

And while Ranbir shares a historical connection with Deepika and Katrina, Alia maintains a good understanding with both of his former girlfriends.

A contact linked to the programme told Mumbai Mirror:

“The episode will see the actresses discuss girl power, the changing role of women in films today and their real-life friendship, among other things.”

In between, it is likely that Karan will ask them questions about their personal life.

While Deepika may reveal about her potential marriage, Alia could share some news about her relationship with Ranbir. 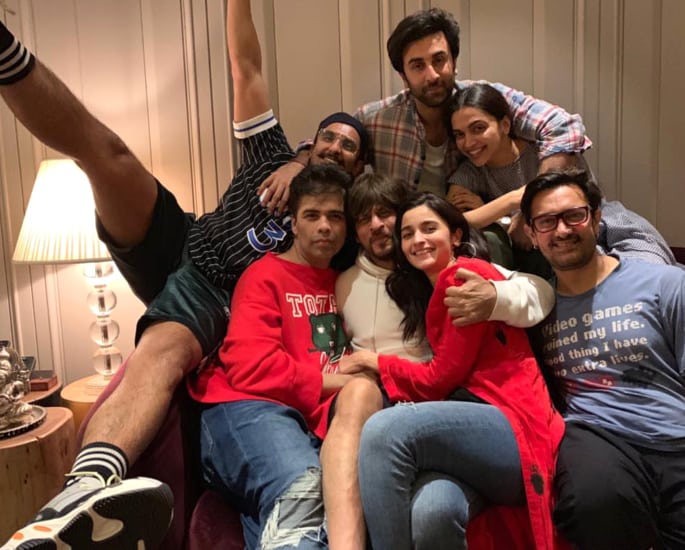 The two actresses last met each other at Ranbir Kapoor’s pre-birthday bash.

Now all these actors all in one would make for a ‘Dhamakedaar’ film in the future.

Meanwhile, apart from Deepika and Alia, Janhvi Kapoor makes her debut on the show with brother Arjun Kapoor.

A source close to Karan mentioned to the Mirror:

“It’s going to be a special episode as it marks their first joint appearance, in which they open up about their relationship.”

The Jodi of Sara Ali Khan with daddy Saif Ali Khan will also star on the show.

With the first episode dedicated to girl power, Deepika Padukone and Alia Bhatt will enjoy the first sip of Koffee with Karan Johar.

The show goes on air from 21 October 2018 and will be broadcast under the Star Network.

This is one episode that Koffee with Karan fans should not miss. The episode has all the makings of a TRP (Target Rating Point) topper.

It will be interesting to see how things pan out!