A Clash of Cultures in Desi Rascals?

The eighth episode of Desi Rascals sees Jo meet Mo’s mum for the first time. Will Mrs Baig accept her, or will the cultural differences be too great?

“There's a clash of traditions. A clash of cultures.”

Joses are the hot young couple in Desi Rascals. Mo has met the Shahdashians. Now it is Jo’s turn to meet the Baigs. Will Mrs Baig accept her?

Shreena and Praks share a wine-tasting date on a school-night at the Vagabond Wine Bar and ‘enoteca’ in Fulham.

Shmoyel shines on the football pitch as he dribbles past the other lads. Apparently he had trials at Roma when he was 16, but tore his cruciate ligament. (“They all thought I was Italian.”)

And as always, Owais Khan is in the thick of the action! 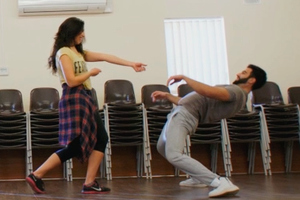 Moses feels it’s time that Jo meets his mother. But not before a dance off! Both of them perform some smooth moves. But will it be just as smooth when Jo meets Mrs Baig?

Regarding Joses, Anj says to Owais: “There’s a clash of traditions. A clash of cultures.” Is he right?

Even Mo’s gaffs cannot diffuse the awkward tension: “I’m a bit nervous. If I fart forgive me.”

The Baig family’s use of Punjabi sidelines Jo, but is no doubt entertaining for the TV audience. Mrs Baig refers to Mo as her ‘little khota’ (‘little donkey’). 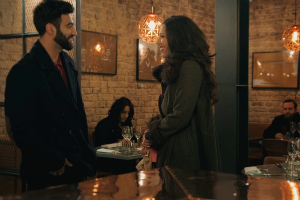 Later, Mrs Baig asks: “Can you make roti?” Jo replies: “No but I’m a fast learner though.”

Anj asks Jo what she thinks of shalwar kameez, Jo responds: “Yeah I like it.”

Jo’s enthusiasm to adapt is admirable. But Mrs Baig would like her to dress more traditionally. What will Jo be wearing next time she meets Mo’s family?

Moses has a surprise for Jo for Valentine’s Day. But this is the same day as his mum’s birthday. Will he be able to keep both women in his life happy?

Anj sets up a date between Owais and Feryal 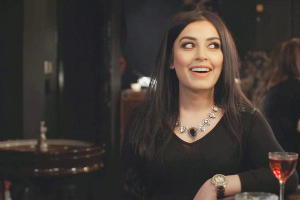 Anj stays true to his word about finding Owais his ‘Mrs Khan’. Anj says: “I think that she’s definitely the one for you.”

Feryal impresses Owais from the moment she enters into the room. He’s so nervous that he is stuttering profusely.

But he uses his stammer to charming effect as usual: “I’m honestly very fffflattered that you agreed to meet.”

Feryal appears to be a picture of calm. But she admits: “I’m trying to keep my cool right now, you have no idea. I have never done this before. I’ve never had a boyfriend.”

Feryal makes it clear that she intends to get married. Both agree to meet again. Feryal says: “Let’s do this!”

Owais and Yasmin hug it out at Ravi’s Party 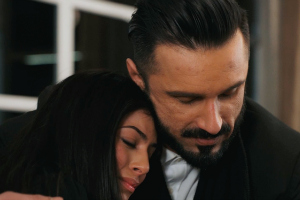 Ravi suggests to Yasmin and Kavita that at the dinner party later, they have name badges for each seat, such as ‘Yasmin the Cow’.

Kavita shows that she is a funny one with her impressions. And even Yasmin shows a sense of humour (‘er…hashtag sarcasm’).

Owais calls over Yasmin to make up. Yasmin says:

“I did over-react and I was a bit of a drama queen. It brought me back memories. I feel like I have been mocked my whole life.”

They both apologise and hug it out. They then laugh when Yasmin says: “Okay, this is a hug too long.” 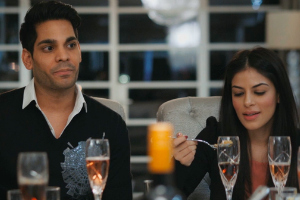 With everyone sat at the table, Raj asks Owais about his date with Feryal. Owais says: “It went that well, I brought her with me today.”

Rish Ravalia, perhaps unhappy that he is still single, is ferociously stirring the karchhi (ladel) in the pateela (pot) of dahl (lentils).

Adam does not look impressed. Ravi Gurtata has a dig at Rita. Rita protests: “This is all really immature.”

But Rish jibes back: “And getting Owais to rock up to a party topless is not immature?”

Comments are flying around like a pin-ball machine. In the end, Owais leaves. Rita follows. Feryal does not look impressed.

The Rita and Owais bust-up 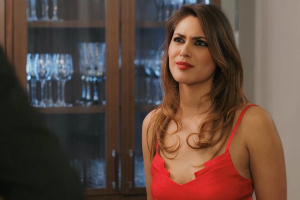 Rita says: “You’re making out like I’m all over you and overly keen.

“I’ve made it very clear from the start that there is nothing more than friendship and training.”

Owais bursts into laughter: “Are you trying to convince me or yourself?”

Rita says: “If you couldn’t handle it, and you can’t handle my personality, then you should never have let it develop and go further.”

Owais believes that he has been unfairly treated. He says: “As soon as other people turn up, you put on this really cool front like, ‘I haven’t got time for Owais.’”

He adds: “I feel sorry for a boyfriend who cares for you more than you care for him.”

Owais walks off, leaving Rita in tears. Was Owais wrong to flirt with Rita, and use her as the target for ‘lad-banter’? Or did Rita lead Owais on, and secretly enjoy it?

What will happen in the next episode of Desi Rascals? Tune into Sky Living on Tuesday 17th February 2015 at 8pm.