David Gilmour explores Colonial History in ‘The British in India’

Writer David Gilmour offers an engaging insight into the lives of the British men and women who inhabited colonial India in his book, The British in India.

"In a curious way India in those days was every English person’s home, even if it had not been visited"

Over the course of 600 pages, Gilmour recounts the livelihoods of those British men and women who ventured into the far-off and colourful east from the letters and journals they kept.

He uncovers almost every aspect of British life in India. From life-threatening sea voyages to setting up homes with Indian mistresses, to the mighty power of the military officers and their garrisons.

While Britain’s colonial rule of India remains a contentious issue among modern-day historians, Gilmour attempts to navigate the ordinary lives of soldiers, businessmen, doctors and missionaries away from an overarching political point of view.

By doing so, he offers an engagingly rich narrative of British-Indian social history that extends over three hundred years in a vibrant and diverse subcontinent.

How Many British Men and Women really Went to India?

Perhaps one of the surprising truths the average reader will come upon is the small percentage of Britons that actually lived in India at all.

In his opening pages, Gilmour notes that the glamour of the ‘Orient’ and it’s coveted status in Britain extended predominantly to books and local discourse.

Punjab was the province most populated by the British due to its garrisons and military camps. Despite British presence being so predominantly military as opposed to ‘non-officials’, even the British Army only saw one Englishman for every six Indian soldiers.

“The largest concentrations of British civilians were in the great cities of Calcutta and Bombay. In 1901, 11,591 of them lived in Calcutta, sometimes known as the second city of the empire (after London), alongside a million Indians.”

The scarcity of British men and women in India is something that Gilmour keenly discusses in Part One:

“So sparsely were they spread that many Indians seldom saw an Englishman unless they happened to live in a city or near a barracks.”

British women found themselves even more outnumbered, namely 7,000 to one.

Many arrived into the country after marrying Army officers. Isolated in their unfamiliar surroundings, they were separated from their family and the amenities of home.

It is interesting then, that even with so few numbers, the impact of British culture and values on India and her inhabitants was a lasting one.

So strong were the sentiments of Britishness and the apparent ‘civilised lifestyles of the west’ that the imperialists were able to successfully conquer India through both force and intellect.

And these shared values were carried on through generations of Eurasians and Anglo-Indians, as the British began to settle and cohabitate in their adopted land.

The Lure of the ‘Orient’: A Wealthy Playground

Much of David Gilmour’s book illustrates why the few men and women who ventured to the exotic east did so in the first place.

These motives stem outside of the political and imperialist sphere. Instead, Gilmour lists numerous social advantages that a life in India could attain.

From romantic notions of the ‘Orient’ to a barbaric land that was lucky to have the opportunity to civilise itself, the image of India back in Britain was rife with contrasts and contradictions.

As a result, those individuals who did travel abroad were guided by prior perceptions, or perhaps more aptly, misconceptions of what India really was.

The more amorous views of India were inflated by the popular works of authors like Rudyard Kipling. And Gilmour notes that many were drawn towards the country after simply reading Kipling’s books and poetry.

Other esteemed scholars also described India’s exoticness without ever actually having visited the place.

Gilmour states that images of a glittering land with Maharajas and elephants became commonplace in Britain during the height of its reign. They became enticed by a sense of adventure and the opportunity for unbounded sport and ‘shikar’.

For some, including Queen Victoria, India was the ‘glittering jewel in the crown’ of expansive empire. It was also considered a land that held incredible wealth, just waiting to be claimed by opportunistic go-getters.

As a result, much of the population back home felt a close affinity to India, despite having almost nothing to do with it. Indeed, novelist Paul Scott wrote:

“It is difficult to describe but I think in a curious way India in those days was every English person’s home, even if it had not been visited. Because we ruled it and benefited from it, it contributed to our well-being and upbringing. It was mysteriously in our blood and perhaps still is.”

Others, however, viewed India as a primitive and wild jungle that was home to a people who led ‘uncivilised lives’.

Many missionaries felt that it was their ‘duty to God’ to go to India and bring her inhabitants out of their so-called ‘darkness’ and towards the light of the west.

While altruism did exist, in the construction of the railways and the implementation of welfare, unsurprisingly, arrogant tendencies swept through almost all classes. Gilmour recalls viceroy Lord Mayo telling the lieutenant-governor of the Punjab:

“Teach your subordinates that we are all British gentlemen engaged in the magnificent work of governing an inferior race.”

This close connection to a foreign country invited a seemingly blasé attitude of the British towards their ‘other homeland’. Some fathers used the threat of being sent to India as a kind of punishment for the ‘black sheep’ in their family.

Indeed many young men who found themselves on the wrong side of society’s unforgiving lens were quickly packed up and sent into exile.

Others, who had suffered financial misfortune through business and the booming tea trade, decided to try their fortune in India. Here, they were able to take advantage of the privileged opportunities available only to the colonialists.

In essence, India and all her wealth and riches were available to be pilfered and looted on the whim of her imperialists. And it is apparent from many of the letters within The British in India, that many British men and women were happy to take advantage of what the country had to offer. 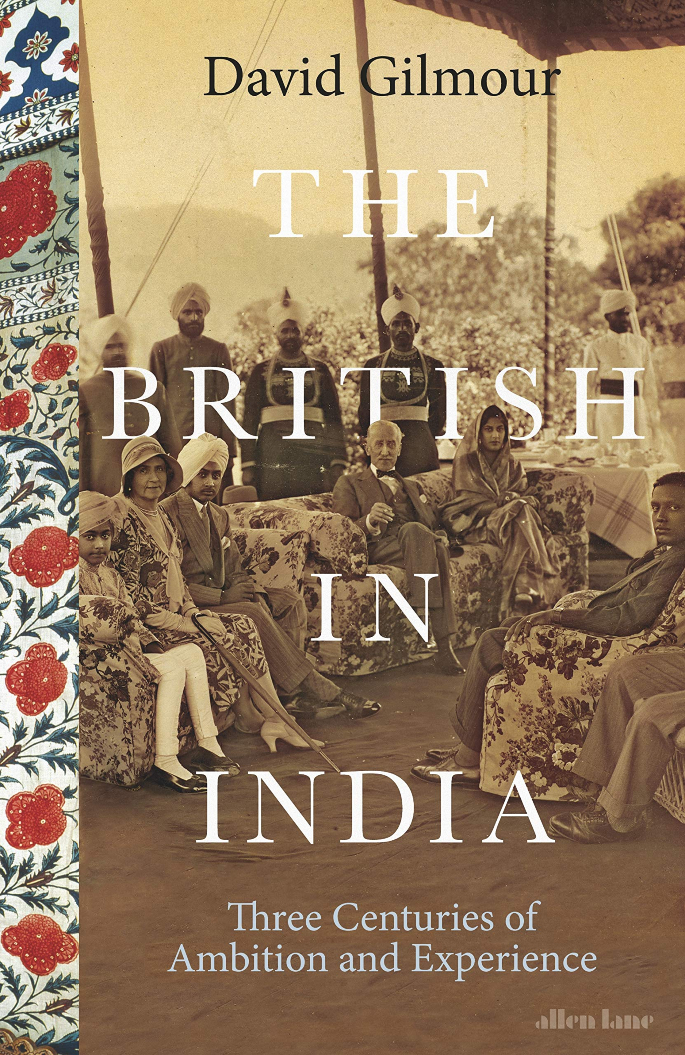 From Indian Mistresses to Evolving Attitudes

The attraction of India for English men was not just its imagined wealth, but also its women. Gilmour writes:

“Most British men in India spent at least part of their careers living with at least one Indian or Eurasian woman – usually more than one, and often for most of their time in India.”

While interracial marriages were still very few, and widely frowned upon, some men opted to keep a ‘bibi’ or native mistress.

Gilmour relays numerous young men who, by doing so, fathered several half-Indian children before then going on to marry an English woman in an attempt to appear more respectable.

Interestingly, while ‘bibis’ were given many privileges in initial years, the arrival of more English women into India saw a decline in the trend of keeping a native mistress.

British customs later declared interracial relationships to be improper. Gilmour writes that there was even an attempt to “efface her from British history”.

It was not just men who formed sexual relations with Indians, a smaller number of British women did so too.

Illicit or adulterous relationships were likewise commonplace in the hill stations of Simla and Gilmour shares numerous tales of secret affairs.

Both men and women engaged in infidelity during lengthy absences from their spouse. For British women, in particular, Gilmour notes:

“Many were unhappy with their marriages – and the strains that India put on their relationships.”

Attitudes towards their adopted homeland, both good and bad, rapidly changed in the last decades before independence. While mixed marriages did take place, it was largely under the guise of secrecy.

Relations between Indians and the British in other social circles also began to break down. As Gilmour states, the rebellion of 1857 proved to be a pivotal turning point.

In the aftermath, it was not just the British who were unwilling to engage in friendships with the colonised. Indians were also less keen to stand to attention.

Gilmour adds that the common phrase, “Going Native” was not a lauded one.

In fact, it was indicative of someone who, “was slightly suspect and ‘unsound’, who sympathised too much with the native peoples, who had certainly ‘gone too far’ and might even be potentially disloyal”.

Readers will note, as they progress through The British in India, that the English made very little attempt to integrate with the locals as a result.

Rather than adopt the customs and characteristics of their hosts, they brought their own culture with them. Right down to their members-only clubs that mostly refused Indian entry.

Three Centuries of Ambition and Experience

Without a doubt, Gilmour’s The British in India has been exhaustively researched and offers the biographies of individuals from a wide array of backgrounds.

What many will note, however, is Gilmour’s insistence to remain neutral on the political ramifications of the colonial period.

In particular, his closing remarks make a strong plea to distance Britain’s social history in India from its imperial one.

While admirable to showcase a positive side to the empire, it is invariably a tricky move. And sometimes at odds with the unfiltered views of the biographer’s subjects.

As we read through the extracts and letters of the British, derogatory and racist sentiments are at times glaringly obvious.

While not always cruel, they come from a place entitlement and privilege. And we find ourselves inadvertently rooting for the underdogs. Namely, the mixed-race child who is bullied simply because his white father decided to amuse himself with a brown mistress.

One wonders how many of these individuals who sought their fortunes in India did so at the expense of the locals. Was the country really so barbaric that it required a saviour?

Such questions have been and will continue to be debated for decades.

But it would be insightful to be able to read the letters and journals of the Indian civilians working alongside these British men and women in Gilmour’s book, even if just to gain a wider appreciation of life in India during the British Raj.

That said, The British in India: Three Centuries of Ambition and Experience is still remarkably comprehensive. Well-researched and engaging, it offers an enlightening look into the day-to-day goings on of British men and women in India. Without judgement.

And with so much still to uncover about Britain’s colonial history, that in itself deserves recognition.