Amir riles up Kell Brook on ‘Meet the Khans’

In the second episode of ‘Meet the Khans’, things got heated as Amir went face to face with rival Kell Brook at their first press conference.

"You need to stop being greedy."

The second episode of Meet the Khans: Big in Bolton sees Amir and longtime rival Kell Brook come face to face while Faryal gets her makeup brand back on track.

The episode begins with the couple discussing Amir’s trip to the United States as he prepares to begin training camp.

Amir says: “I’m sure you can deal with things without me.”

Faryal admits that she will miss their arguments and funny interactions with each other.

Amir adds: “I’m gonna miss you yelling at me, shouting at me all the time, telling me to do this, do that.”

Faryal’s bossiness is something that Amir apparently finds attractive as his wife probes:

“Do you find it attractive when I’m the boss?”

Amir brushes it off but Faryal believes he does, leaving Amir with a confused look on his face.

The talk of retirement comes up as Faryal urges Amir to quit boxing after his bout against Kell Brook.

She tells him: “I think this is it. You need to stop being greedy.” 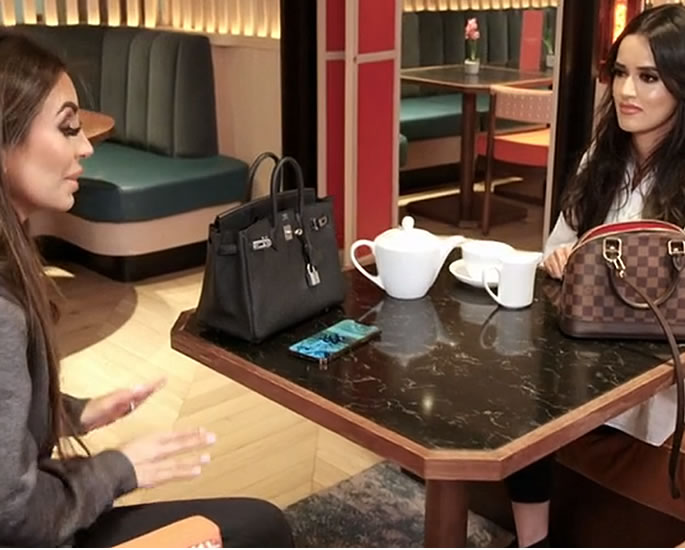 At Manchester’s Lowry Hotel, Faryal reunites with good friend and business partner Khadija as they prepare to talk about their makeup brand.

Faryal admits that she is stressed by Amir’s upcoming fight, revealing to Khadija that it has taken over her life.

While Faryal has been in Dubai, Khadija has been running their makeup brand.

As they continue coming up with ideas on how to launch their brand, Faryal brags:

“It’s great being us because we’re good at everything.”

The pair then fantasise about becoming billionaires and what they will do with the money.

Meanwhile, in London, Amir continues preparing for his fight promotions by going to a tailor for a stylish suit.

Amir tries on a blazer and shirt but as he waits for some trousers, he struts around in his boxers.

He then tries on a shimmering red blazer, however, Amir said it was “too flashy”.

After trying on suits, Amir notices a custom suit that was made for Tyson Fury as well as some of his fight shorts.

Amir realises how big Tyson Fury is when he tries on his blazer and the sleeves cover his hands. 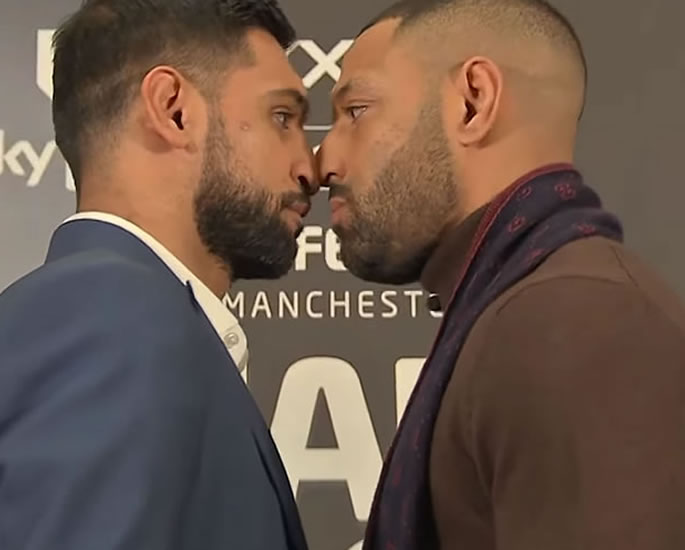 As Amir prepares for his first press conference with Kell Brook, he explains that his entourage, including his father, are always there in the lead up to his fights.

Backstage, Amir speaks to his friend Maz who advises him to emphasise his dislike for Kell Brook during the press conference.

Amir calls the press conference “the first round” against the opponent.

He and rival Brook then go face to face for the first time and things quickly got heated.

The rivals go nose to nose before Amir shoves Brook. Security intervenes as the pair continue to go back and forth. Meanwhile, Faryal looks on.

Throughout the press conference, the pair trash talk each other, with Amir calling it “banter”.

Faryal sits backstage and admits that she is finding it “hilarious” because she has never seen this side of Amir.

“He’s actually cracking some really funny jokes. I’m like, ‘I wish you were that funny at home’.”

Amir continues to rile up his rival as Brook declares: “I’m knocking you spark out!”

Amir tells the camera that he believes Brook is jealous of his fame, both as a boxer and as a celebrity, saying: “It’s literally like he’s a fan.”

Faryal also believes that her husband is getting into Brook’s head.

She later speaks to Sky Sports, leaving Amir with a stunned look on his face.

A preview of episode three shows Amir in the United States beginning his training for Kell Brook and eldest daughter Lamaisah wishing him Happy Birthday via FaceTime.

Meet the Khans continues on May 12, 2022, on BBC Three. All episodes are available to stream on BBC iPlayer.

Dhiren is a journalism graduate with a passion for gaming, watching films and sports. He also enjoys cooking from time to time. His motto is to “Live life one day at a time.”
Ghum Hai Kisikey Pyaar Meiin fans disappointed over Surrogacy Track
Poonam Pandey reveals she suffered a Brain Haemorrhage