Amir Khan and Faryal Makhdoom have unveiled their new home in the Manchester countryside, complete with gym.

“Hot tub there, it’s got everything really."

Amir Khan and Faryal Makhdoom have shown off their new lavish Manchester mansion.

The Khans were originally set to move to London, with the couple also owning a home in Dubai.

But after Amir was robbed at gunpoint for his £70,000 watch in the capital city, it seemed that the couple has had a change of plans.

Instead, Amir revealed that he has purchased a new family home in the Manchester countryside.

The house has a children’s play area, a lake and a gym. The house even has an outdoor maze.

The boxer said: “At the house, Manchester, beautiful. Beautiful – got my gym right there don’t think I’ll be using that now we’re retired.

“What do you think guys? The back is amazing, we can have a lot of barbeques with the weather being so nice. Do a few barbeques and stuff.

“I don’t think I’ll be swimming, but we’ve got the barbeque set and everything.”

Amir went on to say: “Hot tub there, it’s got everything really.

“Kids play area down there, obviously we’ve got to make sure the kids are going to be happy.” 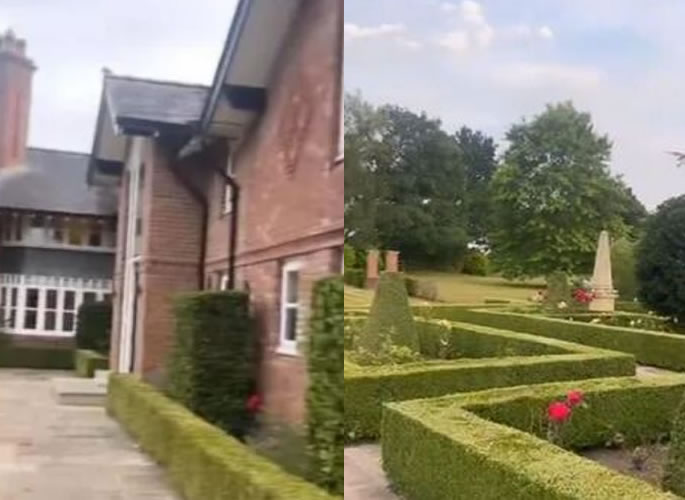 Faryal and Amir were previously seen heading to the launch of Manchester restaurant SakkuSamba in time for Faryal’s birthday meal.

Amir Khan had taken to Instagram to wish his wife, calling her his ‘queen’ with a picture taken from their reality show Meet The Khans: Big In Bolton.

In a video, Faryal was seen sitting on a bed in a floral dress.

The camera then zoomed in on a decadent box. Faryal pulled off the box sleeve to reveal another box inside a suede carrier which bore the luxury watch brand’s name.

She removed the carrier to show a wooden box, complete with glossy varnish and brand logo.

The couple were later seen at Pasha Vibes, a shisha lounge in Manchester, as they settle into their new home.

Fans are hoping the couple will announce a third series of Meet The Khans going behind the scenes of the move and the end of Amir’s boxing career as he announced his retirement shortly after his defeat to Kell Brook in February.

The couple are currently in Manchester but are expected to head back to Dubai.

The couple have become less active on social media, with Faryal making her Instagram profile private.

Meanwhile, Amir has taken down a TikTok video showing off his house and has deactivated his Instagram account.

Dhiren is a journalism graduate with a passion for gaming, watching films and sports. He also enjoys cooking from time to time. His motto is to “Live life one day at a time.”
Businessman ran £40m Drug Ring to fund Lavish Lifestyle
US Indian Woman commits suicide after 8 years of Domestic Abuse