Akshay Kumar is ‘Fired Up’ about Prime Video ‘THE END’

Bollywood star Akshay Kumar has wowed audience appearing live on stage at the Amazon PrimeVideo IN event lit up in real flames.

"Trust me, this is only the beginning ;)"

Bollywood hero Akshay Kumar never ceases to amaze audiences with his stunts and action-packed performances in his films.

Now, he has taken it a step further by appearing on stage lit-up with real fire for his association with Amazon Prime Video India for a new series, for now, titled ‘THE END’.

He wowed fans who cheered his walking onto stage doused in fire protective fluid wearing a black suit which was lit up in flames from behind all over his body.

The event promoting the Amazon Prime Video India association with the superstar definitely lit up with this live stunt.

“Literally, all fired up for my association with @PrimeVideoIN’s THE END (working title). Trust me, this is only the beginning ;)” 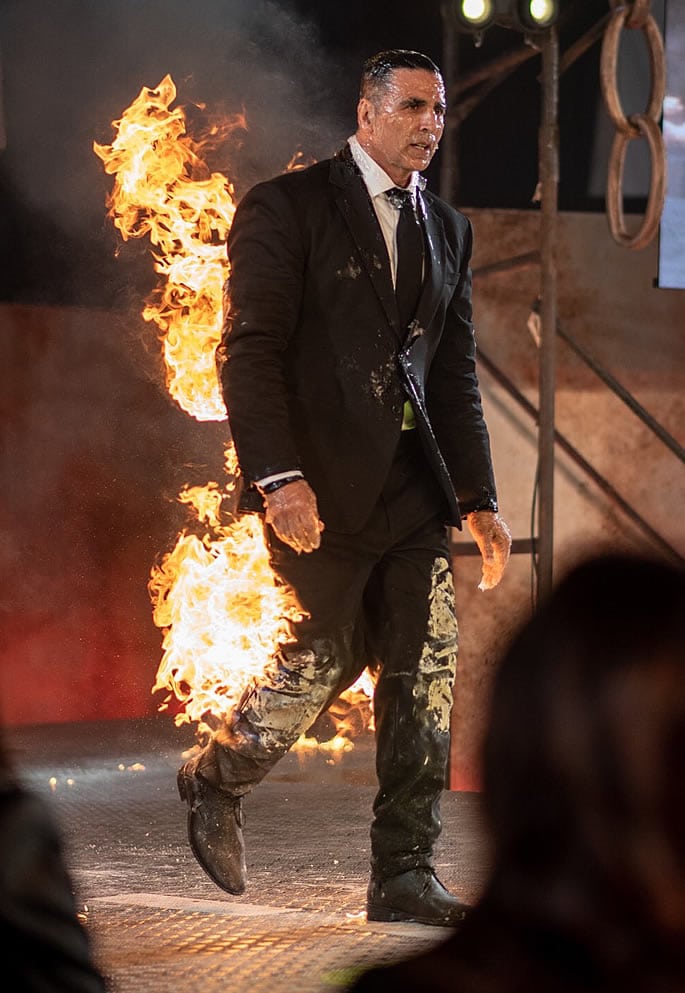 The star has appeared in numerous Bollywood films where the stunts and action have always been performed by him and no stunt doubles. You could say he is the ‘Tom Cruise’ of Bollywood.

This live appearance with fire on stage definitely confirms that Akshay does not hold back to prove himself as an action hero and ‘THE END’ which is a working title, is something to watch out for on the Amazon Prime Video India platform.

Watch the video of Akshay on fire: 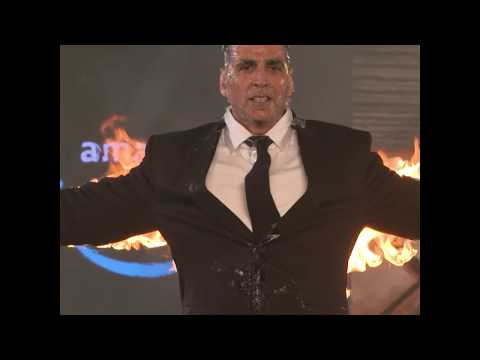 At the announcement, Akshay was joined by Jennifer Salke, Head at Amazon Studios, Vijay Subramaniam, Director and Head of Content, Amazon Prime Video India and Vikram Malhotra, CEO – Abundantia Entertainment and Executive Producer, who are collaborating on the project. 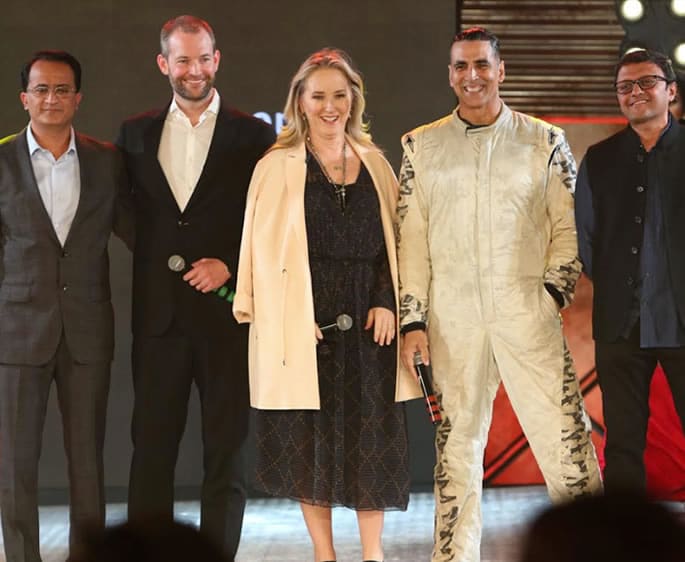 “The scale at which THE END (working title) is being conceived is enormous and speaks of our passion for creating breakout programming across genres.

“The storyline and the action sequences have been brilliantly crafted to give viewers a thrilling experience.

Our goal is to make Amazon Prime Video the powerhouse of talent, in front as well as behind the camera, and we are thrilled to have Akshay Kumar and Abundantia Entertainment anchoring the show for us.”

“We are excited to bring Akshay Kumar to Amazon Prime Video, closer to millions of his global fans, to recreate his magic and offer something spectacular.”

“Akshay and I have successfully collaborated on multiple films over the last decade and his versatility in choice of roles is unmatched.

We, now, mutually felt that it was time to take things to the next level. I am proud that he makes his digital debut with Amazon Prime Video and Abundantia in a genre-defining, edge-of-the-seat
action drama series.

“Unafraid of taking risks, we are certain that he would be perfect for the character he plays on the show and his fans would be excited to see him back in an action-packed role.

“This time, Akshay will take his action and stunts to a never-seen-before level. I am equally delighted to once again work with the wonderful team at Amazon Prime Video and take Abundantia’s high-quality.”

“I have always believed in bringing innovation to my work and throughout my career, have tried to tell unique stories, work with break-through talent and be part of disruptive and high-quality story-telling.

“Together, Abundantia and I have created some of my most memorable roles in films like Baby, Airlift and Toilet-Ek Prem Katha and their passion towards their films and projects is incredible.

From the very concept of the show, I am working very closely with Vikram and his team as they create this compelling and highly intriguing story.

I can’t wait to start rolling for this action-adventure series that will be Amazon Original for global audiences.

The digital world excited me and I am delighted to make my streaming debut with this show.

“And if I were to make a small confession here, it was my son Aarav who suggested that I make my digital debut as that’s what the youth is hooked onto.

“On this medium, I want to create something extraordinary and connect with them”. 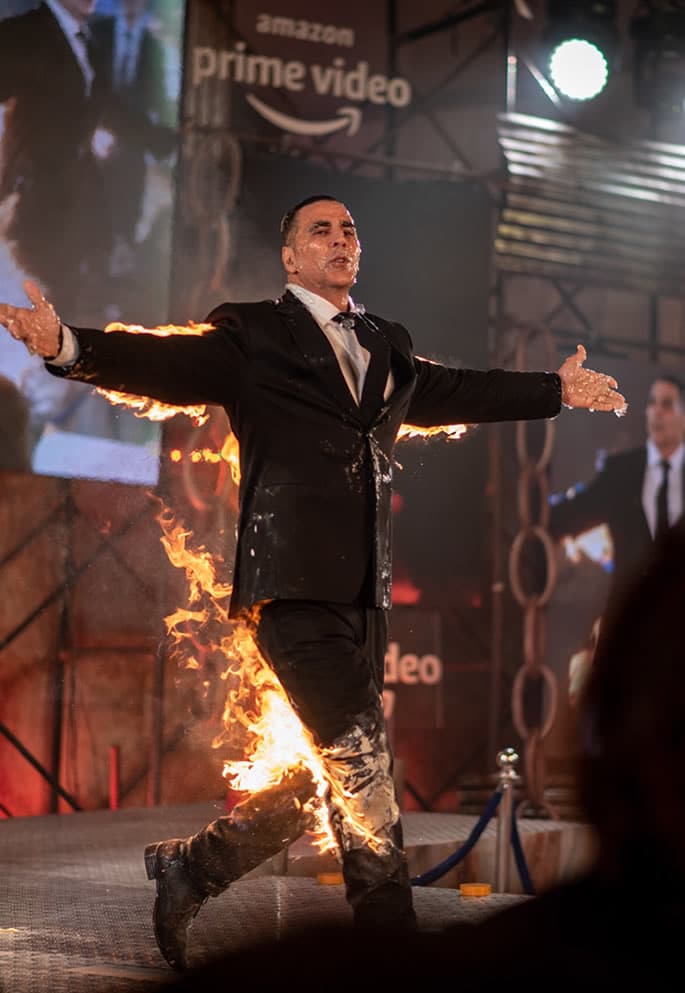 Amazon Prime Video IN is the rival platform to Netflix in India who have made successful inroads into the country with original shows like, Sacred Games, starring Saif Ali Khan and Nawazuddin Siddiqui, and Ghoul, starring Radhika Apte.

With Akshay joining team Amazon, it looks like they are serious at targeting the Indian market with original films and series too. Providing direct competition for Netflix and other Indian streaming platforms.

With streaming platforms becoming more popular in India, they are becoming another medium for Bollywood stars to present their showmanship and acting acumen. 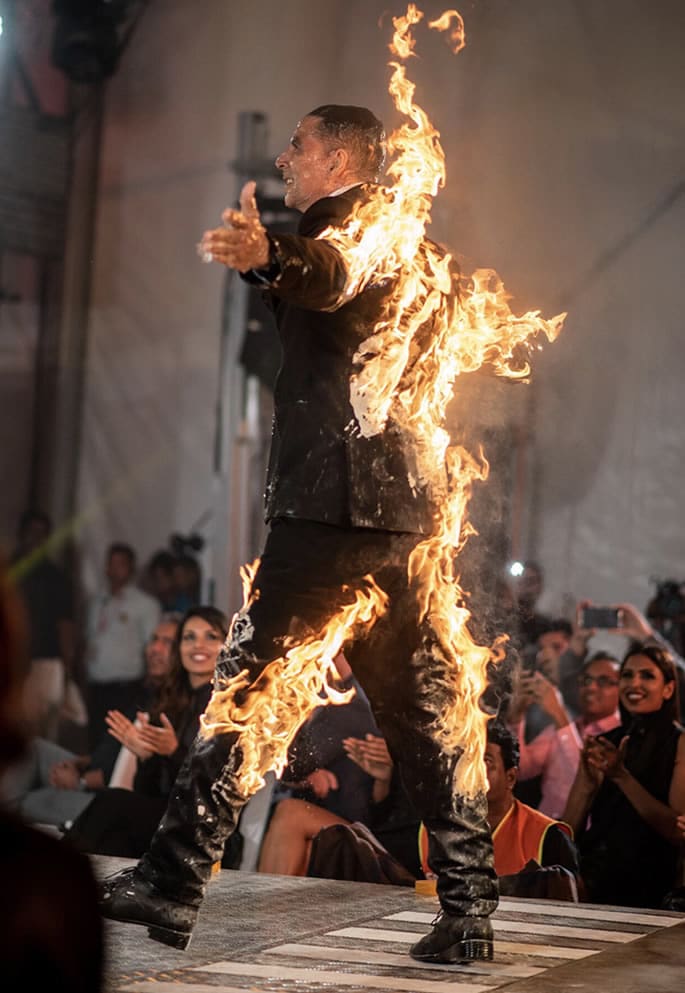 No doubt, this stunt from action man Akshay Kumar has created huge intrigue about his part in ‘THE END’ and with him saying this is “only the beginning” it will be interesting to see what he has planned in forthcoming offerings on Amazon Prime Video India.