The World Awaits House of iKons

“Working with The Princes Trust is a great honour and their support has been phenomenal."

The House of iKons global fashion event will be held during London Fashion Week (LFW) at the beautiful Hilton London Paddington Hotel.

Causing a media stir here in the UK and abroad, the Lady K Production Team and founder of House of iKons, Lady K, is breaking all boundaries and bringing the fashion world under one roof with new and upcoming designers.

For the second year in a row, DESIblitz can exclusively reveal that The Princes Trust will also be supporting the Lady K Production: “This is a long term relationship with the Trust. Any show that I produce in London will always be in aid for The Princes Trust,” says Lady K. 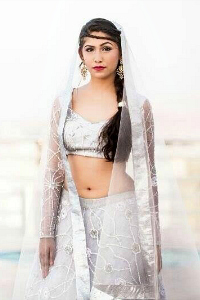 Lady K added: “Working with The Princes Trust is a great honour and their support (second year in a row) has been phenomenal.

“We will be fund raising on the night, as well as donations from guests and my production team, we will be raffling four high couture one-off pieces worth between £30,000 and 10,000 each for a minimum donation of £10.

“We are also speaking to an exclusive Knightsbridge diamond jeweller who may be donating some diamond jewels for the raffle for The Princes Trust.”

Lady K is also thrilled to welcome more fashion talent to the growing designer showcase. One de-signer who has caught her eye is Sherin Mansoor who boasts an unusual twist of Asian and Western fusion.

A seasoned designer hailing from Bhopal, India, Sherin’s origins find an important place in her work and reflect prominently in it. She strives to merge the elegance and richness of this Mughal City ruled by female monarchs, with elements of modern chic twists to her collection.

Sherin says: “Over the years my love for fabric and the infinite possibilities it presents had only blossomed evermore. I want to continue designing, experimenting and bringing the kind of joy and pleasure only an exquisitely beautiful raiment can bring someone.” 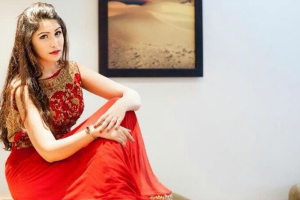 Sherin is the first designer historically to have gained international interest. She won Best Female Designer for The Arabs Group (July 2013, London). This has pushed her creativity further. Sherin is very excited exhibiting to a wider audience at House of iKons LFW.

Another DESIblitz exclusive is that Chinese RnB sensation Ayi Jihu will also be performing exclusively on the night of the House of iKons. This #iKonic artist has developed into quite a fashion #iKon herself. She started as a Brand Ambassador for Young Native Fashion helping to put Angela DeMontigny on the map as one of the world’s foremost Native American Fashion Designers.

Her recent collaboration with Rose Perkins, under her label Fashionsistas graced the catwalk for the first time under the Lady K banner last September LFW; since then it has been catching the fashion world’s attention. Fashionsistas designed all the outfits for Ayi’s historical tour of Brazil and her carnival performance.

Lady K admits: “We are excited and overwhelmed that Ayi an amazing and established artist will be performing on the night of the show. Her International following is phenomenal. She is a true #iKon within her own right.

“Ayi is bringing the music industry together with her ethos of bringing the east and west together similar to what we are doing. Fashion is for everyone, anywhere around the world just as music is.”

“Her collaboration with one of the most iKonic artists worldwide Tito Jackson is a testament within itself. We are all #teamAyi and will continue to support her success always.”

Speaking about her new venture into fashion, Ayi Jihu admits: “These are exciting times for me. I never really saw myself doing anything in fashion because I thought I was too short. I love working with Fashionsistas. I love the clothes she makes and she really understands me and I feel she has got a great handle on what young women want to wear.

“I’m looking forward to performing at LFW at the House of iKons show. It’s great to be something with The Princes Trust, an organisation I really respect that does a lot of good things and really helps young people in UK. 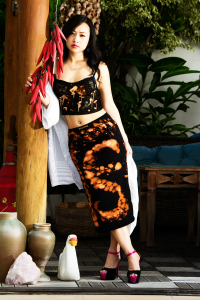 “Lady K reminds me of myself, she has built a mini fashion empire with her own two hands. I am happy to be associated with House of iKons and I will support them all I can.”

Ayi at present has been causing a great stir in Brazil for the World Cup 2014. Her song with Brazilian singer Edu Casanova ‘Ilumina (Shallallaja)’ (German version has Toni Tuklan) has done incredibly well in Germany and Brazil and is becoming the unofficial Official World Cup song outdoing the likes of Jennifer Lopez and Pitbull in Brazil.

Even though it was not meant to be a World Cup song, with backing from Brazilian star Dani Alves and both Brazil and Barcelona football teams on the track has pushed it through the roof.

The show is moving at a very fast pace before it has even begun. Plans are also in full swing for the official Fashion Week launch in Dubai, UAE November 2014. PR company, Showline Media, is handing everything for the Dubai show where major international press, media and TV have con-firmed they will be covering the event.

With all this buzz, House of iKons is excited for all involved; and what new doors will open next for whom under this unique roof!

Nazhat is an ambitious 'Desi' woman with interests in news and lifestyle. As a writer with a determined journalistic flair, she firmly believes in the motto "an investment in knowledge pays the best interest," by Benjamin Franklin.
Noreen Khan Couture is stylish signature Fashion
London Collections: Men Spring/Summer 2015