London Collections: Men is a fashion event that occurs every year, showcasing the best of upcoming British fashion for men. DESIblitz has all the highlights and explores the rise of men’s fashion in the UK.

"The capital’s men are the sharpest dressed around, so it’s time to puff out our plumage!"

Gone are the days when men would wear anything that retail companies supplied.

Todays men pick their fashion pieces beyond functionality. They look out for flattering and attractive fashion pieces for a range of occasions; from weddings to a casual day out.

Sales have grown almost 5 per cent in the last year as clothing retailers have increasingly turned their attention to menswear. 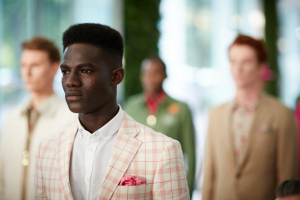 Even the mayor of London, Boris Johnson, is launching a new campaign, ‘London Home of Menswear’, which runs across the London Underground network in January.

He aims to raise awareness of how this industry makes a vital contribution to London’s economy and to engage the wider public in menswear:

“Today’s new figures prove that London is without doubt the home of men’s fashion, supporting increasing numbers of businesses and jobs. The fact that menswear is expected to grow by a third in the next 5 years is testament to our unrivalled heritage and the visionary designers dominating our catwalks. Plus the capital’s men are the sharpest dressed around, so it’s time to puff out our plumage!”

London Collections is a pool of events designed to showcase the breadth of British fashion talent, from the world’s most innovative emerging talents to global menswear brands and Savile Row tailors.

The events are led by the British Fashion Council, a non-profit organisation that aims to promote the interests of the British fashion industry. 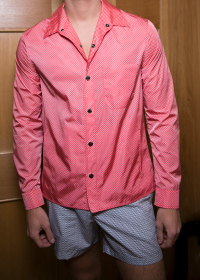 For 2014, 68 designers have participated in shows and presentations and the Designer Showrooms exhibited collections by 71 designers. International press and buyers from 33 countries attended the London Collections: Men in June.

A striking feature of London Collections: Men for spring and summer 2015 is how unique the inspirations were. The designers had cleverly wove these novel inspirations and themes into each of their pieces.

The inspirations were vast, showing how increasingly experimental designers are becoming when it comes to men’s fashion. The designer of ‘tobefrank’, Frank Phillips said:

“[I had an idea] to make every man wearing ‘tobefrank’ feel like a superhero. I was very inspired by World War One and the real life superheroes.”

She brought her inspirations to life through making her designs feel like an armour for men. From 3D printed buttons to fireproof and acid proof wear. Her designs had been made by Hainsworth Mill, the same mill that made World War One outfits and the uniforms of current fire fighters.

Make your Odyssey had a theme of above and below the surface. Above is the social aspect of travelling with shirts of sunset shades and casual beachwear. Below is enigmatic and featured the use of silhouettes along with a wet suit look through the Jacquard weave.

Blood Brother encompassed the theme of a human virus and a computer virus. The collection ranged broadly from a t-shirt displaying infected and non infected blood cells, to a sweatshirt communicating how the first ever computer virus was a love letter and what codes were involved. This showed how fashion ensembles are being used as a means of communicating a message rather than simply being something that is functional. 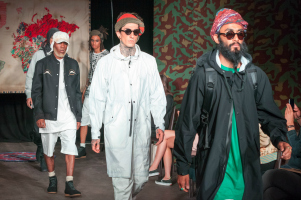 Indefinitely Wild had a Spring/Summer 2015 collection entitled ‘Above the Trees’. It featured printed long-sleeved shirts influenced by North American road tripping and adventuresome exploring. The signature look is casual shirts experimenting with different print techniques and textures including, screen print and digital print.

London Collections also showcased accessories. Eye Respect is a company that is handmade in Italy. They have exhibited their designs in runway shows during the London Collections, including the likes of Oliver Spencer, Topman and Maharishi. A bow tie company for men and women called Velsvoir, showcase their designs in both Dubai and London but are handmade in London.

Lyle and Scott is an established brand of over 140 years. How does a brand established for this long diversify itself to create something new for 2015? This is by its collaborations with 2 designers that bring something novel to the signature look of Lyle and Scott.

An interesting aspect of these collaborations is that the trousers do not have the regular Lyle and Scott cut but that of the collaborative companies instead. In the SS15 collection, they teamed up with Jonathan Saunders and Universal Works.

A must for any fashion conscious individual, London Collections: Men saw 3 days of male glamour walk the ramp in some of the best designer wear available for Spring/Summer 2015.

While women’s fashion continues to reign the industry at the moment, it is clear that men’s fashion is becoming rapidly more important for the evolving London professional man of today, who are now happy to experiment with their wardrobes. We look forward to seeing what next season’s collection brings.