London Fashion Week returned for Spring/Summer 2016 with stunning designer collections showcasing the best of British fashion. DESIblitz has all the highlights.

Nargis Fakhri made appearances at a few shows, including Topshop Unique

A highlight of the London fashion calendar, London Fashion Week is a pretty big deal. Cue 78 designers, 52 catwalk shows, more than 5000 visitors and an industry worth £27 billion.

The likes of Zandra Rhodes, Jasper Conran, Shish, Burberry and Paul Smith had sell out catwalk shows. LFW SS16 was the place to be for celebrity sightings, with even some Bollywood faces among the crowd.

DESIblitz were invited to the Designer Showrooms to find out the big trends of LFW SS16. Here’s what we found:- 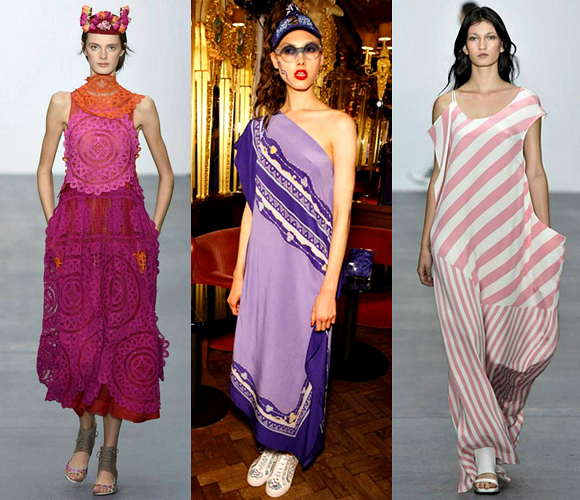 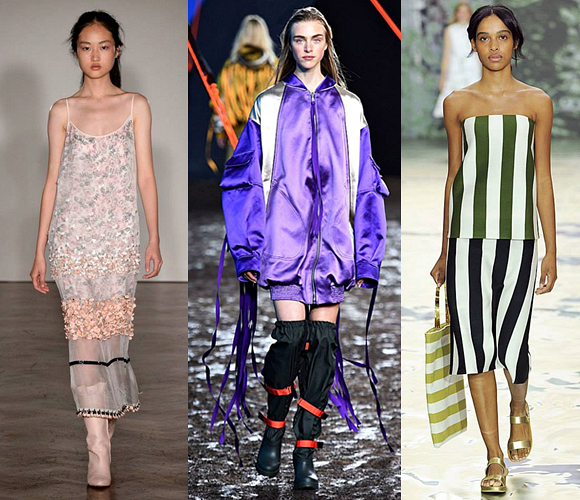 Day 2: Jasper Conran had all shades of green from leaf green prints to bottle green.

Mother of Pearl excelled with her trademark style of combining art with fashion, and many of her pieces were delicately pretty. 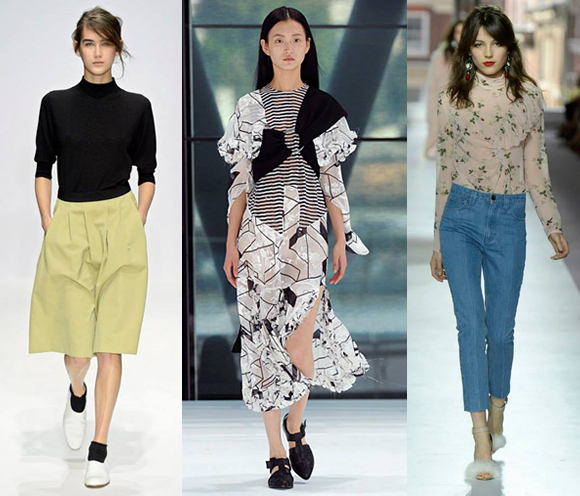 Day 3: Topshop Unique had a quintessential British theme, with models dressed for garden parties, and summer days at the cricket.

Preen by Thorton Bregazzi experimented with slits, cuts and patchwork. 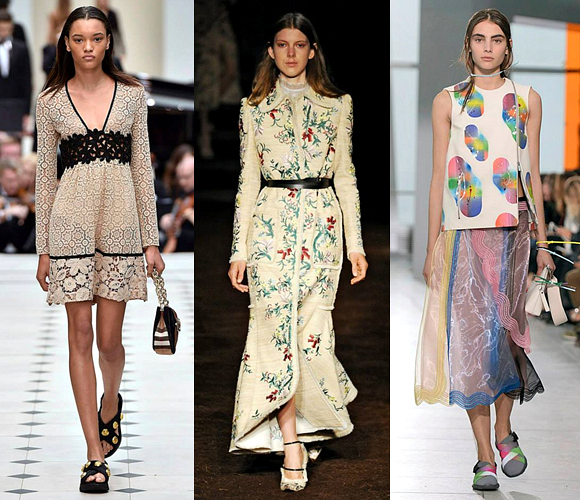 Day 4: Erdem celebrated their 10th anniversary by showcasing some of signature designs, such as floral prints, lace and chiffon, in a theatre.

Burberry had mostly trans-seasonal pieces. This meant a lot of black, and a lot of heavier outerwear paired with lighter, silkier, lacier layers.

Burberry once again led innovation as they became one of the first designers to showcase a live stream through snapchat. 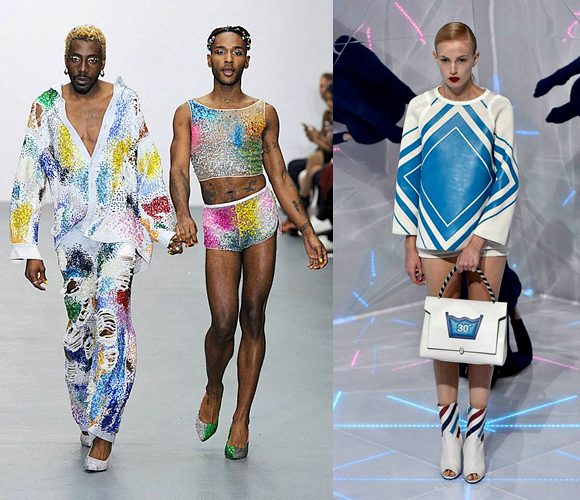 The biggest change about LFW SS16 was its location, which moved the fashion extravaganza from the historical Somerset House to one of London’s most vibrant, diverse and creative hubs, Soho.

More specifically, a car park in Soho was the venue for over 120 collections. But, why?

“Brewer Street Car Park is in walking distance to many of the magazines and department store head offices and is close to Oxford Street and the high-street stores that the UK is so well known for,” said Caroline Rush, CEO of British Fashion Council. 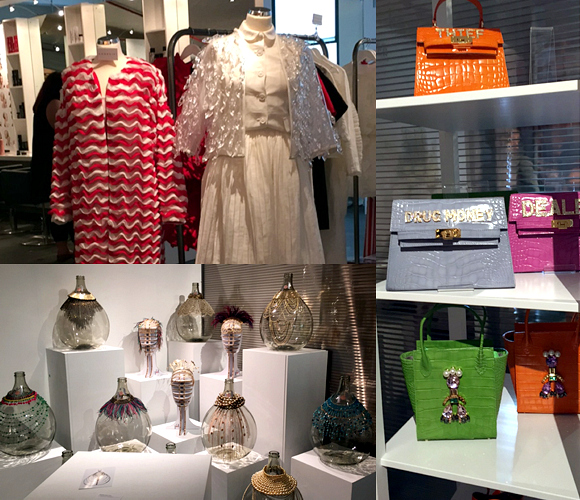 The key trends seen at the designer showrooms for SS16 is the presence of pop art, focus on multiculturalism, a new take on minimalism which is high on quality but low on flashiness and a unisex approach to shape and structure.

You could also see a greater use of chokers, ruffles, digital prints, and use of bright colours, like the pinks and the greens. Zoe Sherwood, who designs headpieces that convey sentences through wiring, says:

“The great thing about British Fashion at the moment is that it’s so expressive and people are interested in buying into ideas and thought.”

“What working with shoes at the moment are the thicker soles, slides and use of different textures,” said a representative from shoe brand, Kat Maconie.

Mawi was an eye-catching accessories brand that showcased earrings with large pearl backs and small purses with controversial job titles, like ‘Dealer’ written on them.

NEWGEN sponsored by Topshop had created pop up showrooms for emerging talent, including the sparkly disco fun collection by Sadie Williams. 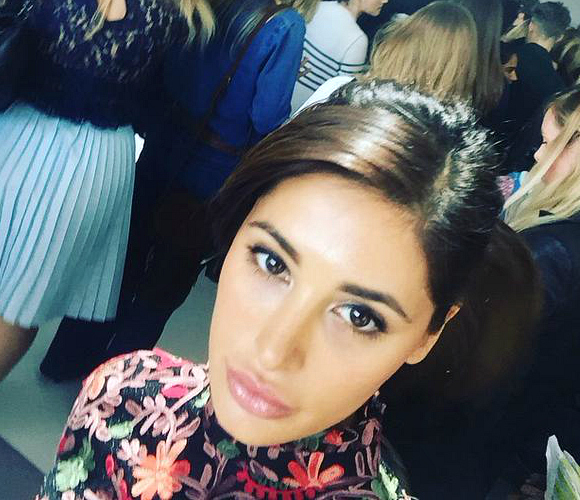 Despite many Bollywood shootings happening in and around the UK this summer, there was hardly any Bollywood at LFW.

Nargis Fakhri made appearances at a few shows, including Topshop Unique, squeezing it in along with Housefull 3 shooting which is also happening in the city.

The usual celeb crowd for LFW made a fashionable appearance at the front rows of several shows, which were Alexa Chung, Suki Waterhouse and Poppy Delevingne.

Ciara made an appearance as the brand ambassador at the Topshop show, MIA was at the Ashish show and Lily Allen at Mary Katrantzou.

The show which drew the biggest crowd was the Burberry show where the likes of Sienna Miller, Kate Moss and Naomie Harris were seen.

All in all LFW SS16 saw designers set their innovative sights in more diverse directions than ever.

From jackets to hair accessories, everything you could ever need in your wardrobe was showcased for Spring and Summer 2016 at London Fashion Week.

The success of this event and its immense growth has reinstated once again that London’s status as a key fashion city cannot be understated.