Fashion Pakistan Week (FPW) 2017, rides the fashion wave across Karachi and dips her toes into the Spring/Summer seasons of the nation.

Notably, this edition of FPW’17 celebrated its 10th year anniversary. And, once again, this two-day event was buzzing with excitement and gorgeous trends.

Embellished gowns, hair accessories, summery capes, and sophisticated men’s blazers were showcased on the runway. While some of Pakistan’s most famous faces were amongst the group of beauties swaying the catwalk.

The likes of Syra Shahroz, Sana Javed, Imran Abbas, and Javed Sheikh were dressed to represent their allocated designer’s collection as celebrity showstoppers.

While each piece was a treat for the audience, here are the remarkable aspects that caught our eye from Fashion Pakistan Week 2017. 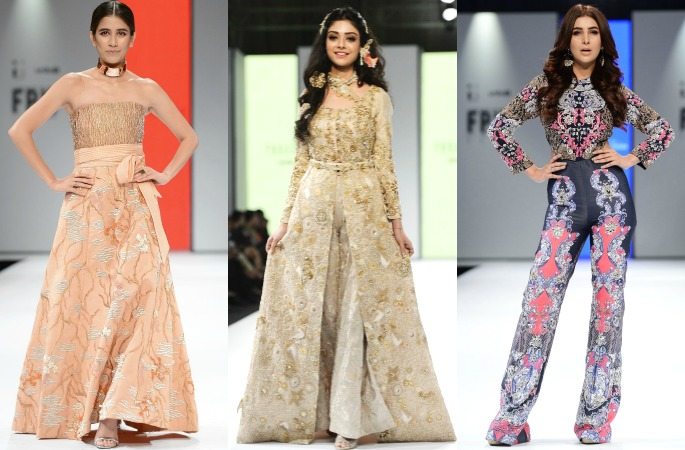 The opening saw Ayesha Farook Hashwani unveil striking patterns in her ‘Cruise Collection.’ Blue was a dominant feature in her segment, featuring capes, pants, and crop tops, in various prints.

Labelling their collection ‘Avian,’ FnkAsia stunned their audience with intricate handmade hair adornments. The show-stopping appearance by Actress Noor Khan was understated. She beautifully walked the ramp in a butterfly inspired look, consisting of floating hair pieces and motifs. And an equally beautiful gown in gold, with a belt at the waist. 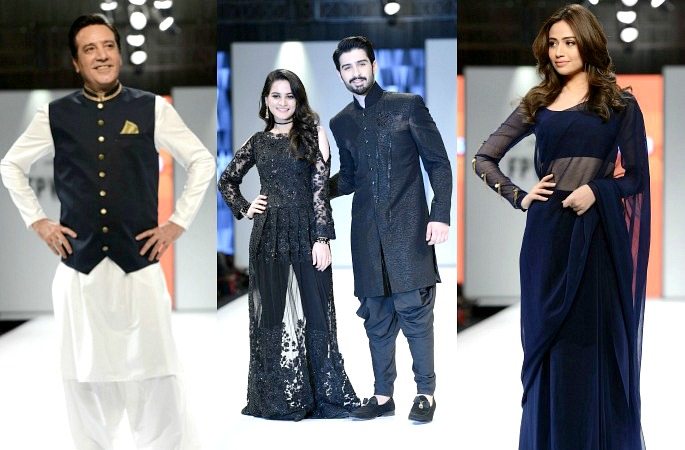 Sana Javed, who is a Cricketer and an Actress, emphasised clean lines and timelessness.

She sashayed down the runway in a plain chiffon blue Saree, with delicate gold details across its sheer sleeves. As such, this piece stood out because of its simple details.

But, at the same time, assured that the colour blue is certainly going to be a big player for next season’s colour palette!.

On the other hand, Javed Sheikh wore a crisp clear white Salwar Kameez, with a fitted black waistcoat, that had gold buttons and neck detailing. While Taimor looked rather dapper in his signature moustache. Wearing a long black Sherwani jacket, with a long slit in the centre, combined with cream trousers.

In addition, Nauman Afreen, with an all-black couture collection, gave us breathtaking glamorous pieces. As the showstoppers, actress Aiman Khan and her fiancé Muneeb Butt, showcased their pairing elegantly, in embellished and beaded ensembles. 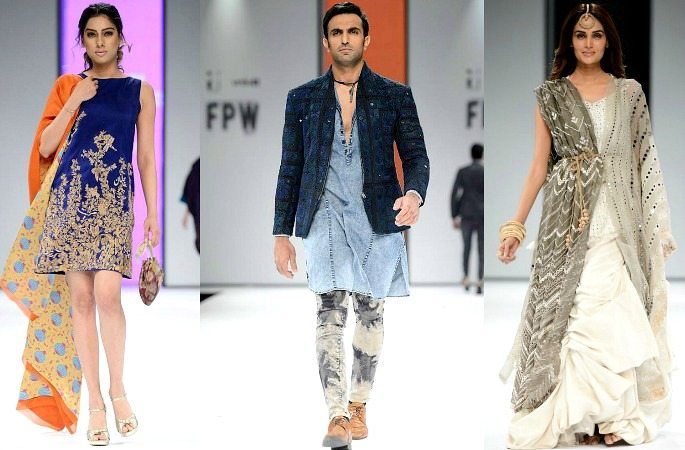 Speaking about her collection, Nida says:

“The ‘Khalarai Collection’ is based on organza and silk, traditional crafts hurmich, Sheesha tanka, Moti tanka and Heer Tanka.”

Next up was Inaaya, with distinct and elegant cuts in the ‘Baatin’ collection. Followed by the fashion DNA styles, which featured Munib Nawaz, with men’s tailored bomber jackets, worn over a denim shirt style Kameez.

Another standout collection was by Zuria Dor, focusing on dresses with flowy silhouettes, with a serene inspired colour palette. These calming tones were labelled as ‘Tropical Romanticism.’ 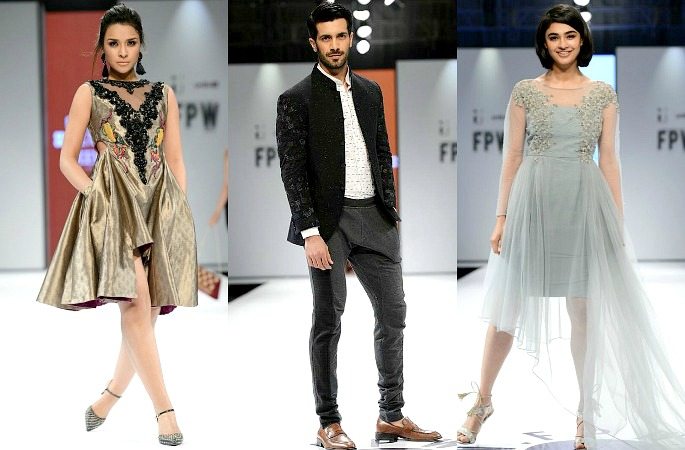 Leading to the vibrant ‘Jahan’ pieces by The Pink Tree Company, their collection showcased an array of attractive colours. In particular, a navy Kameez embellished with zardozi was combined with an orange Dupatta.

‘Song of my Nation,’  by Jeem, was a rather different approach of combining traditional techniques with chic styles. Notably, a gold mid-length retro dress was beautified with a black beaded neck design coming down to the waist.

Other designs of the day included Sonya Battla’s collection, with voluminous tunics and skirts, inspired by Sufism.

Amir Adnan and Deepak Perwani, showcased their exceptionally tailored menswear. Ranging from plain fabrics to a certain sense of purity, and the everyday formal clothing.

Lastly, some of the grand couturier’s segment included the likes of Nomi Ansari, HSY, and Sana Safinaz.

The majority of the Spring/Summer collection was purely pretty, yet, simple, with less bridal outfits.

But, it portrayed standout pieces and moments in rather colourful shades. We also witnessed many prominent black ensembles. Yet, when it comes to sparkle and bright colours, you can always count on the Pakistani fashion!

With Pakistani celebrities and designers, twinkling down the runway, Fashion Pakistan Week is an unmissable event of the year!