"It is very contemporary Indian - that's how I like it"

90 Celebrated designers from across the nation gathered to show off their stunning couture collections on the catwalk over the course of five fashion-filled days.

This year’s fashion extravaganza was truly a star-studded event with Bollywood beauties taking to the runway. 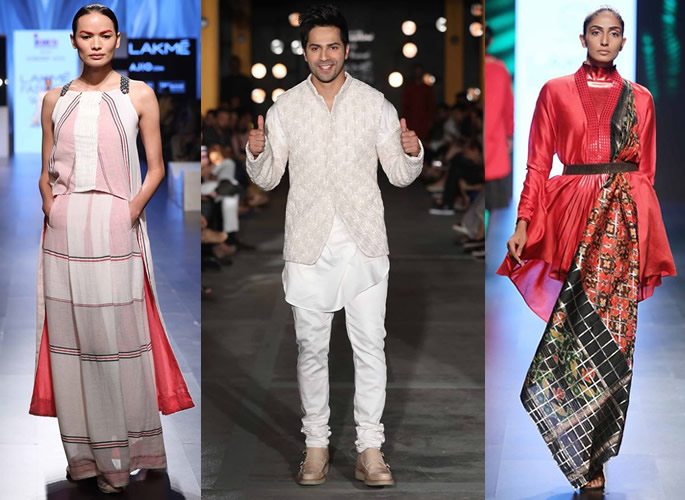 Opening Lakmé Fashion Week was Gen Next presented by INIFD. It saw a refreshing and innovative take on traditional Indian wear, experimenting with different types of silhouettes and layers.

The opening show also invited Lakmé’s first ever transgender model to the stage, namely Anjali Lama. The Nepali model stunned in a cream and coral ensemble: “I knew even as a child that I didn’t like being a boy, wearing those clothes,” she later told the press.

Rawal said: “Basically it’s a collection which is modern Indian. It is very contemporary Indian – that’s how I like it. I believe a lot in luxurious key pieces in a look and everything else can just sort of be a background for the look.”

The final collection of the day was presented by Amit Aggarwal. His ‘Am.It’ collection was inspired by technology and industrial materials. He played with metallic tones and shiny materials. There were cinched waists, multicoloured borders and full skirts.

Speaking about his show, Amit explained: “When we talk about being pro-environment, it’s not only about going organic. There are so many by-products of technology and industries that can be incorporated intelligently into your design.”

Proving to be a stark contrast to the pastel tones of previous designers, Aggarwal played with vibrant colours like teal, wine, mustard, olive and ink blue. 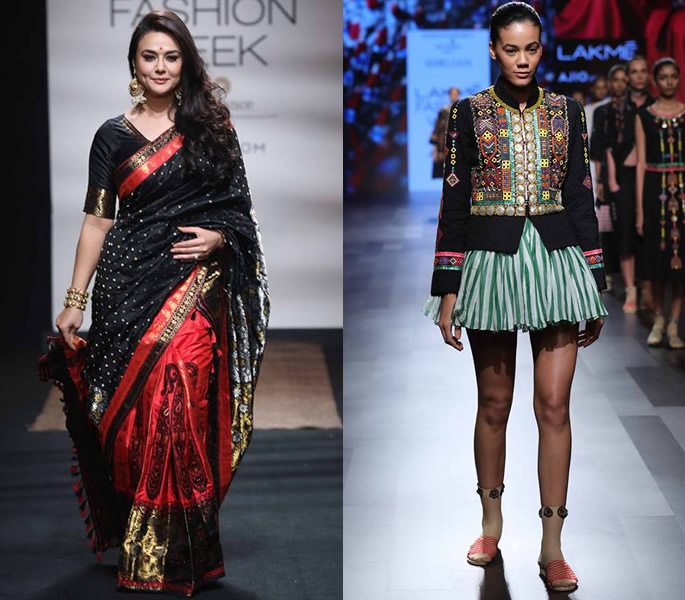 The Fashion Week also teamed up with Kranti, an NGO that empowers girls from the Red Light district of Mumbai, where many young women recalled their stories of abuse and victimisation. 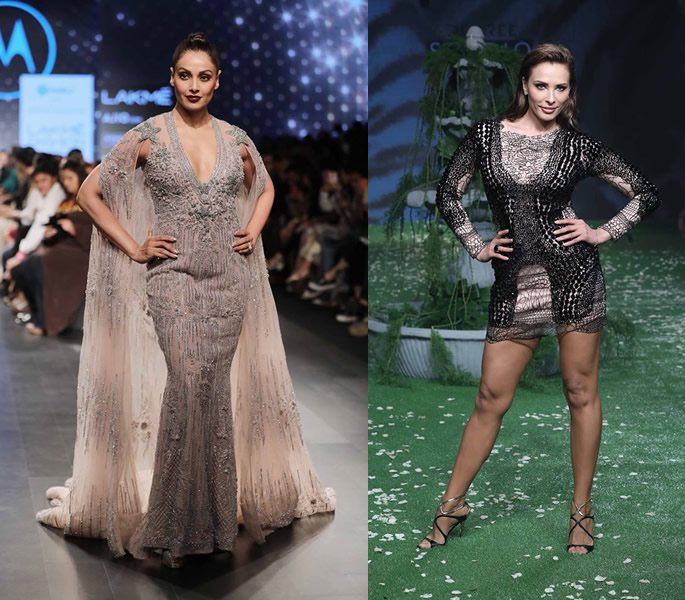 Vaani Kapoor walked for Ritu Kumar’s ‘Maharaja Pop’ collection which was a fun and quirky take on classic royal designs. Vaani stunned in a floor-length lehenga with blue red and gold floral motifs. She teamed the ensemble with a sheer blouse and black velvet jacket, also covered in floral.

Bipasha Basu stunned as the showstopper for Falguni and Shane Peacock in an elegant silver beaded gown with an attached mesh cape and silver embroidery. 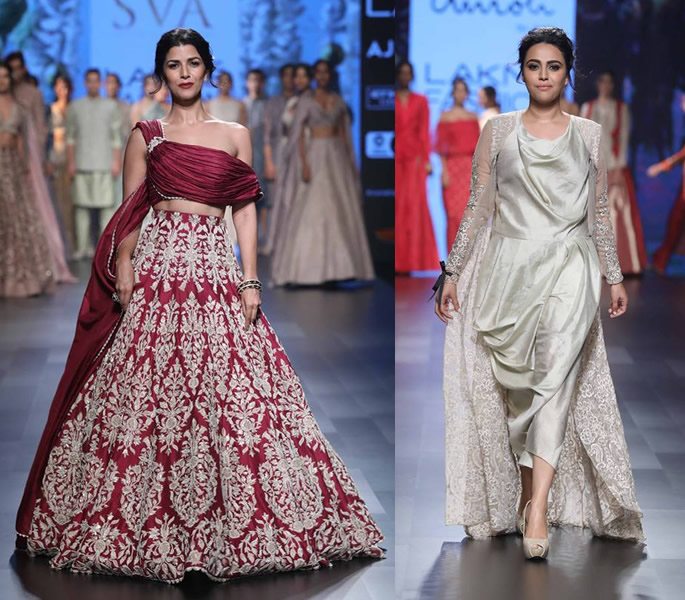 Arpita Mehta took a Middle-Eastern spin on her ‘Island Life’ collection which featured Karishma Kapoor. Kapoor stunned in a long pleated silk lehenga and a cream lace jacket with a gold textured blouse with hanging tassels.

Bollywood actress Nimrat Kaur was a breathtaking showstopper for Sonam and Paras Modi. Wearing a heavily embroidered wine red lehenga with golden motifs and embroidery, her choli draped across her bust, almost like a Grecian-style blouse. 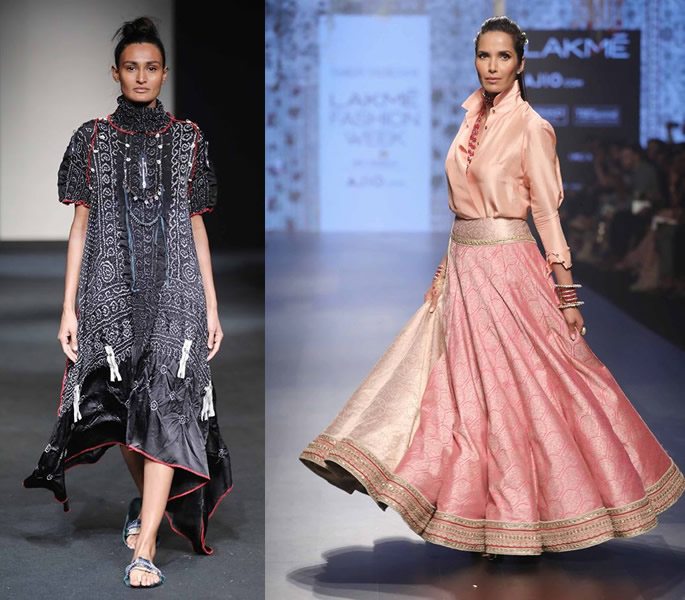 Goan label, Savio Jon presented an eclectic collection of two outfits in one. The designer, Savio Jon Fernandes layered different silhouettes of different decades into an array of unique ensembles.

Finally, Tarun Tahiliani took to the runway with pastel-coloured benarasi lehengas. These were paired with georgette shirts and chunky jewellery. Model Padma Lakshmi took to the stage in a salmon pink ensemble with golden borders and detailing. 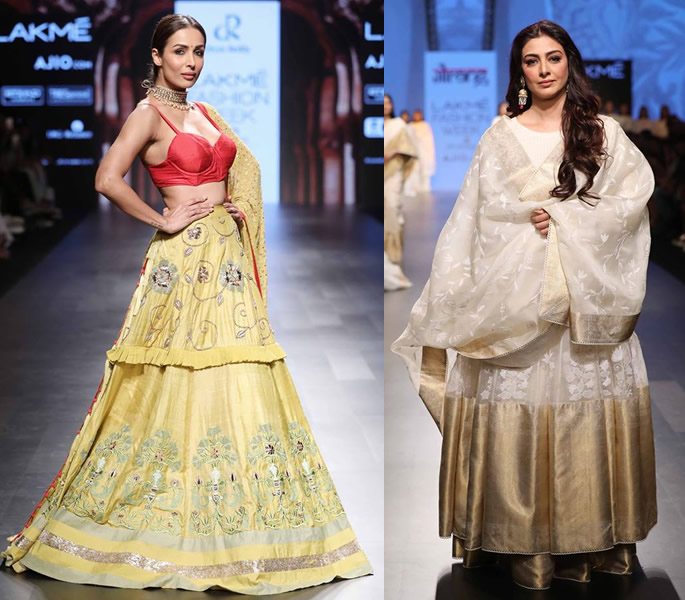 The final day of Lakmé welcomed the likes of Malaika Arora Khan, Tabu and Sushmita Sen take a stroll down the catwalk. Malaika walked for Divya Reddy in a chartreuse and red lehenga from the designer’s ‘Sahibzadi’ collection.

Gaurang Shah celebrated muslin in his textile collection with Parsi gara embroidery and chikankari. Tabu walked for the celebrity designer in an off-white and gold Indian ensemble.

Kareena Kapoor Khan returned to the limelight after giving birth to her newborn son Taimur Ali Khan at the end of 2016.

The actress and face of Lakmé Absolute glowed as the showstopper for Anita Dongre’s Grand Finale. The collection was inspired by Lakmé’s ‘Liquid Gold’ theme inspiring women to be independent and career-driven. 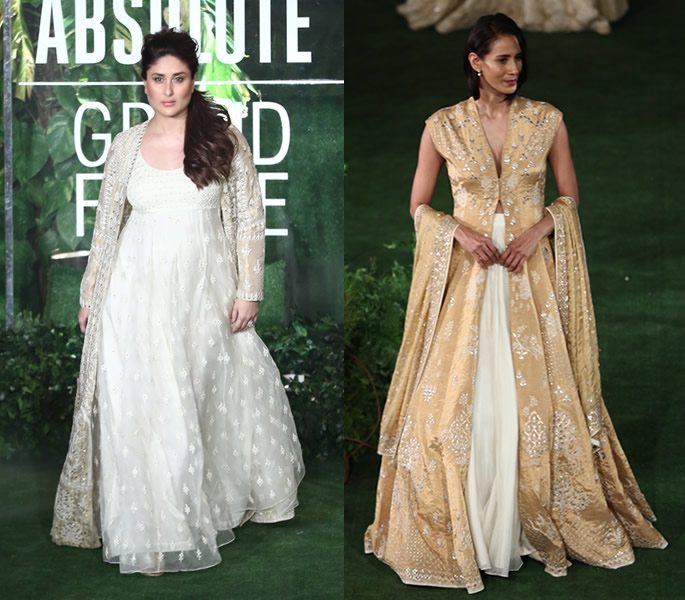 Lehenga cholis, sarees, tunics, sherwanis were the main elements of the collection, all displayed in soft hues of off-white, ivory and gold. Emphasis was made on the delicate embroidery, needlework and the designer’s signature gota patti work.

Before the show, Dongre said:

“Our collection is designed in keeping with Lakmé’s theme. There’ll be a glimpse of fluid silhouettes in glazed gold, reflecting the unique flora and fauna of a securely hidden oasis within the sun-kissed, glistening sands of Rajasthan.”

Kareena told IANS: “It feels amazing. It’s just been day 46 (post delivery) and it feels great. The idea is to do what I have been always loved to do, which is work. It is a part of my DNA, it’s a part of me. It’s never going to change.”

Lakmé Fashion Week continues to lead the way in South Asia with its jaw-dropping fashion statements and Summer/Resort 2017 was no exception. With Bollywood showstoppers and celebrity designers, Lakmé is the unmissable fashion event of the year.