Lakmé Fashoin Week Summer Resort for 2012 took place during March 2nd–6th 2012 in Mumbai, India. The high prestige fashion event of Inda featured some of the latest designs and famous designers India and Asia. We look at highlights from this incredible fashion extravaganza.

Lakmé Fashion Week (LFW) – Summer Resort 2012, a five day extravaganza of fashion at its highest level took place in India, Mumbai between March 2nd–6th 2012. LFW showcased some of the biggest designers in India, Purvi Doshi, James Ferriera, Gen Next, Sailex, Masaba, Shivan & Narresh (the only designers in India making swimwear and resort wear) and Rohit Bal, to name but a few.

Like any major fashion show, LFW had the top super models of India showcasing amazing designs. Super models such as Gabriela Bertante, Kanishta Dhankar, and Rikee Chatterjee added to the prestige and glamour of this phenomenal event. 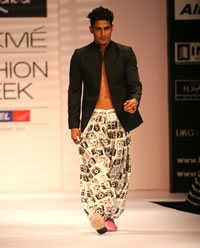 Bollywood sisters Maliaka and Amrita Arora walked the ramp in a stunning black colour velvet full sleeve blouse with embroidered ghagra. Malika’s sister Amrita wore a cream lehenga. Both looked stunning and made a statement in these elegant designs.

With wedding season beginning, Payal Singh’s collection will be a hit as these gowns keep with tradition with a very slight modern twist. Payal’s wedding collection stunned the audience. Tanisha, Bollywood actress Kajol’s younger sister, wore black tulle lehenga. The detail of the embroidery married with gold and a long sleeved choli and stunning dupatta was show stopping. Tanisha showed her catwalk skills and looking beautiful like a new blushing bride. Kajol sitting at the front with pride, supported and cheered her sister on. 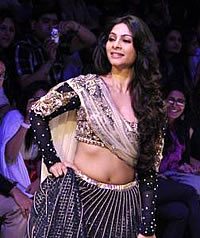 “I was comfortable wearing a sari as I had worn it in my first Hindi film. I felt like a princess. I feel saris make you look sexy and sensuous.” 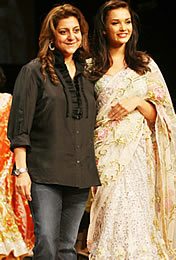 A common thread of Indian clothing by these talented designers was elegance and simplicity to show off the beautiful Indian female figure in its full glory. Each model projected the designs and collections with tremendous ease and finesse, and each look showed amazing confidence embraced with beauty unlike what you would see in Asian events in UK.

Bibhu, Siddhartha Tytler, Rimi Nayak — with Sucheta Sharma, Khem by Khushboo & Prem again to name but a few; showed off their couture dresses. Designs which would not be surprising to be seen on any red carpet event like the Oscars or BAFTA’s. These are creative designs which are not inspired by other couture brands. Some designers may have a touch of the odd Versace or Alexander McQueen but LFW showcased original works of art by very talented Indian designers.

Another beautiful Bollywood actress to walk the ramp was Dia Mirza, wearing Khushali Kumar’s collection. Khushali Kumar, the daughter of the late Gulshan Kumar, owner of T-Series, presented a collection inspired by fairy tales and titled quite aptly as, Angels and Princesses. Each model adorned the runway with elegant and colourful gowns. The attention to detail on the beading on the bodice and work on these gowns would make any girl or woman feel like a princess and float with elegance as a fairy. 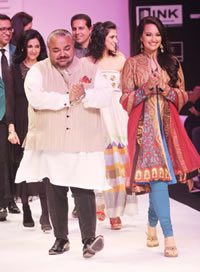 Sonakshi Sinha the ‘Debangg’ girl was a show stunner and walked the ramp for JJ Valaya. She wore a beautiful cream and blue paneled anarkali dress with netted design. Sonakshi said, “It was fantastic walking for Karmik. I am glad to be associated with Karmik. It is very affordable and all the girls who have dreamt of wearing designer wear now can buy it in an affordable rate.”

The grand finale of Lakmé was by no other than Rohit Bal. All the big names of Bollywood sat with anticipation of this great designer’s collection. But it was not just a showcase of a collection of amazing designs; this was a breath-taking show enticing the senses of sight and sound, bringing a beautiful dream to life.

A live classical orchestra was playing behind the ramp. The sounds of classical music such as Vivaldi echoing through the venue. Each model walking the ramp worked with the orchestra and to its beat of the music. Such precision is very rarely seen at such fashion shows.

The back drop gave the atmosphere of ancient Greece with the magnificent pillars and ivory flowing backdrop. Five models stood in the middle of the ramp in single file covered in which appeared to be a huge ivory veil which gently rose to the top.

This amazing collection ‘Kaarigari’ by Rohit Bal was a blend of Asian and Western outfits for both men and women. The outfits for women were floor hugging and graceful, the men airy and comfortable with the hint of sharp style. 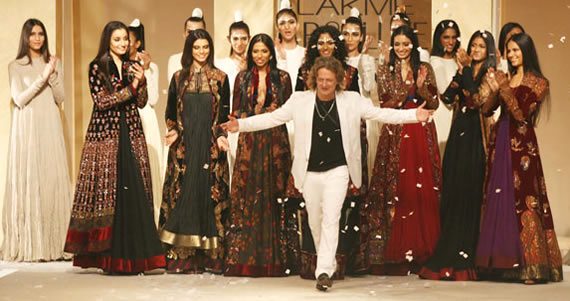 The collection started with the beautiful ivory couture dresses. The models looked as if they descended as Greek goddesses from the heavens. The next was an extreme contrast of dark colours. Beige and brown, maroon, wine, cobalt, red, purple. The balance of crystal, resham and zari embroidery on these outfits were perfect as the production of the grand finale.

There were no celebrities walking the ramp, unlike last year when Kareena Kapoor walked the ramp for Manish Malhotra (LFW 2011 Grand Finale). Rohit Bal wanted the attention on his production and collection, not a celebrity. This was evident from the response after the show. A standing ovation by the major players of Bollywood, this included Arjun Rampal, his wife Meher.

Rohit Bal was over whelmed from the standing ovation received and said: “This is an emotional moment for me as my work has been appreciated by all…and that I have not let anyone down. When you get a standing ovation from the audience I don’t think there is anything better than this.”

Arjun Rampal commented, “I must say this is Rohit’s best-ever collection and finale to date.”

This was a show that will break barriers between Western and Indian Couture houses. The outfits this season for LFW Summer Resort 2012 were exquisite in every form and the world is beginning to notice that India is not just rich in its history, culture, films but fashion also.

There is no doubt that fashion, designs and creativity that is pouring out of India will one day be featured as main couture brands in fashion weeks around the world.

Savita Kaye is a professional and hardworking independent woman. She thrives in the corporate world, aswell as the glitz and glam of the fashion industry. Always maintaining an enigma around her. Her motto is 'If you got it show it, if you like it buy it'!!!
Asian Designers impacting Fashion
Spotlight Fashion Models Launch