The Great British Bake-Off 2016 contestant Rav Bansal reveals he has been subjected to racist abuse and called the p*ki word.

'are you the p*ki on the not so British bake off?'

Rav Bansal, a contestant on the Great British Bake Off 2016, revealed on Twitter that he got racist abuse whilst on a street on Friday 2 September.

Bansal, of a Punjabi Sikh background, lives in Erith in Kent with his parents. He works at City University.

Bansal has appeared on the two episodes of the baking BBC television show, which has received record ratings this year. The opening episode accumulated 13.6 million views.

After his first appearance on the show, he went public about abuse he received by a British person and tweeted: “So today I was asked ‘are you the p*ki on the not so British bake off?’ Really, in 2016?”

Condemnation came from his fellow contestants came immediately when they saw Rav’s Tweet.

Selasi Gbormittah wrote in response: “What is happening?” 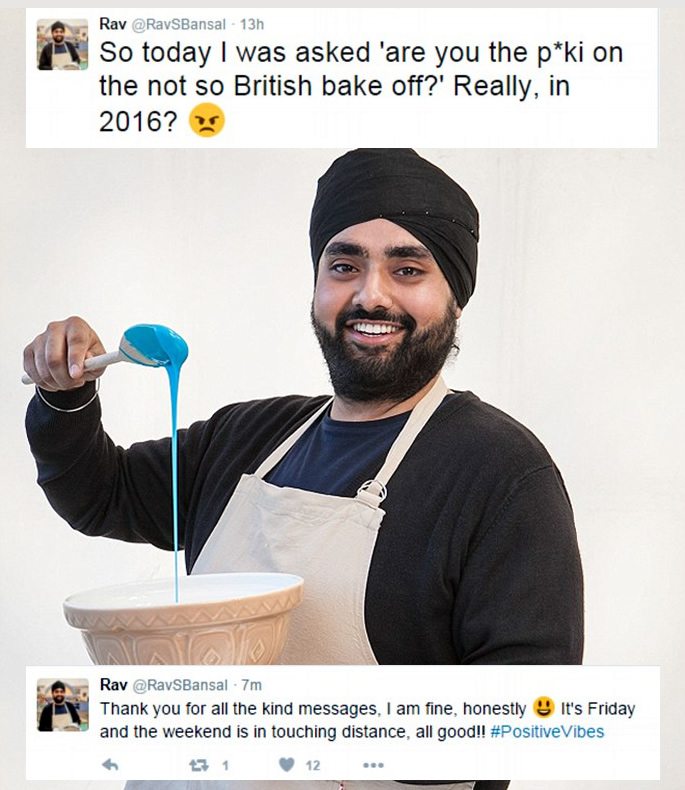 Other responses from the public included:

RohanSinghKalsi who told Rav to ‘forget the ignorant fools’ and ‘Wear that crown loud and proud King,’ referring to his turban as a Sikh.

TheLittlePK who was not happy at the abuse Rav got and said: ‘People are so ignorant. I’m cross on your behalf.’

‘Awful for you but remember that the majority of us are as horrified as you. We think you’re fab!’

Bansal responded to the amazing support he received from everyone and tweeted:

‘Thank you for all the kind messages, I am fine, honestly.
‘It’s Friday and the weekend is in touching distance, all good!! #positivevibes.’

Bansal is getting known on the show for his sense of humour and is of the 10 remaining contestants on the Bake-Off show.

Winner of last year’s Bake Off show, Nadiya Hussein, was also subjected to racist abuse and for being a Muslim in the UK. Talking about it, she said that she expected it.

“I’ve had things thrown at me and been pushed and jabbed. It sounds really silly because I feel that it’s just become a part of my life now.

“I expect it. I absolutely expect to be shoved or pushed or verbally abused because it happens. It’s been happening for years.”

Highlighting how racism is still rife in Britain, especially, when ethnic people like Nadiya and Rav are seen on very ‘British’ programmes like Bake-Off. Making it even more important that television programmes like this must continue to reflect the real diverse cultures of the UK today.