The Great British Bake Off returns with 12 brand new contestants eager to show off their amateur baking skills. Find out what happens in episode 1 – Cake Week!

"This is the stage where it could all go wrong"

The magical white tent that is an Aladdin’s cave of sweet and indulgent treats has returned to our TV screens for series seven of The Great British Bake Off.

12 brand new baking amateurs will battle it out to be crowned the Bake Off winner, a coveted title that Nadiya Hussain won in 2015.

The show which is hosted by Sue Perkins and Mel Giedroyc saw its first episode of 2016 watched by an eager audience of 11.2 million.

Each week contestants are judged on three baking tasks, The Signature Challenge, The Technical Challenge and The Showstopper.

Judge and national treasure, Mary Berry, is joined by the enigmatic baker Paul Hollywood to narrow down Britain’s best amateur baker. Paul professes a desire to go ‘back to the basics’ of baking and admits that this year contestants will be marked on how well they can create classic bakes as opposed to unknown ones.

Each week will also see one contestant crowned as Star Baker and one baker who will leave the tent and the competition for good.

For 2016, among the multicultural line of contestants is British Asian Rav, a support worker who hails from Kent. His opening statement:

“When an athlete enters a race, they don’t hope to finish third or fourth, they want to be the winner.”

Rav is hoping to dazzle judges Mary Berry and Paul Hollywood with his unusual flavour combinations inspired by his love of global cuisine. 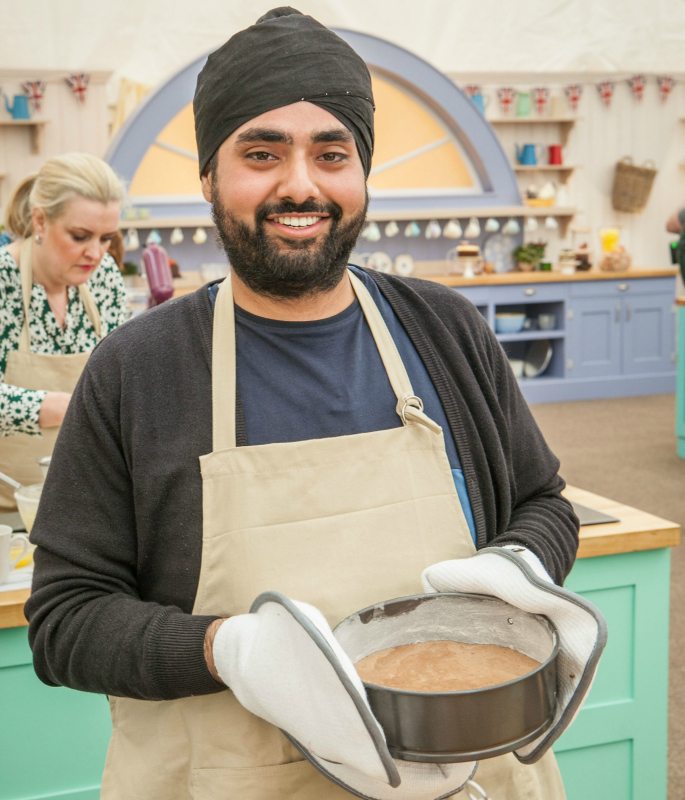 For Cake Week, the first Signature Challenge of 2016 is a Drizzle Cake. Bake Off’s innuendos get off to a flying start as Mel insists on the need for ‘moistness’ in the cake.

Rav decides to impress the judges with a Ginger Spiced Yuzu Drizzle Cake topped with Crystallised Stem Ginger. This is a unique take on the classic lemon drizzle.

Most of the tent are unsure of what a yuzu is supposed to be, however, which is a big surprise to Rav, who explains that it is a Japanese fruit, and can be described as a cross between a lemon and a lime.

While Rav seems to be confident about his drizzle cake, he manages to score the first casualty of the competition after cutting himself:

“I did have a moment where I panicked and I cut myself within 30 seconds of starting. Still Zen, we’ll see how long that lasts!”

The drizzle cake, while an interesting concept leaves much to be desired for Mary and Paul.

Mary tells him: “Your spices are not coming through in the cake,” while Paul adds that he is finding it hard to pick up on any citrus elements at all and is confused by the yuzu.

He ends his comment by telling Rav: “Watch your flavours.”

Standout drizzle cakes from this round include Benjamina’s Pistachio & Lemon Drizzle Cake, for which Paul compliments her on the great flavour and texture.

Mary also loves Candice’s Rasberry and Rhubarb Drizzle Custard Bundt Cake, but Paul comments that it is too much like a pudding.

Selasi impresses, however, with his Citrus and Spice Drizzle Cake, and even manages to secure a smile from Paul: “The flavours are fantastic,” he tells him.

The contestants are given the same ingredients and a very vague recipe which they must decipher. 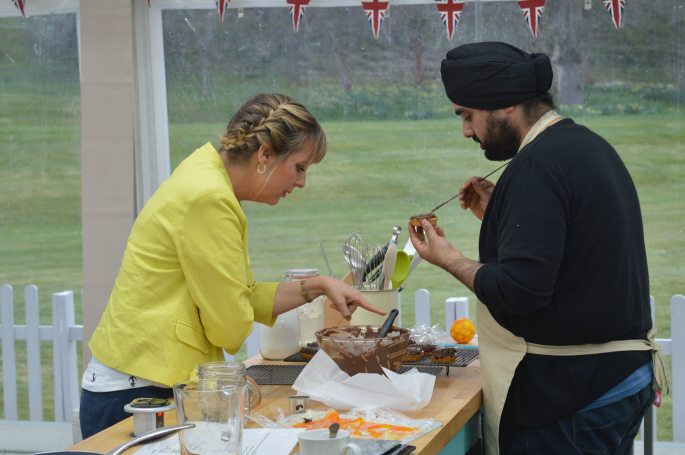 All the contestants are finding it a bit of a challenge, with many of them trying to remember what a jaffa cake looks like. Selasi however, sails through and seems to be unperturbed by the challenge. He comes first.

Rav struggles and ranks in the bottom half of the scoreboard, in eighth place. Mary comments on how the sponge has risen more on one side than the other, while Paul suggests that the chocolate is too thickly spread.

For their final task of the weekend, the contestants are asked to create a Showstopper – namely a Mirror Glaze Cake using a Genoise Sponge. An extremely light sponge that can go wrong quickly. At least four of the contestants are forced to redo their sponges after they become too rubber-like in texture.

Rav opts for a Columbium Mocha Mirror Glaze Cake. While adding the flour, he says: “This is the stage where it could all go wrong. You just have to be careful.”

He’s afraid of his measurements, however, and whether the coffee will overpower the chocolate. The end result looks good though and Mary says that he has a ‘smashing shine’ on his glaze. Sadly the genoise itself is too dry. Paul says:

“Your flavours are spot on but your texture is all wrong.”

After an intense two days of baking, Paul and Mary know have to decide who will be leaving this week.

Sadly, it’s Lee who fails to make it to the next round, while Star Baker is given to Jane who has had a fantastic week in the tent.

Rav has managed to get through Cake Week, but he still hasn’t shown us or the judges what he can really do. How will he fare in Biscuit Week?