The House of iKons September 2018 fashion event showcased phenomenal talent. Designers of all ages and background unveiled their collections.

"There is something fascinating about the way a body moves. You can never replace it."

The House of iKons fashion event was nothing short of wonderful, showcasing an array of up and coming designers.

The event now a staple in numerous cities is fast becoming a must see at fashion weeks around the world.

The House of iKons has gone to places like LA, Beijing, Abu Dhabi, Dubai and Budapest. It is set to expand further in coming years.

The premier fashion event took place at the Millenium Gloucester Hotel on Saturday, September 15, 2018, as part of London Fashion Week.

DESIblitz, as a proud media partner, attended to witness this extravaganza of fashion.

Founder Savita Kaye and Franco Mabanta were the two hosts for this glamorous event.

There were many stars in attendance. These include Top 3 chart singer David Jordan, Invictus Games star Wayne Harris alongside fashion’s elite. 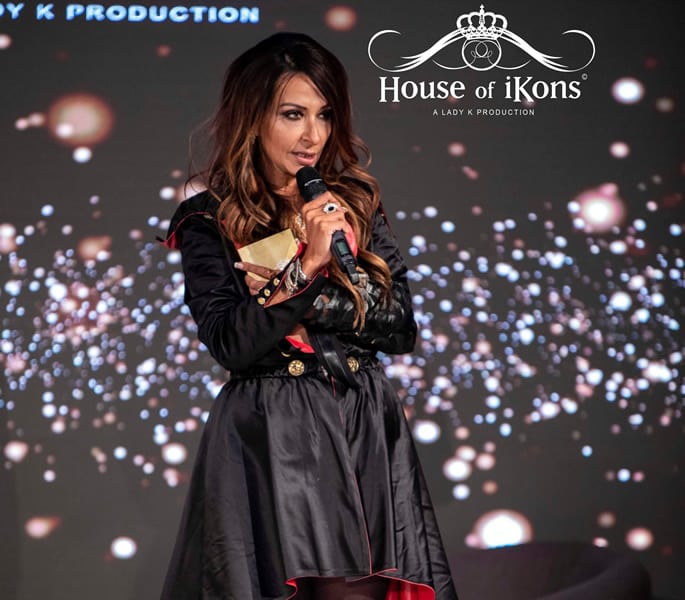 The event gave many designers a chance to unveil their collections on the catwalk.

To realise the uniqueness of this event, we highlight the different segments of this incredible cake of fashion:

The Sky is The Limit

Kicking off the first segment of the House of iKons show was Canadian designer Antonio Chavez. 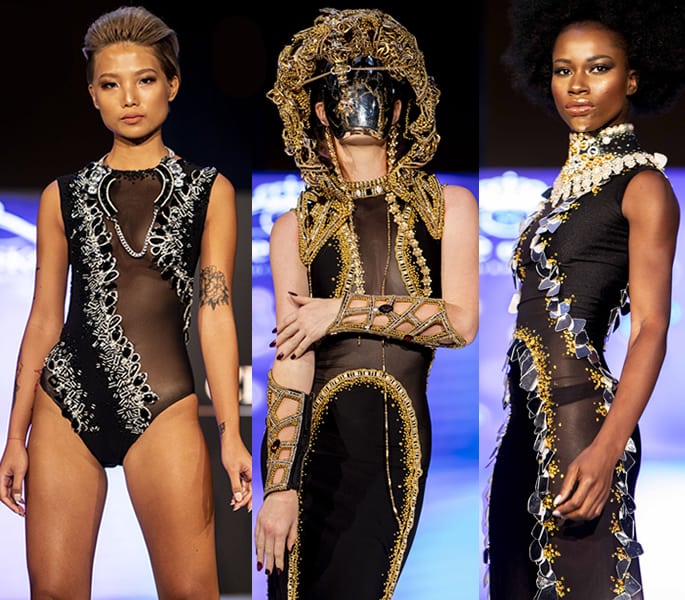 Taking influence from the galaxy, his figure-hugging black outfits were bedazzling with ornate crystals. Finishing with statement shoulder pads and feathers, the collection was fit for any diva or queen.

Gone But Not Forgotten

In complete contrast, Dimple and Amrin’s collection was dedicating late Bollywood star, Sridevi who sadly past away on 24 February 2018. 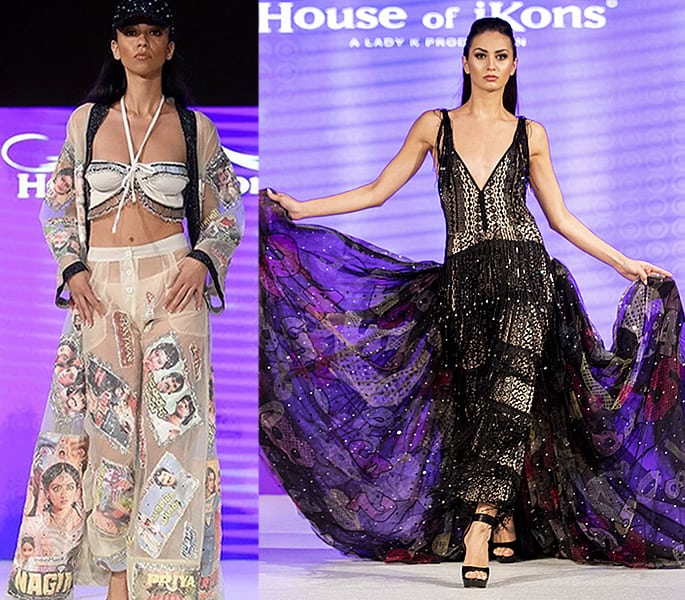 All her pieces were showing pictures of Sridevi woven into the long evening gowns and flowing garments. The collection was a tribute to the award-winning life and work of the popular actress, spanning four decades.

Moving music was playing in the background, creating a beautiful atmosphere in the room.

Segment one also featured a number of other designers from around the globe such as Balaz Ester, a designer from Budapest. 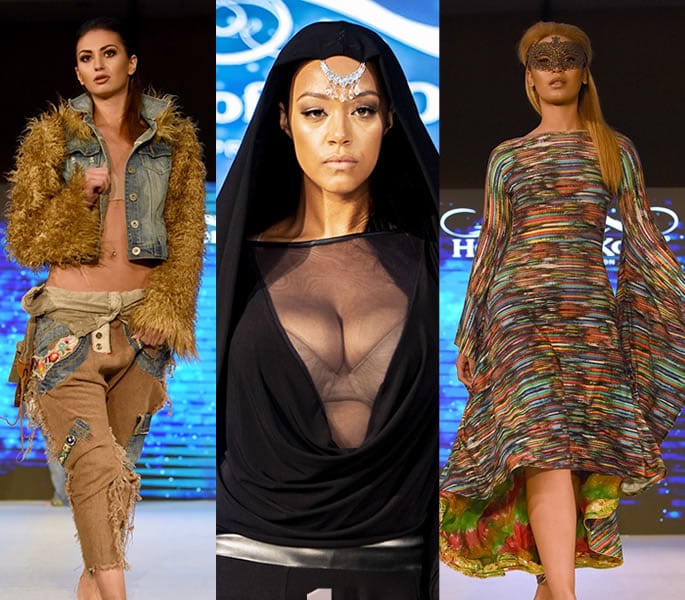 The Hungarian influence was very apparent in some of the long flowing designs which incorporated varying patterns. The shorter designs were much edgier and risky mixing sheer fabrics exposing the chest of the models and bold colours. The collection had an item suitable for everyone.

Streetwear with a twist was the theme of all of designer Edele’s gender neutral pieces. 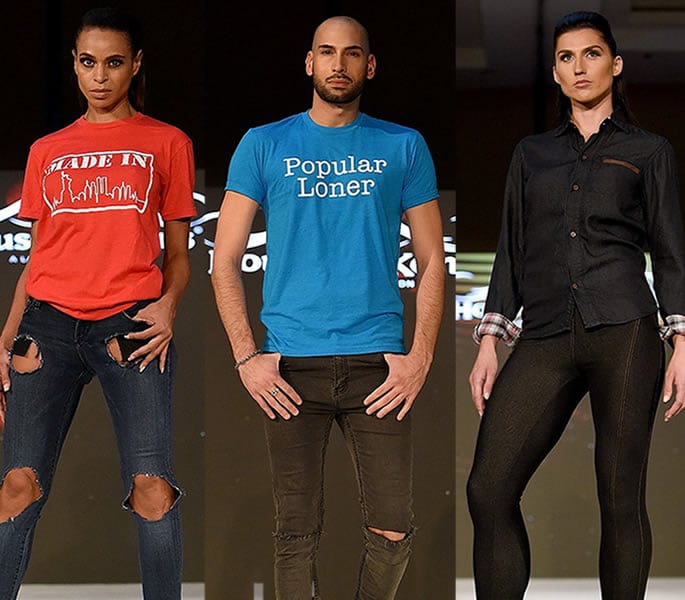 The showcasing of basic t-shirts with the words ‘popular loner’ on them, tailored denim shirts as well as stylish jeans, definitely made the collection very wearable. The designer steered away from the use of colour, bar a pair of red denim jeans worn by a male model.

The Sabas Creation’s show displayed a range of loose-fitting evening wear which is perfect for the modest fashionista or the older lady who doesn’t want to flaunt too much flesh. 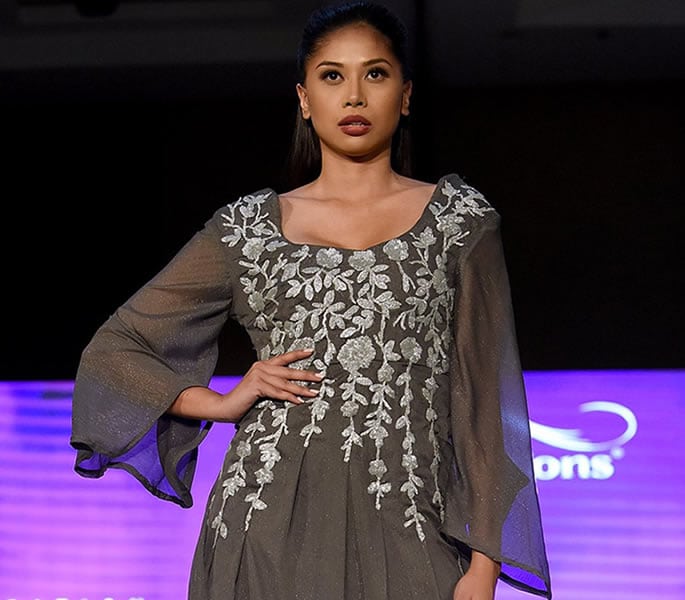 A South Asian influence was very visible in all designs which featured floor-length gowns with delicate floral embroidery and black lace.

Bjorne of Norway used photographs of stunning Nordic landscapes and animals, such as Wolves, printed on flowing materials. 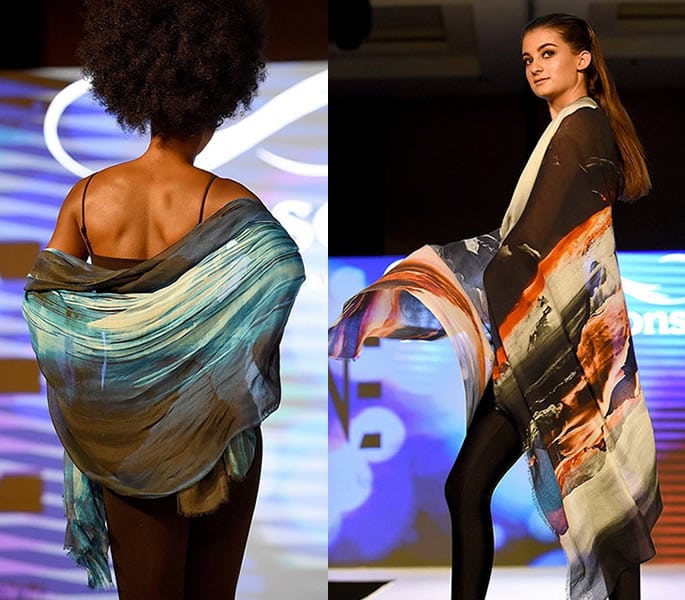 The prints were which were used as shawls emphasised by models wearing black bodysuits in some cases, as well as being sewn into pieces. The cold harshness of the Nordic landscape was emphasised with slicked back hair and dramatic music.

From the Land of The Rising Sun 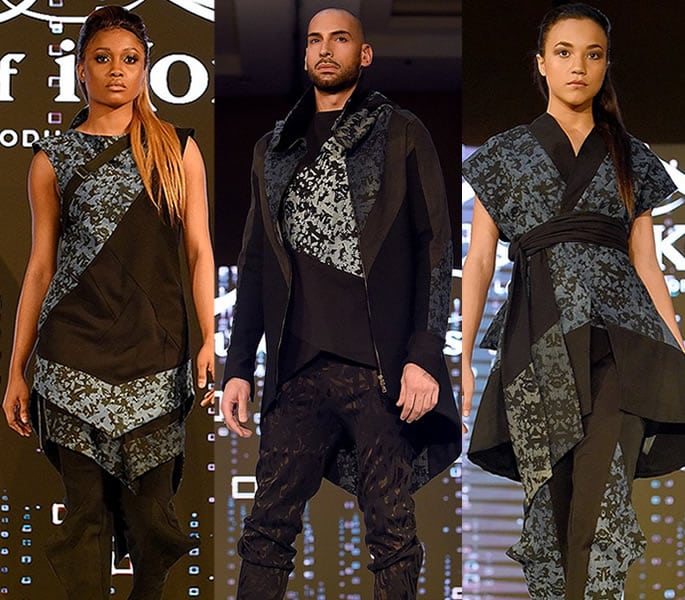 The collection made use of layering of the harsh, asymmetrical cuts, which were softened by blue flower printed material which was reminiscent of traditional patterns from the Far East.

One Off by Tatiana Pintilli showcased a range of evening wear in a range of bright colours. 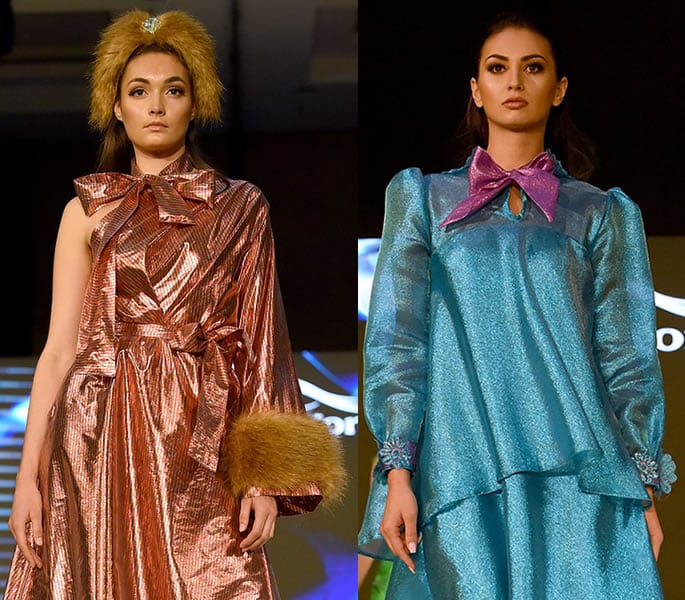 Complete with large bows synonymous with the 80’s, the long gowns were made from numerous metres of shiny material in every colour of the rainbow. The gowns were pinched in at the waste providing shape to the pieces.

Sima Brew is a huge designer in Ghana and her show-stopping, vibrant pieces did not disappoint. 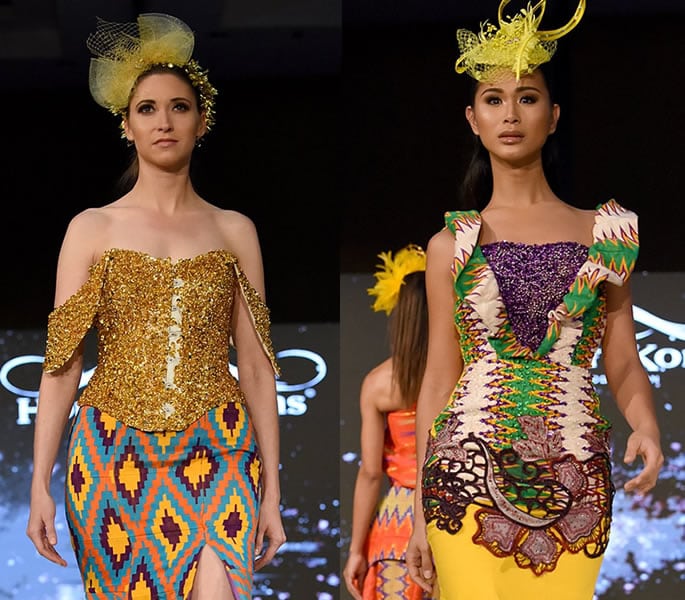 A mix of traditional, exciting African prints complete with their numerous, bold colours were common amongst the pieces. The cuts were faltering to all body types and the designs and were finished with beautiful accessories fit for any queen.

Closing the segment with her powerful and superb vocals was 16-year-old Lydia Singer. 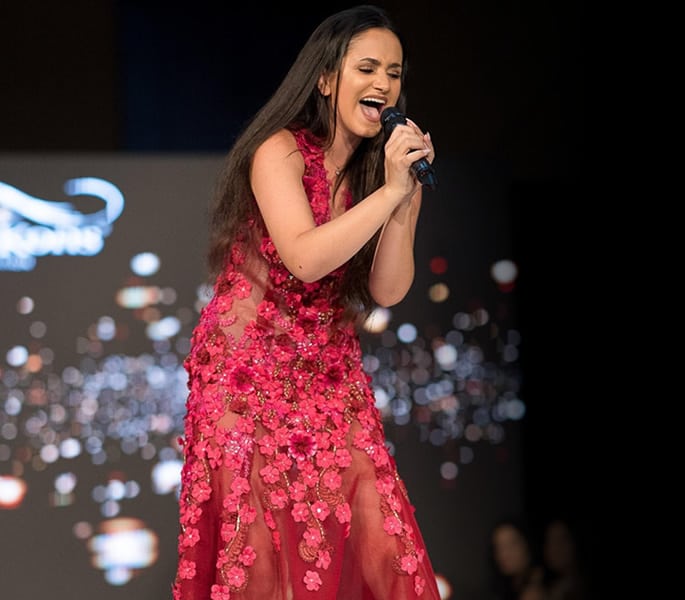 She caught up with DESIblitz to speak of her experience:

“I love it as always, I feel like I have grown up with House of iKons and everyone is so lovely. It is like a family. My favourite designer was Sigrum. I love her designs and I’ve worn several of her pieces as well as had them in my music videos.”

The King of Unmatchable Leather Luxury 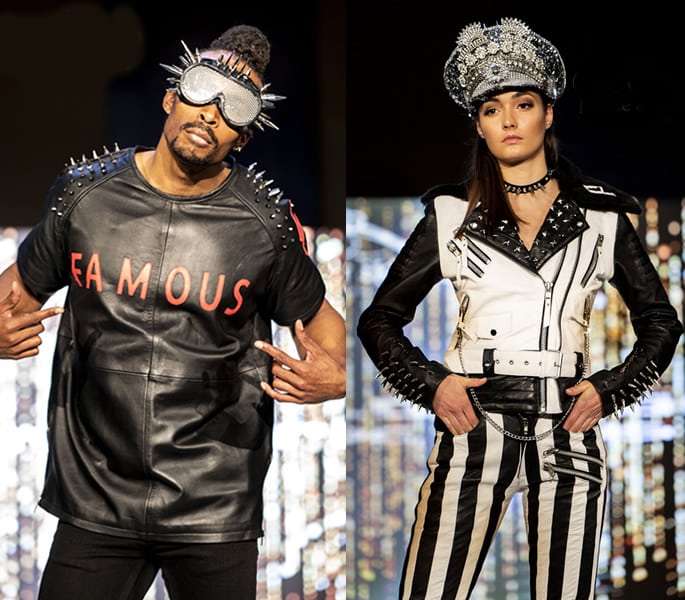 Lombard is a famous brand of high-end men’s and women’s leather garments.

Using only aluminium, the designs are bold with simple and harsh shapes. The look with helmet-like headgear gave the entire collection a futuristic element. 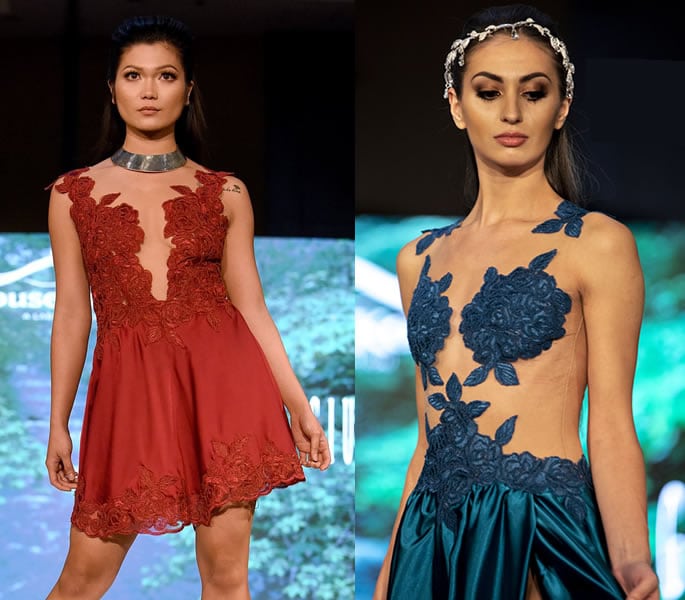 The pieces were simple but well cut, form-fitting dresses and jumpsuits, all with beautiful and intricate embroidered flowers. The use of sheer material and soft fabrics added to the feminine charm of the show. 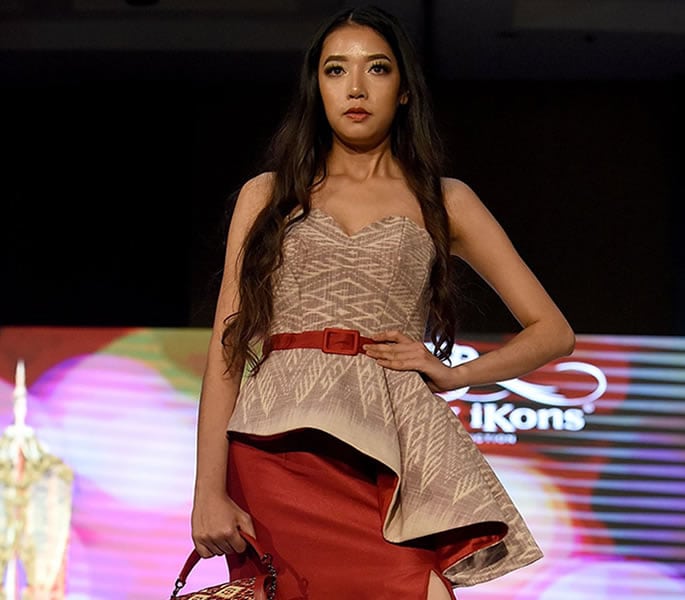 Taking influence from Thai culture, some of the elegant evening attire was given a shakeup with the addition of vertical stripes of colour, whilst other pieces remained very traditional. From figure-hugging evening dresses with blacklist stripes to cream lace wedding-like gowns the collection catered for every occasion. 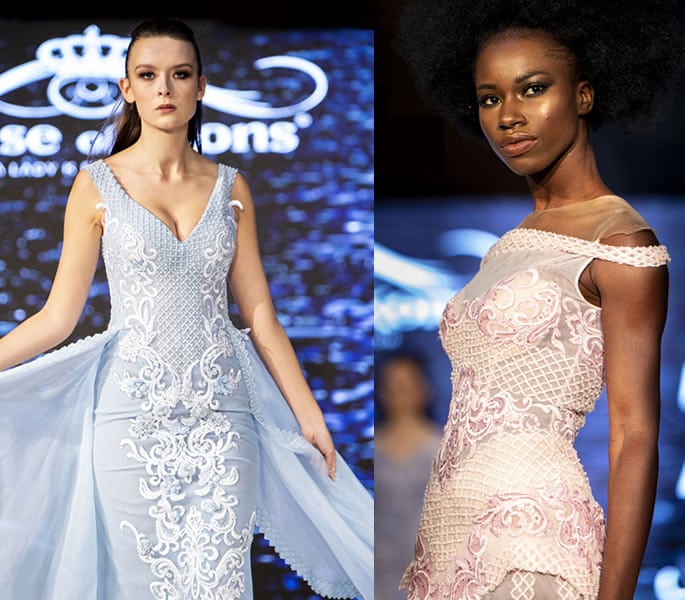 The stunning, floor-length evening gowns emphasised feminine curves. The range of metallics and neutral tones, mixed sheer material and flattering cuts to make for a collection which wowed onlookers. The designer highlighted feminine elegance and beauty with his designs. 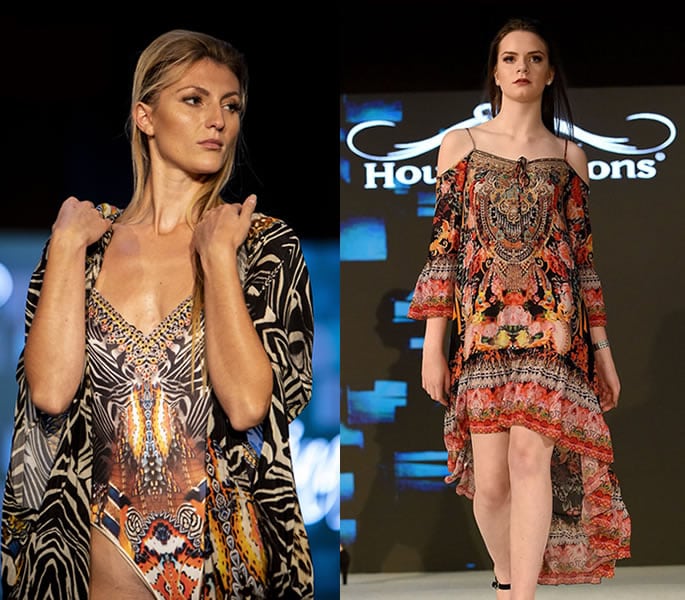 The outfits were perfect for the beach or casual wear in hotter climates. Whether it be swimsuits with ornate eye-catching but revealing cover-ups with hoods, kaftans with stunning middle eastern, tribal-influenced prints or colourful supports wear, this wearable collection has a piece for every lady of all ages and all sizes.

The Universe and Beyond

Stephane Koerwyn ‘s influence of the universe was apparent throughout the collection which showcased to a backdrop of a galaxy. 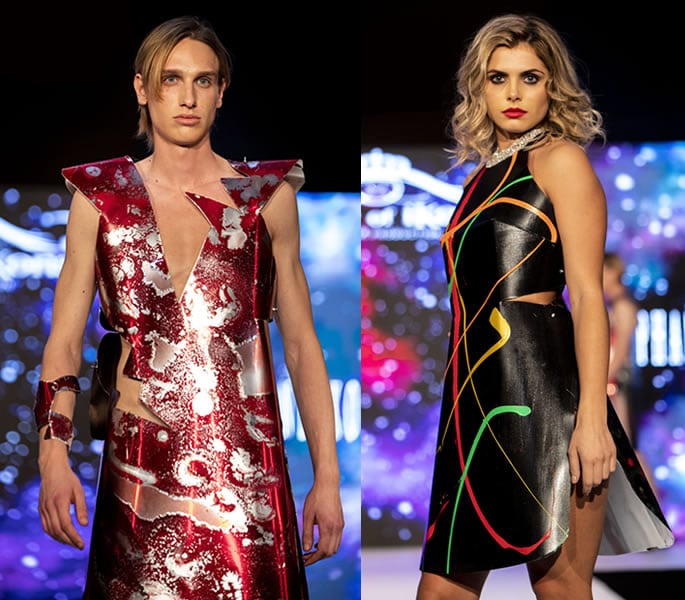 He used metals printed with cosmic-like patterns and feathers in his strong modern designs. His designs included asymmetrical, A-line cuts and protruding shoulder pads which are perfect for any intergalactic traveller.

Ethical designer Sigrun from Iceland took the audience back in time with her Viking inspiring collection. 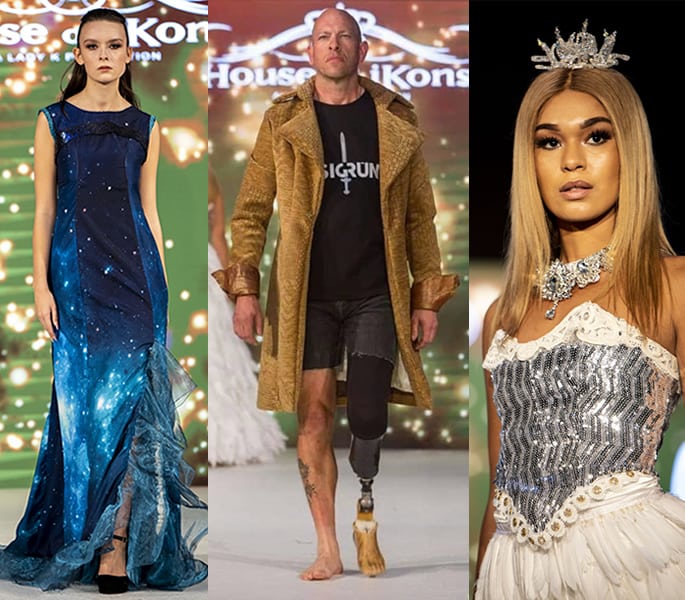 The 48-year-old designer exclusively told DESIblitz: “I grew up in Iceland where we would hear tales of Viking sagas and mythology. I love the idea of strong women and love nature. The colours are divine, everything from the sky to the sea.

“I try to find materials that are as organic as possible. I use a lot of fish leather which is very sustainable, otherwise, it would have been thrown back in the ocean from the fishing industry.”

The Sigrun show was very thought-provoking, with its use of materials. Wayne Harris, Invictus Games Silver medalist got to feature as part of this show.

The designer spoke of her choice of model: “I used the song wounded warriors, wanting to feature Wayne who’d lost his leg by having a tank run over it.

“I get very upset by how our veterans get treated by society. We are fearful of their mental health. They are seen as a defect and people don’t want to recruit them. It’s just not ok.”

A Young Boy with An Old Soul

Designs by Josh was an elegant and a mature collection of evening wear, representing sophistication. 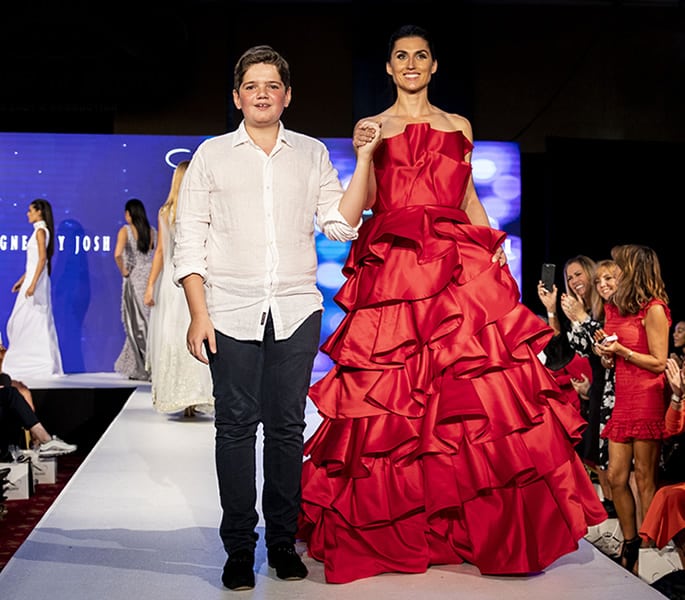 His designs prove that age is only a number. Simple lines and delicate, flattering, soft sumptuous fabrics were emphasising the curves of the female models.

Closing the second segment was the very exciting, brilliant and fashionable David Jordan. 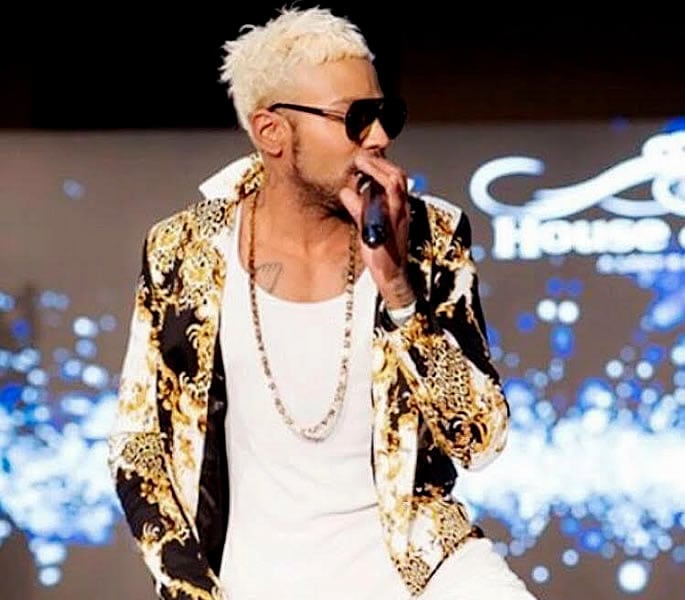 The fashion-conscious star got the crowd buzzing with his No 3 chart hit. Speaking on the occasion he mentions:

“Love Chavez, such an amazing designer. I like the show and am so happy to be a part of this amazing event.

“The House of iKons is doing great things for up and coming designers. It’s an honour to perform.”

The House of Honee 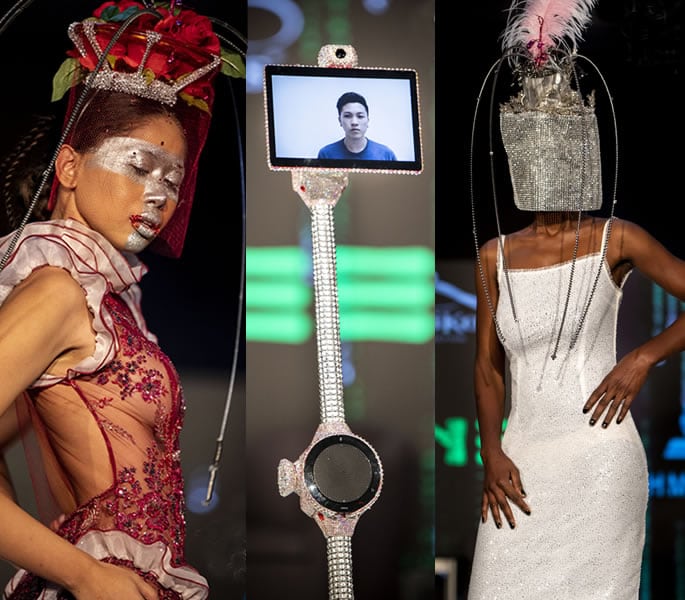 The Future is Here

The solo show AI was the third segment of the event, presenting The House of Honee. The designer from LA did create a landmark moment with the introduction of artificial intelligence to the catwalk.

In association with Ohmnilabs, the impressive robot hit the runway for the first time. Human models do not have to worry about losing any jobs quite yet. This is because the robot was simply a moving screen on wheels. But the addition made for a fun talking point amongst the audience.

The designer says: “There is something fascinating about the way a body moves. You can never replace it.”

This fantastic fashion event gave a platform to 18 super designers on the Saturday event from all over the globe to showcase their collections.

Styles and ideas were dramatically varying, providing excellent entertainment and interesting viewing for all those who came. The individual shows were very creative.

The audience was taken on an emotional journey of highs and low. The event took place in conjunction with the Sharan Project, raising awareness for domestic violence.

The show has shown the growth in this diverse fashion event organised by Savita Kaye over the years.

Keep an eye out for the next House of iKons event in February 2019.

Anusha Nava is singer, songwriter, actor and presenter with a passion for spreading positivity, love and connecting with people. Anusha lives by one motto ‘The difference between dreams and reality is called action.’