Pink saris are worn by the Gulabi Gang, a group of women vigilantes in Northern India. They have united and formed resistance to being mistreated as women and of a lower social class, led by Sampat Pal Devi. Kim Longniotto’s documentary film highlights the plight of these women.

"I have seen the pain that women suffer"

Pink Saris is a compelling documentary film about the struggles of women and realities that people face, like the untouchable caste in Northern India. The film has been made by Kim Longinotto, a British award winning director and film-maker. Kim has been directing and producing films since 1976 and has been winning awards for her work since 1995. She is well known for making films which highlight the plight of female victims of oppression or discrimination. 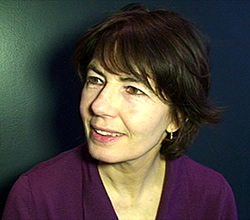 Kim Longinotto won the 2010 Special Jury Award at the Sheffield International Documentary Festival (SIDF) where she also won the Inspiration Award for “Pink Saris.” The trophy was given to a well deserving documentary director who has championed the documentary world.

Kim bases Pink Saris on unknown castings because it aims to depict the issues faced by real women. The film revolves around the central character of the film, Sampat Pal Devi, a forthcoming and bold women, who is the leader of the ‘Gulabi Gang’ (translated as the ‘Pink Gang’) bringing her own brand of justice to areas of Uttar Pradesh, India, combating violence against women. Other characters in the documentary film are Renu Devi, Niranjan Pal, Rekha Paswan, Shiv Devi Patel, and Rampataree Yadav, who all feature as themselves in the film. 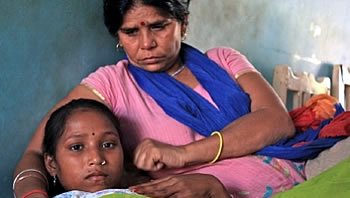 This film is based on a real-life experience of Sampat Pal. Her family resist being known as the lowest social caste. Kim said, “I wanted a cast with no background, to make this film as real as possible.”

Kim Longinotto introduces us to Sampat Pal’s family in the film and the people she helps and confronts in rural parts of Banda, Uttar Pradesh. The filming climate was a challenge for the them, Kim said, “The crew was filming in the heat and muddy areas, but we kept on going.”

DESIblitz caught up with Kim Longinotto and asked her about the film in more depth. Watch what she told us in the exclusive video interview below. 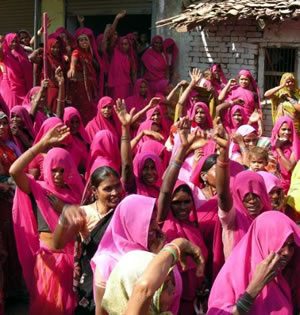 The film shows Sampat Pal being encouraged by her mother in-law to speak up about the cases of women in the film. Sampat Pal has shun political parties and NGO’s with the ‘Gulabi Gang’ because the officials are always looking for bribes. She has helped women become stronger to fight their cause both mentally and physically.

Using the traditional protection of a ‘lathi’ (wooden stick) she has taught women how to defend for themselves with it. Wearing the pink saris, they have beaten men who have abandoned or been violent to their wives, and exposed corruption in food distribution to the poor.

Speaking about the issues, Sampat Pal says: “Nobody comes to our help in these parts. The officials and the police are corrupt and anti-poor. So sometimes we have to take the law in our hands. At other times, we prefer to shame the wrongdoers.”

When Sampat Pal was young, she demonstrated strong signs of rebellion early on in life, protesting against her parents’ decision not to send her to school, she began writing and drawing on the walls, floors and dust-caked village streets. They eventually gave in to her and let her attend school. But she was married off when she was nine years of age. After moving in with her husband at 12 years of age, she became a mother at the age of 13 years. She was forced to live with her in-laws and was beaten by them.

Speaking of her own marriage Sampat Pal says: “I was too young. I didn’t even know what marriage was. If I was to marry now I would choose my own husband or not get married at all.” Her husband was an ice-cream vendor and they hand five children. But he does not work any more and relies on Sampat Pal to care for him. She lives next door to her husband despite being married. They have 12 grand- children and financially it is a strain. 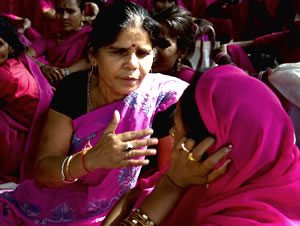 Sampat Pal decided to set up and lead the ‘Gulabi Gang’ after leaving her job. As a former government health worker, Sampat Pal found that her job was not satisfying enough so she sought to do something that would help change lives of people, in particular women. “I wanted to work for the people, not for myself alone. I was already holding meetings with people, networking with women who were ready to fight for a cause,” she says. She felt no one could fight alone and power was something seized from struggle.

“I have seen the pain that women suffer,” Sampat Pal says of her experiences as the leader of the gang. Banda is highly affected by poverty and discrimination and the women bear majority of the the brunt. The society is male dominated and caste plays a major role in it. Demands for large dowries and infliction of domestic and sexual violence on women are a typical way of life. Many people locally are not surprised by the emergence of a women’s vigilante group in such a place.

The documentary shows different facets of the life of the girls and women and their families. It shows Sampat Pal dealing with cases of local young girls who have been beaten, abused, raped and mistreated because of their caste. Renu, an abandoned girl, tells Sampat Pal that she “doesn’t want to live.” Another, Rampyari, has been made homeless by her in-laws because she told of her constant sexual abuse by her father-in-law while his son lives away. Sampat Pal shows tremendous emotional strength and comfort to anyone coming to her with their problems.

Kim Longinotto was delighted about the great experience to work with this cast. She said: 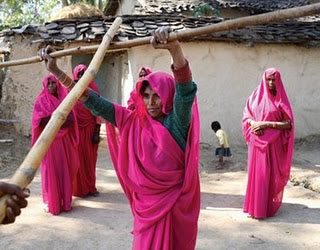 Sampat Pal went through what a usual person from the untouchable caste would go through. Kim said: “The characters had no identity, the crew were trying to get passports for them.” Women seek her out in Uttar Pradesh to help them. She makes big compromises to speak about people’s cases.

The reaction from the characters in the film towards her mattered, Kim felt it was very supportive and said: “The characters did not feel they were looked down upon, they felt we were trying to help them.”

Pink Saris gives us a real insight into the emotions of the characters and the determination of Sampat Pal to give women a chance. This film makes us aware that certain parts of the world are still not modern in terms of women’s rights. Hopefully, practices such as forced child marriages, burning of widows and beating of women will change through movements like these. All in all, an intriguing film by Kim Longinotto.

Smriti is a qualified Journalist with an optimistic take on life, enjoying sports and reading in her spare time. She has a passion for arts, culture, bollywood movies and dancing - where she uses her artistic flair. Her moto is "variety is spice of life."
The Story of Tamasha
‘Dance Like a Man’ a play from India