In 1976, ‘Strikers in Saris’ made headlines with the Grunwick Strike. The Grunwick 40 Exhibition retells the story of the fight and might of Asian women.

In 1976, a courageous and determined South Asian woman, Jayaben Desai, led a workers strike in London which lasted for two years.

The Grunwick Strike 1976-1978 rallied in opposition to Grunwick, a film processing factory that hired many South Asian migrants.

Unfortunately for workers, their working conditions were not ideal. Women were made to ask if they could use the bathroom and men were sacked for working too slowly.

Socially, during the 1970s there was a massive growth of racism and hostility toward ethnic women. These were two things Jayaben Desai was not going to stand for. 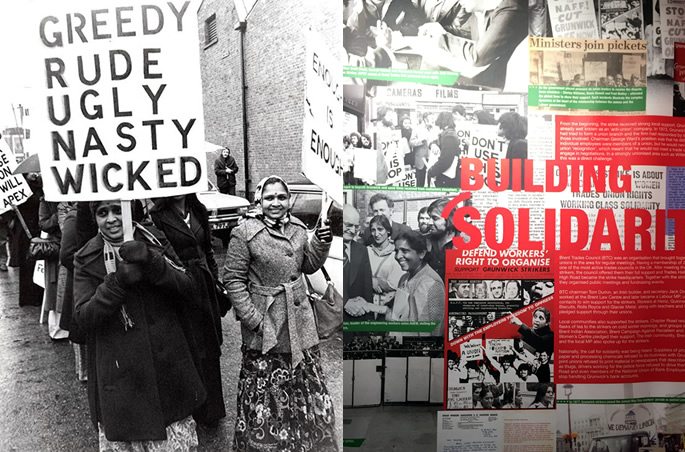 On August 20, 1976, Jayaben and her son Sunil walked out of work alongside six other men in protest of unfair and disgusting treatment from their employers.

Jayaben famously said: “What you are running here is not a factory, it is a zoo. In a zoo, there are many types of animals. Some are monkeys who dance on your fingertips, others are lions who can bite your head off. We are those lions, Mr Manager.”

By September 2, 1976, the Association of Professional, Executive, Clerical and Computer Staff (APEX) declared the Grunwick Strike official, and they stood behind the workers for the majority of the two-year strike.

It is said that the Grunwick Strike was one of the largest mobilisations of support from the UK by trade unions, anti-racist campaigners and feminists.

It saw the hands of all races and both genders being held together in a fight for basic human rights. It saw significant support from the Union of Postal Workers, where white males put their jobs on the line in defence of Asian workers. 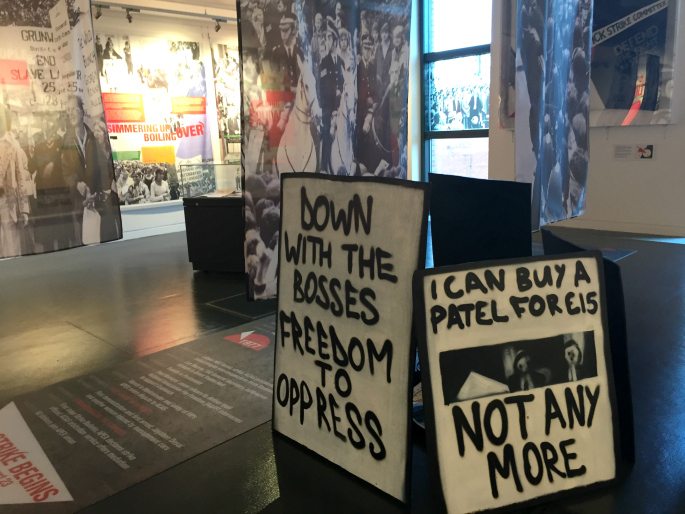 The strike consisted of peaceful picketing, some of which was met by unnecessary police brutality. Toward the end of the strike, support was withdrawn from the Trade Union Congress and APEX so Jayaben started a hunger strike.

As Grunwick still did not have a change of heart, the protest ended in defeat for the strikers on July 14, 1978.

But, was it really defeat?

With 690 days of peaceful protest, the Grunwick Strike has been monumental for future strikes calling for fairer worker safety and rights,

This is all highlighted at the Grunwick 40 Exhibition which is being showcased at Brent Museum & Archives at The Library at Willesden Green.

Jayaben is now a pioneer for workers, especially those who are women and/or Asian.

The exhibition celebrates all that Jayaben Desai and the strikers did. It is visually very moving with banners rich in information, cabinets of Jayaben’s awards and certificates and even a children’s corner with dress-up costumes and colouring pages. 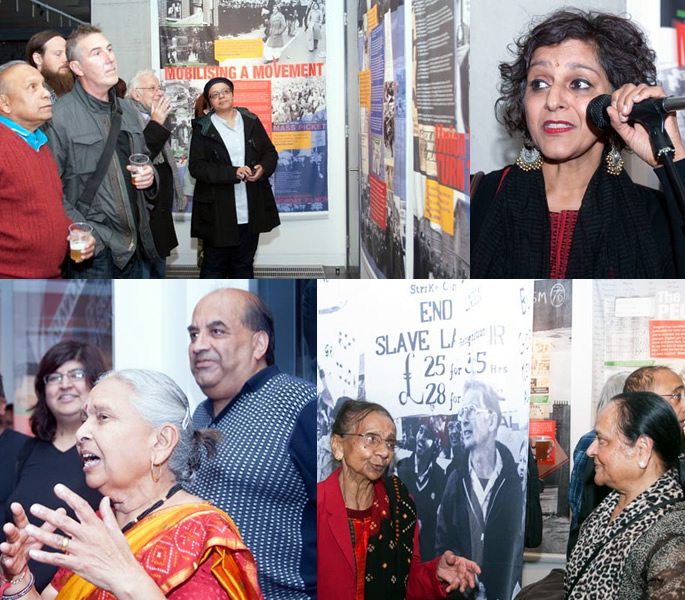 Poulomi Desai is the curator and project manager of the Grunwick 40 exhibition. She most enjoyed her research into the event through:

“Looking through archives and finding these gems from the National archives… the hidden stories that haven’t been told.”

The centre of the floor features a large panel which features a timeline of all the significant events of the strike. Poulomi said:

“The flooring that is a pavement, [we] actually photographed Chapter Road paving stones… recorded some news sounds from Dollis Hill station.

“This happened on a residential street, Chapter Road, and [we] wanted to bring a sense of that street.” 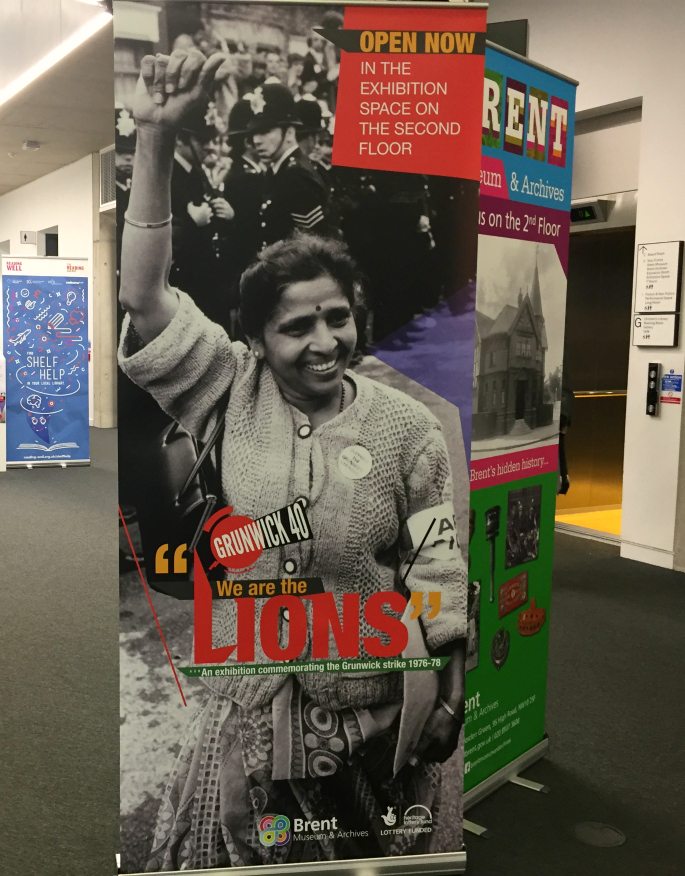 Her favourite piece is the ‘chronology of this floor’: “[I] just loves the floor because it tells its own story very factually as well.”

Sujata Aurora, the chairwoman of Grunwick 40, said about the exhibition:

Sujata’s interest in the strike sparked when she saw the iconic picture of Jayaben Desai with her fist in the air:

“It had an incredibly profound effect on me personally because [she] was questioning these ideas of being a young Asian woman in British society and what your role is… and to see a photo of a woman like that… was incredibly powerful and it was really inspirational.”

Since then the story as a whole became significant to her to look into and become involved with the project.

She is an advocate in looking to commemorate those whose ‘shoulders we stand on’, especially in the recent days of higher political influence and talk of immigration.

The most significant part of the exhibition to her would be the commemorative mural as the committee held a number of workshops for the public to participate in its creation.

Pictures from, and important to, the strike were cut into stencils and then screen printed to be bound together. 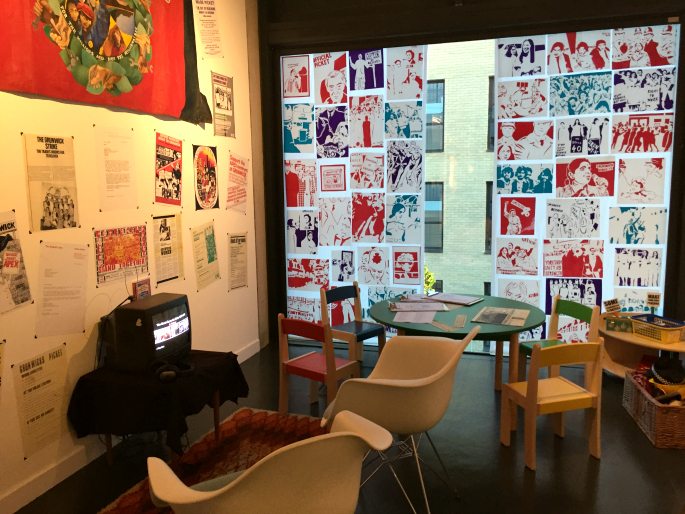 To her, the most beautiful part was that it included all types of people from the community coming together to celebrate a historic event.

Jayaben sadly passed away in 2010 at 77-years-old, but her memory will live on with the help of the Grunwick 40 Exhibition.

Sujata is very open to moving around the country with the exhibition and even broadening it to ‘a new generation’ by taking it into schools.

It is completely free to attend and all are welcome. Go along between 9am and 8pm on weekdays or from 10am to 5pm at the weekend.