“Take a look at more examples from our collection"

“Over the years, traditional Indian dress has been reinvented to create modern garments for new generations.

“Take a look at more examples from our collection that beautifully combine traditional and contemporary Indian design.” 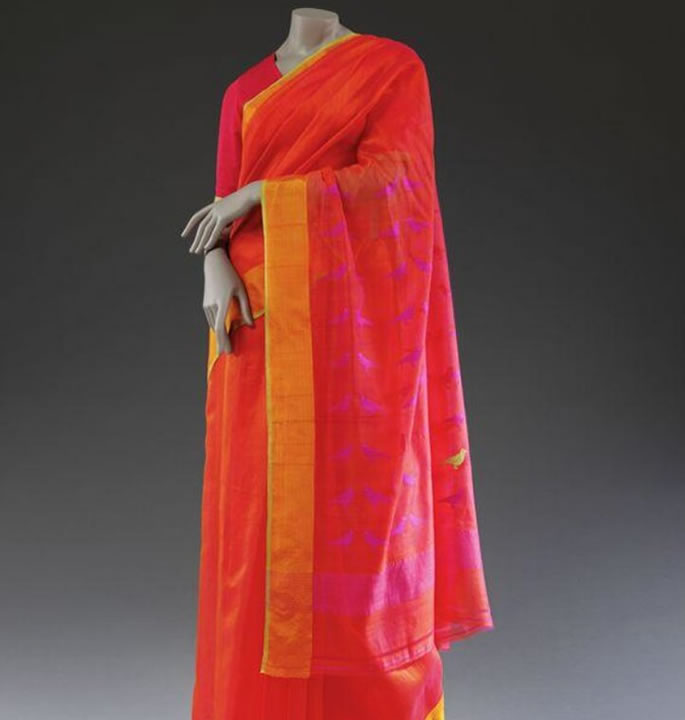 The first in the collection of saris is a red number with an orange border and yellow and pink accents from 2012, designed by Sanjay Garg, the founder of Raw Mango.

The brand, established in 2008, specialises in contemporary Indian handwoven textiles which are crafted using traditional techniques.

He has also been credited with the revival of Chanderi textiles from Madhya Pradesh, brocades from Varanasi and soft cotton from West Bengal. 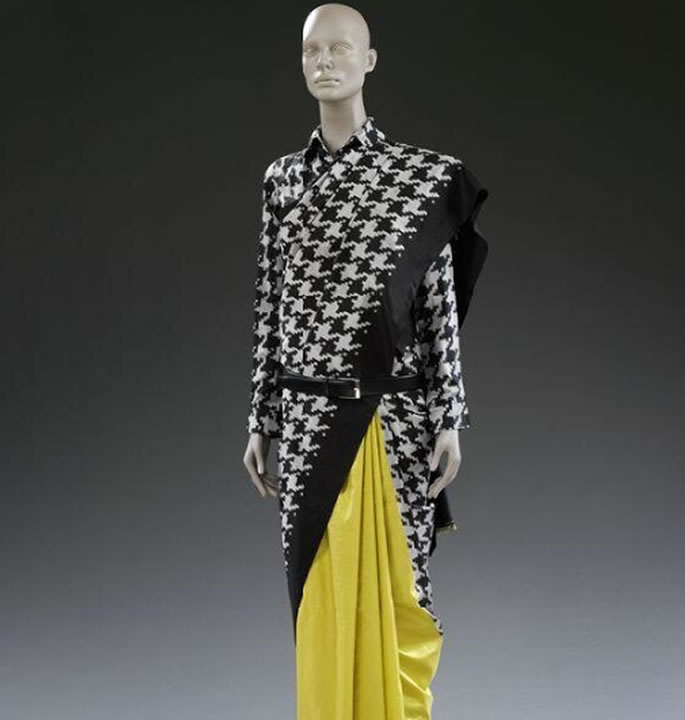 The second is a yellow sari and matching black and white long-sleeve shirt secured by a black belt.

It has been designed by the Karnataka-based fashion duo, Abraham & Thakore in 2011.

Launched in 1992, the company creates non-conforming fashion which reflects modern India by using textiles rooted in the country’s culture but providing a contemporary and international take. 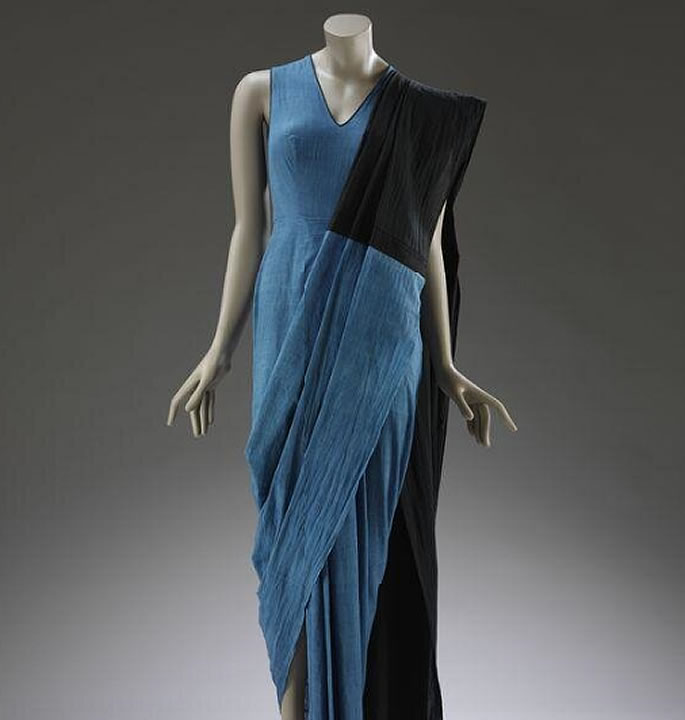 Varma moved to India in 2012 to launch her eponymous label which consists of a series of capsule collections with respect to artisanal craft and female form. 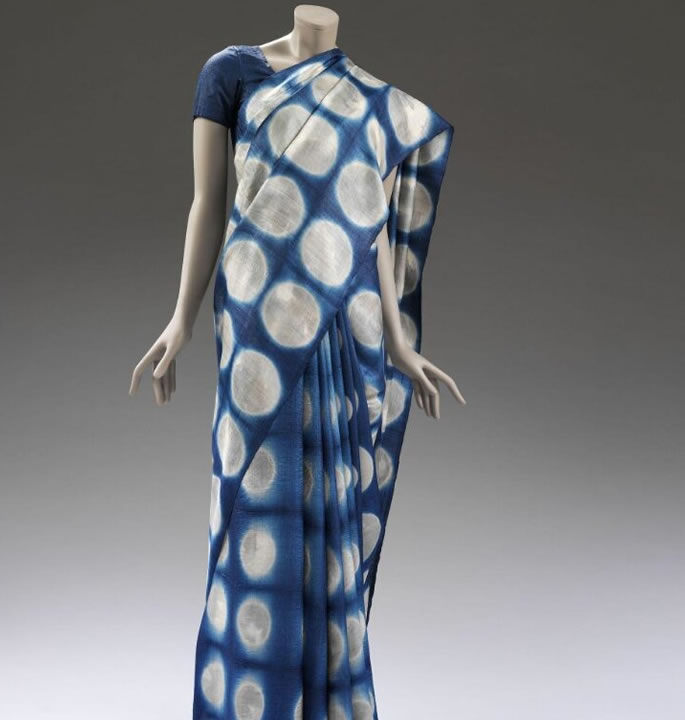 The fourth is called the Moon Sari and refers to the beige moon-shapes all over.

It was designed in 2012 by Mriga Kapadiya and Amrit Kaur.

The two young friends are also Canadian-Indian and moved to India in 2010 where they were inspired by what they saw and drew into their company, NorBlack NorWhite.

Mumbai-based NorBlack NorWhite is a reinvention of traditions to give them a new lease of life in an evolving society. 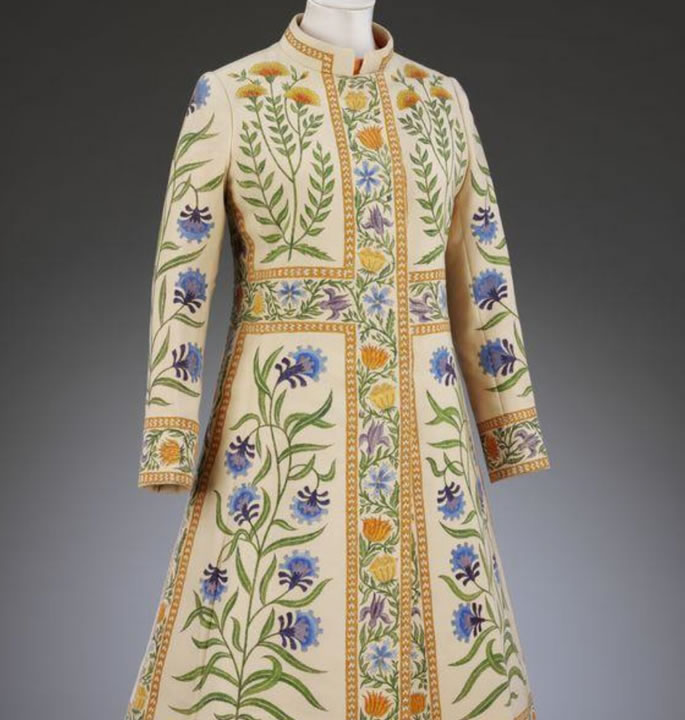 Although not a sari, Wedding Coat is the final outfit to be featured in the Instagram post is also the oldest, dating back to 1970, was designed by England’s Richard Cawley.

He created the ‘Rajputi’ groom’s outfit which was hand-painted while he was an assistant designer at the London fashion house, Bellville Sassoon.

Saris can be traced back to the Indus Valley Civilisation which existed between 2800–1800 BC in northwest India.

They became increasingly popular after cotton first began being cultivated in the subcontinent around 5000 BC to 4001 BC.

Founded in 1852, there are Victoria & Albert Museums across the world with the one in London the largest, housing over 2.3 million different objects.

However, there does not yet appear to be a sari exhibition with many netizens requesting the museum to add one.

Naina is a journalist interested in Scottish Asian news. She enjoys reading, karate and independent cinema. Her motto is "Live like others don't so you can live like others won't."
Indigo: How to Wear Fashion’s Biggest Trend
Diljit Dosanjh named Brand Ambassador of FILA