Who was the First Indian Athlete to win Olympic Gold?

Abhinav Bindra was the first Indian athlete to clinch an individual gold medal at the 2008 Beijing Olympics. We highlight his historic achievement.

“When you win it, you don’t realise or recognise it."

The first Indian athlete to win an individual gold medal at the Olympics came courtesy of the sport, shooting.

Former shooter Abhinav Bindra was the man to have made history for India at the 2008 Beijing Olympic Games. The Indian athlete took the sport up a notch by his gold-winning victory in the finals.

This was a great accomplishment on the biggest sporting stage of all for Bindra who was representing the second most populous country in the world.

The Indian athlete was born in Dehradun, Uttrakhand, India on September 28, 1982. From a very early age, he took up the sport of shooting.

Whilst still actively participating in tournaments, he co-wrote his autobiography titled: A Shot at History: My Obsessive Journey to Olympic Gold (2011).

The book not only looked back at the Olympics but also reflected on many other successful medals he collected across various international competitions.

Let’s take a closer look at the gold medal win of Abhinav Bindra. We also focus on how this Indian athlete became triumphant. 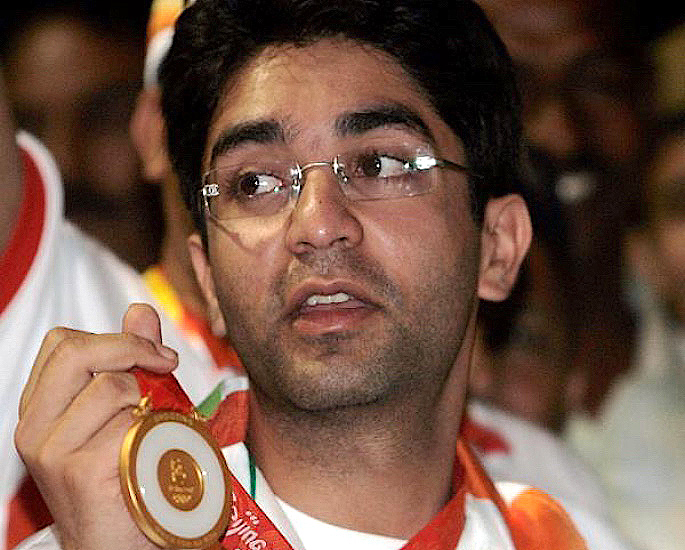 Abhinav Bindra made history after becoming the first-ever athlete from India to win an individual gold.

He accomplished this amazing feat at the 2008 Bejing Olympic Games after coming on top in the 10-metre air rifle event.

This was the first Olympic gold for India, since 1980 when the country won the field hockey event. It was also a big deal because this is the first time outside of cricket that an Indian athlete had excelled.

With this attainment, Bindra enjoyed every bit about the golden moment of his life. Being the only gold medallist from the Olympics, the Indian athlete had taken the limelight.

As a result of making India proud, the government and other stakeholders gave him several financial prizes. This was the least they could do, with so very little funding available when preparing for the Olympics.

In fact, it was his affluent father who funded a training trip in Europe under a Swiss citizen prior to the Olympics. 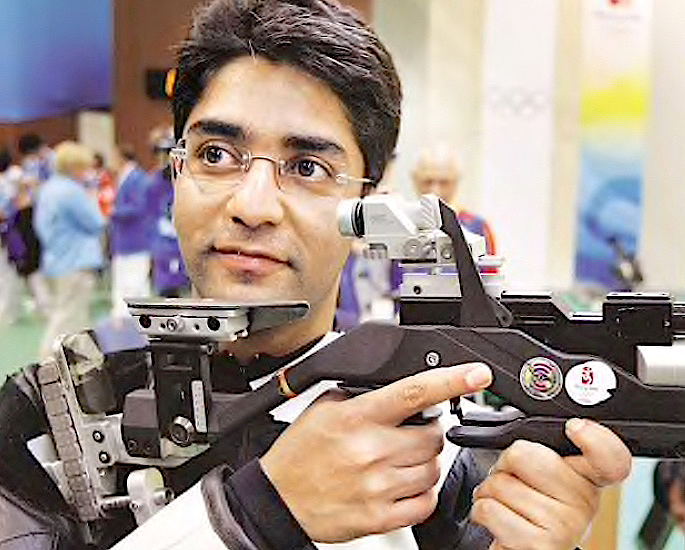 “When you win it, you don’t realise or recognise it. But over time, you do. It is something we as a country were waiting for and it happened on that particular day.

“The glass ceiling had to be broken, someone had to do it and I feel fortunate that I was the one who was able to do it. Now that it has been done, we are hoping that a lot more people are able to do it.”

Upto 2016, it is surprising that no one else had bagged an individual gold.

How he won Gold?

The Men’s 10-metre air rifle competition during the 2008 Olympics had taken place at the Beijing Shooting Hall on August 11. During this event, he fired a total of 700.5 shots.

Bindra came through a qualifying round where he fired sixty shots using an air rifle. The shooting range was 10 metres from his standing position.

During the qualifying phase, he had a score of 596, finishing in fourth place. He carried forward his qualifying score into the final. This meant he had to really concentrate and work out the necessary calculations.

In the finals, a round of 104.5 enabled him to outscore everyone else.

Heading into the final shot, Bindra was tied with Henri Hakkinen (FIN).

However, Bindra held his nerve, as he scored 10.8, the highest of the finals. Hakkinen had to settle for a bronze medal, after managing only 9.7 with his final shot. 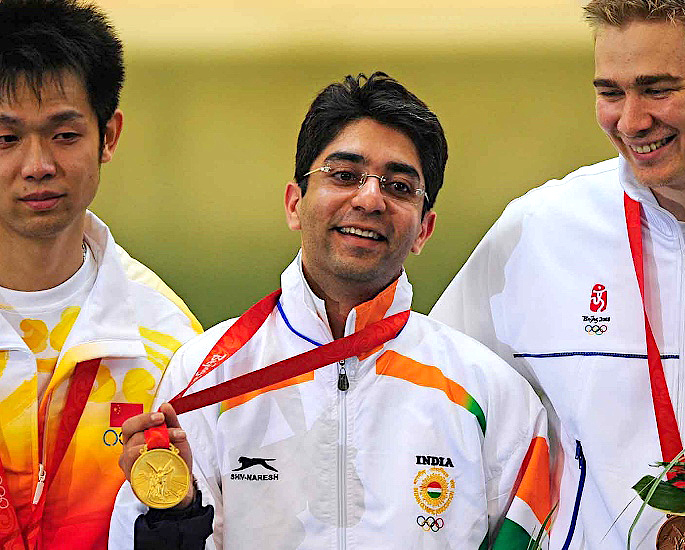 It was a great honour and impactful moment when he saw the tricolours of the Indian flag and receiving his gold medal.

Bindra chronicles his successful quest in the autobiography, A Shot at History: My Obsessive Journey to Olympic Gold.

Published by Harper Sport, Bindra is the co-author of the book with sports journalist, Rohit Brijnath. According to Bindra in the book, shooting is a lonely sport. He describes the winning moment from Beijing as a “relief.”

But he modestly has somewhat forgotton 2008. He mentions: “I can’t be immersed in the past.”

Having said that in 2018, Bindra went on twitter to talk about the gold medal on its tenth anniversary. He tweeted:

Bindra was also bestowed with many awards in recognition of his sporting achievements.

His accolades include the 2009 Padma Bhushan, India’s highest civilian award and the famous Blue Cross from the International Shooting Sport Federation (ISSF).

Bindra made the decision to retire from the sport on September 5, 2016. This Indian athlete may no longer be competing, but he has paved the way for many others to win an individual gold medal at the Olympics.

Faisal has creative experience in the fusion of media and communication and research which increase awareness of global issues in post-conflict, emerging and democratic societies. His life motto is: "persevere, for success is near..."
Does Pakistan Cricket lack Batting Talent?
Darren Sammy reveals Racist Abuse by Sunrisers Hyderabad