Newlyweds Virat Kohli and Anushka Sharma celebrated a grand Bollywood wedding reception in Mumbai. The happy couple were joined by the top stars of film and sports.

“Now I have to leave to catch my flight else Virat Kohli and Anushka Sharma will kill me!”

The worlds of Bollywood and cricket collided at the second wedding reception of newlyweds Anushka Sharma and Virat Kohli.

Held on 26th December at the lavish St. Regis Mumbai, celebrities from across India joined in the wedding festivities of the star couple.

Also on the guest list was Priyanka Chopra. The actress spent the day in Delhi delivering the Penguin Annual Lecture. Following the talk, PeeCee allegedly told the audience:

“Now I have to leave to catch my flight else Virat Kohli and Anushka Sharma will kill me!”

The actress eventually arrived in a traditional gold and green saree with matching gold jewellery. 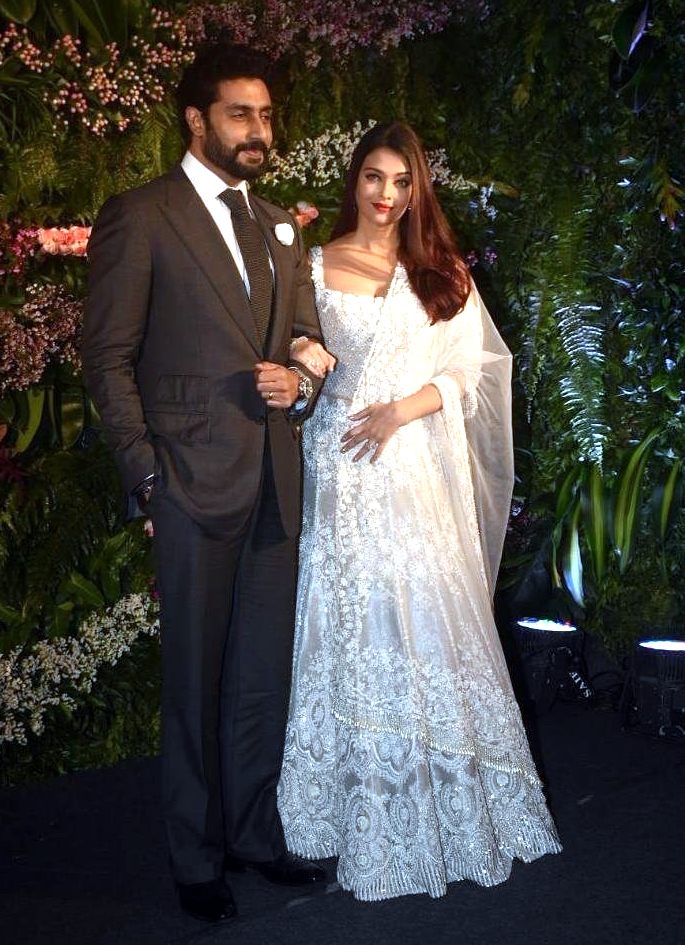 On the sports side, ace badminton player Saina Nehwal joined Sachin Tendulkar and his wife and daughter at the glitzy affair.

Much of Virat’s cricketing team also attended. MS Dhoni arrived with his young daughter and Yuvraj Singh and Harbhajan Singh also dropped by. 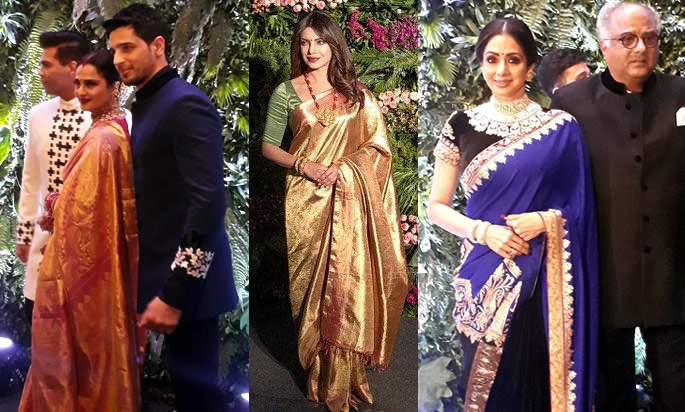 While his family came early to greet guests, Virat and his wife Anushka arrived in true star style.

“For her Mumbai reception, Anushka wanted to wear old-world glamour. And we decided to ‘Jazz’ it up in smoky grey.” 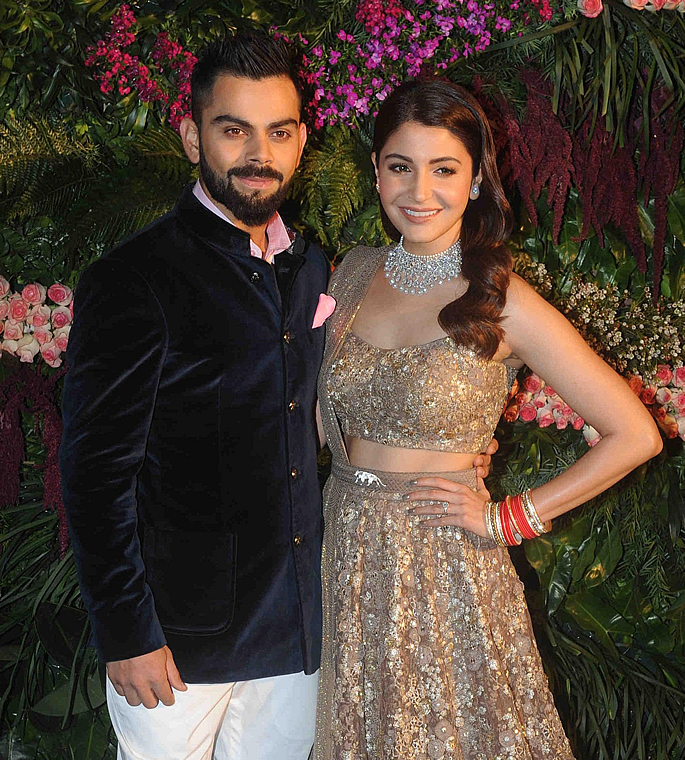 Anusha’s jewellery was also Sabyasachi. Her necklace and earrings were both handcrafted with rose cut diamonds, solitaires and briolettes from the designer’s fine jewellery collection.

While the bride may have opted for Sabyasachi, the Bollywood stars looked to their favourite designer Manish Malhotra to style them. In particular, Aishwarya Rai Bachchan looked perfectly glamorous in a white lace and pearl lehenga. 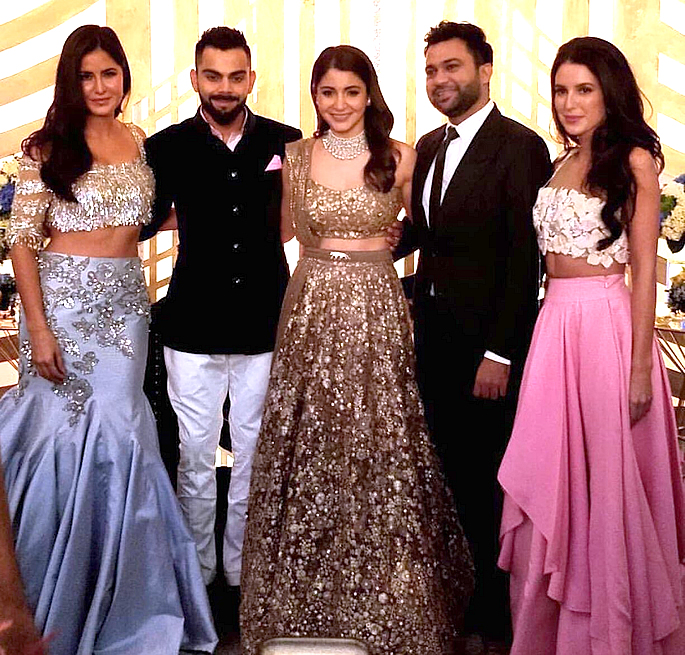 Also on the grey carpet was Tiger Zinda Hai star Katrina Kaif. The star who is enjoying the success of her second film with Salman Khan was joined by her sister Isabelle. Both beauties looked breathtaking in their flowing Manish Malhotra lehengas in lilac and pink.

Sridevi opted for a more traditional look that was no less stunning. She wore a pashmina velvet saree in electric blue and black block colours featuring real zari tilla embroidery.

With so much of the filmy industry together under one roof, it became quite the party. Videos of SRK leading the married couple onto the dance floor amidst popular Bollywood tunes are also floating around social media.

We are loving this! @iamsrk grooving to #ChaiyyaChaiyya with @imVkohli is the most adorable thing ever. pic.twitter.com/y617opmkeN

The superstar also tweeted his congratulations to the couple, saying:

“My love and most most happiness to @AnushkaSharma @imVkohli so happy to see them married.”

Earlier in the day, Virat and Anushka were snapped making their way towards the Mumbai venue ahead of the evening’s festivities. Anushka was spotted in a casual denim jumpsuit while Virat wore a t-shirt and jeans.

This is the second part of Virushka’s post-wedding celebrations. The couple hosted a glamorous Punjabi wedding reception with family at New Delhi’s Taj Diplomatic Enclave on 21st December. This was following the secret and incredibly romantic Tuscan wedding that took place earlier this month.

The couple will live in Mumbai, where Virat has purchased a sea-facing apartment in Worli. Following the wedding celebrations, the couple will fly to South Africa.

Virat is expected to stay on for an upcoming cricket series while Anushka will return to Mumbai in the new year and continue shooting for her upcoming film with Aanand L Rai, as well as doing promotions for Pari.

See more pictures of #Virushka’s Bollywood reception in our gallery below: 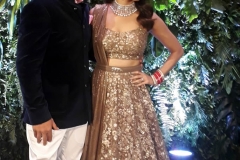 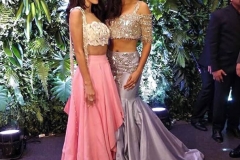 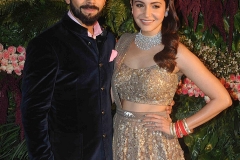 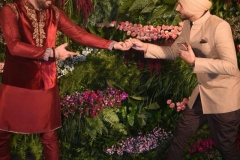 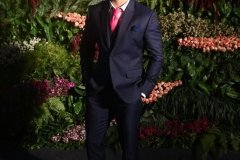 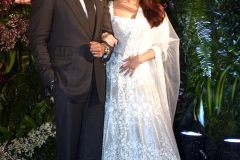 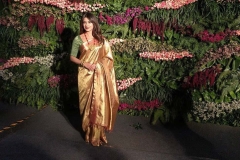 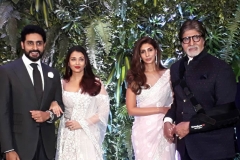 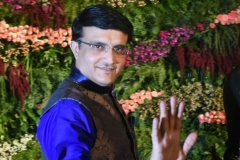 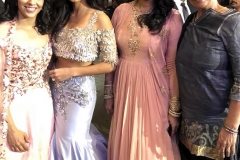 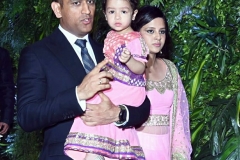 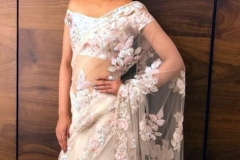 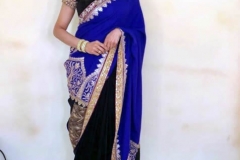 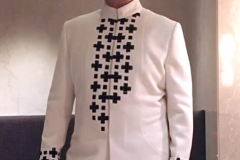 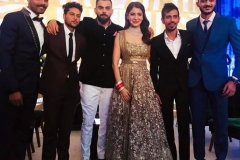 Aisha is an editor and a creative writer. Her passions include music, theatre, art and reading. Her motto is “Life is too short, so eat dessert first!”
5 Must-See Photos of Adorable Misha Kapoor
7 Filmy Looks of Salman Khan that You Must See