Misha Kapoor, the young daughter of Shahid Kapoor, is one of Bollywood’s cutest kids! Take a look at these photos which will make you go gaga.

"Doesn't Misha just look totally adorable as she shows off her beautiful smile?"

It’s fair to say that every fan of Shahid Kapoor has fallen in love with his darling daughter, Misha Kapoor. Despite her young age of one, she’s already taken social media by storm.

When Shahid shares an image of the youngster, fans send plenty of praise and turned photos into viral hits.

From selfies to Misha enjoying ‘pool time‘, she brightens up every image she appears in!

Similar to Taimur Ali Khan, even the paparazzi can’t wait to snap pictures of the toddler. Perhaps Misha is a future Bollywood star in the making?

Let’s then take a look through some of her cutest photos. Ones that will make you go gaga over the adorable girl! 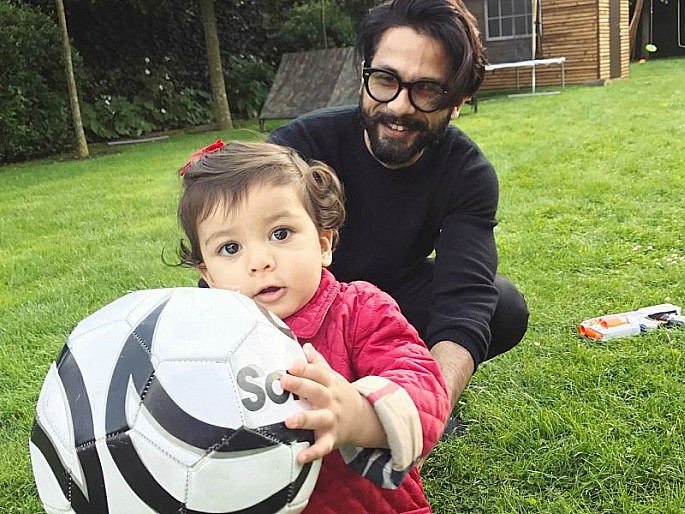 As mentioned, Shahid enjoys updating fans with the adventures of little Misha. In this photo, we get to see her sporty side as she plays with a football.

However, it appears she’s still quite young to understand the rules. Instead of kicking the football, she holds it with her hands!

She’s wrapped up warm in a red, quilted coat, with her hair loose in natural curls. Her growing fringe is held back with a red clip.

Meanwhile, Shahid holds her, keeping her steady. He shows a big smile, proud of his delightful daughter. Fans loved the image, with over 900,000 liking it on Instagram. 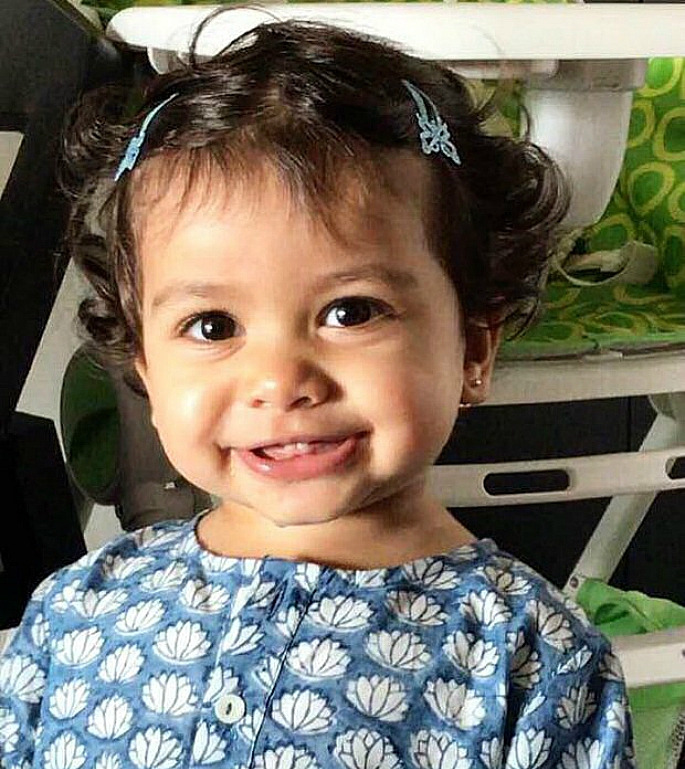 Doesn’t Misha just look totally adorable as she shows off her beautiful smile? Her uncle, Ishaan Khatter, shared this on Instagram and titled it as: “Chacha’s guchki baby.”

She wears a blue dress, decorated with white, floral patterns. With butterfly clips in her hair and gold studs in her ears, the one-year-old greets the camera with a big smile.

We also see how she resembles Shahid, especially with her chocolate brown eyes. No wonder she’s gathering a huge fanbase herself!

But it seems apart from her parents, Ishaan Khatter is also one of her biggest, devoted fans. 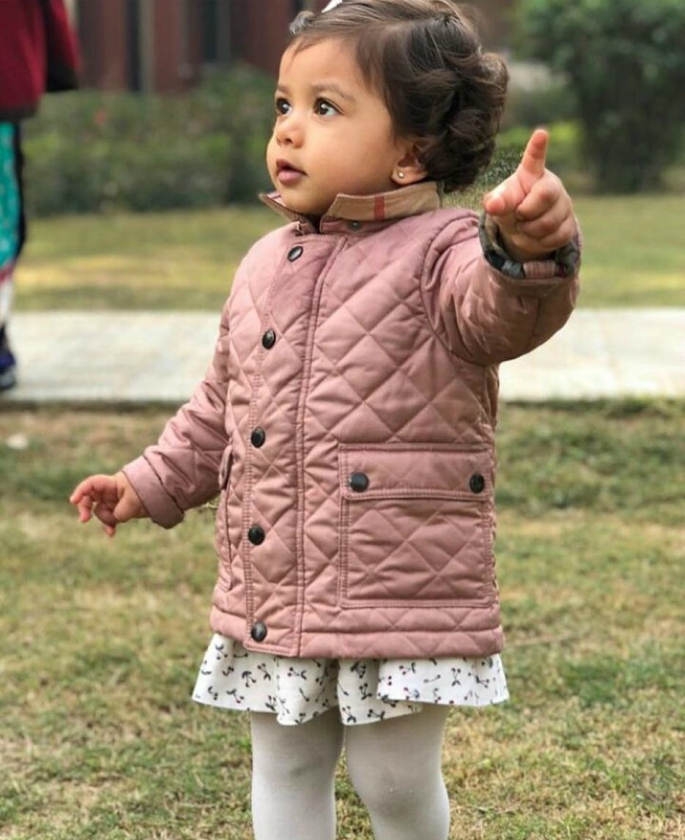 Something has caught the eye of the toddler in this image. She looks up to a person, perhaps Shahid or her mother Mira, and points with her finger. We wonder what has prompted such interest?

Misha looks all set for the cold weather, as she dons a pink, quilted coat. Underneath, she wears a cream dress with patterns of cherries.

With her hair in its natural curls, the one-year-old looks utterly angelic.

We also reckon she could turn into a future fashionista, especially with the stylish coat. Wouldn’t you agree? She also made headlines for her enchanting Diwali look, which you can see here. 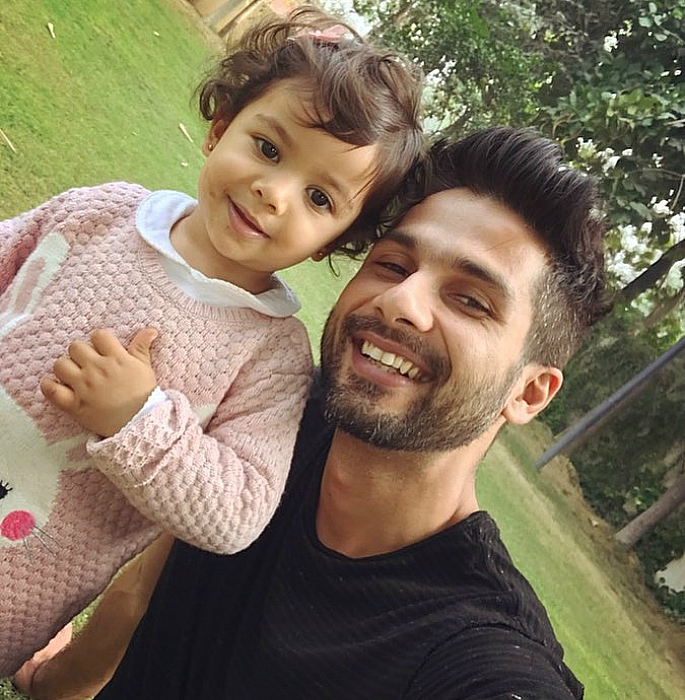 Posing again with her father in a selfie, this image highlights the love and devotion of Shahid has for his daughter. The actor takes the picture, grinning with his hair slicked back.

Meanwhile, Misha wears a fun, pink jumper with a cute bunny-rabbit graphic on the front. We wonder if rabbits are her favourite animals?

The one-year-old has mastered the art of selfies with this photo. With a huge grin, she gazes straight at the camera with her adorable eyes.

With over a million likes on Instagram, this proved a popular hit amongst fans. And with Shahid describing his daughter as an “angel”, we can’t help but agree! 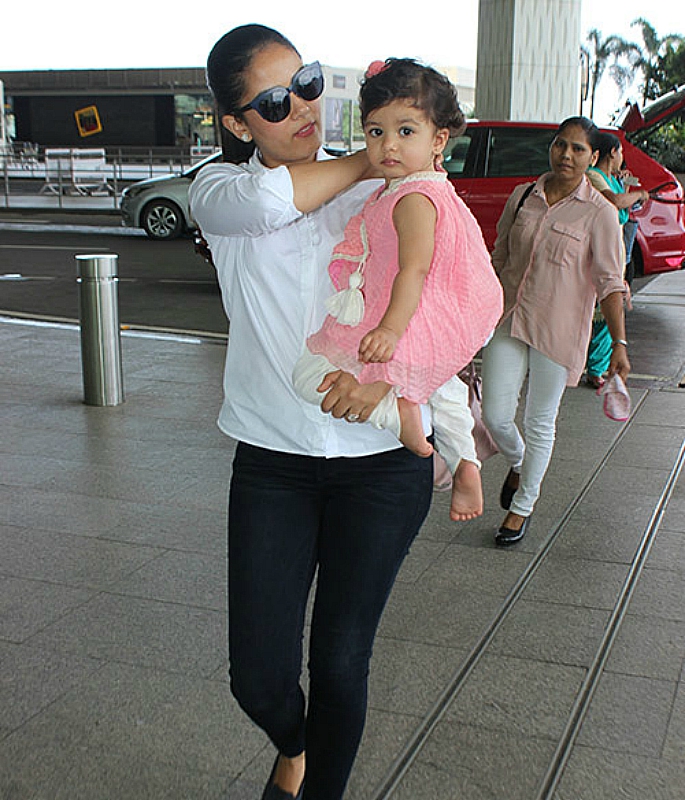 Misha shows off her natural sense of style in this pretty airport look. Her mother Mira carried her as they arrived at Mumbai airport.

The young fashionista wears a bright, pink dress with white trousers. Her hair is styled into light curls, along with a pink flower clipped in.

Her look caused many to compare her to the Disney princess Moana; we have to agree she looks enchanting in this princess outfit!

Mira looks chic and stylish as she wears a white shirt with a pair of black trousers. No doubt as Misha grows older, she will continue to dazzle us and create fashionable looks with the help of her mother.

These adorable pictures show us how Misha Kapoor has grown into a beautiful, delightful girl.

While she is still getting used to the paparazzi, we’re sure she’ll flourish and embrace the camera like child stars such as Aaradhya Bachchan.

Until then, we can’t wait to see future photos of the little girl on Shahid’s Instagram. Speaking of the actor, why not take a look at some of his best, electrifying dances moves!