"You guys took him to a sheesha place."

Indian tennis player Sania Mirza got into a Twitter spat with Veena Malik after the actress called out the Pakistan cricket team for enjoying a night out before the match against India.

A picture of Mirza’s husband Shoaib Malik and other Pakistani cricketers having dinner at a shisha café in Manchester went viral.

The photo circulated a day before the clash against India on June 16, 2019. This prompted social media users to slam the players for jeopardising their diets and training before the anticipated match.

Pakistan went on to lose the match by 89-runs which angered fans even more.

Some people claimed they saw Malik smoking shisha at 2 am at the restaurant while others said the players were eating “burgers and pizza”.

Among the critics was Veena Malik who took to Twitter to question why Sania Mirza bought her baby son Izhaan to the restaurant, exposing him to the hazardous smoke.

She wrote: “Sania, I am actually so worried for the kid. You guys took him to a sheesha place. Isn’t it hazardious?

“Also as far as I know Archie’s is all about junk food which isn’t good for athletes/boys. You must know well as you are mother and athlete yourself?”

Sania, I am actually so worried for the kid. You guys took him to a sheesha place isn't it Hazardious? Also as far as I know Archie's is all about junk food which isn't good for athletes/Boys. You must know well as you are mother and athlete yourself? https://t.co/RRhaDfggus

Sania then replied: “Veena, I have not taken my kid to a sheesha café, not that it’s any of yours or the rest of the world’s business. I think I care about my son a lot more than anyone else does.

“Secondly, I am not the Pakistan cricket team’s dietitian nor am I their mother or principal or teacher to know when they sleep, wake up and eat.”

Sania Mirza then added: “Thank you for your concern though… it means a lot.

“Twitter cracks me up and some people for sure. You guys really need other mediums for taking your frustrations out.”

The pictures of the dinner also prompted cricket fans to slam them for allegedly breaking their curfew a day before an important match. 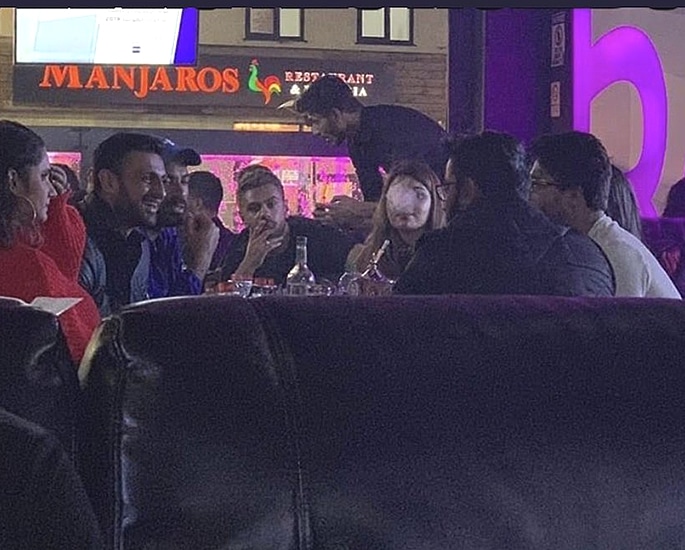 However, the Pakistan Cricket Board (PCB) rubbished the rumours and said the dinner actually happened on June 13, 2019, and did not break their curfew.

A spokesperson for the PCB said: “The cricketers did not violate their curfew.

“The videos and photographs that went viral (on social media) are from two days before the match. The day before the match, all the players were in their hotel room by curfew time.”

Shoaib Malik also said that the night out was from June 13, not June 15.

When will Pak media be accountable for their credibility by our courts?!

Having served my country for +20 years in Intl Cricket, it’s sad that I have to clarify things related to my personal life. The videos are from 13th June and not 15th

“On behalf of all athletes. I would like to request media and people to maintain respect levels in regards to our families, who should not be dragged into petty discussions at will. It’s not a nice thing to do.”

Dhiren is a journalism graduate with a passion for gaming, watching films and sports. He also enjoys cooking from time to time. His motto is to “Live life one day at a time.”
Amir Khan promises to Avenge Pakistan’s Cricket Loss
How Mo Salah dealt with Man who Robbed his Family