With India unveiling their ICC ODI Cricket World Cup kit for 2019, we take a look back at the coloured jerseys the Men in Blue have worn since 1992.

The colour blue is familiar when it comes to the One Day International (ODI) Cricket World Cup kit for team India.

Continuing in a similar fashion to all previous colour clothing editions, the 2019 Indian Cricket World Cup team will once again walk in the middle in a blue outfit.

India has been donning a blue jersey since 1992 when colour clothing was first introduced in a world cup down under.

During the first two world cups, India and all other teams wore a uniform kit, with different colour tones separating them.

In over five world cups, team India has worn kits with different shades of blue.

The tricolour from the Indian flag was dominant in various styles during the 2003, 2007 and 2011 world cups. 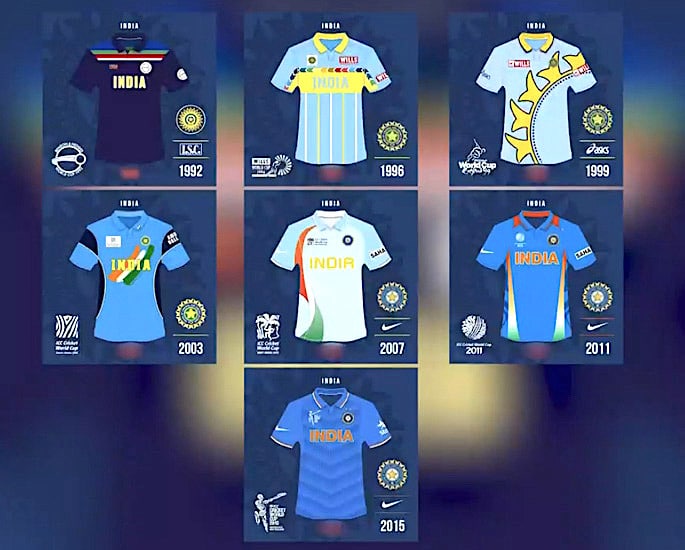 The 2011 Cricket World Cup kit was memorable for the fans as India won their second world cup – first in coloured clothing.

We take a look at the evolution of the Indian Cricket World Cup kit over the years: 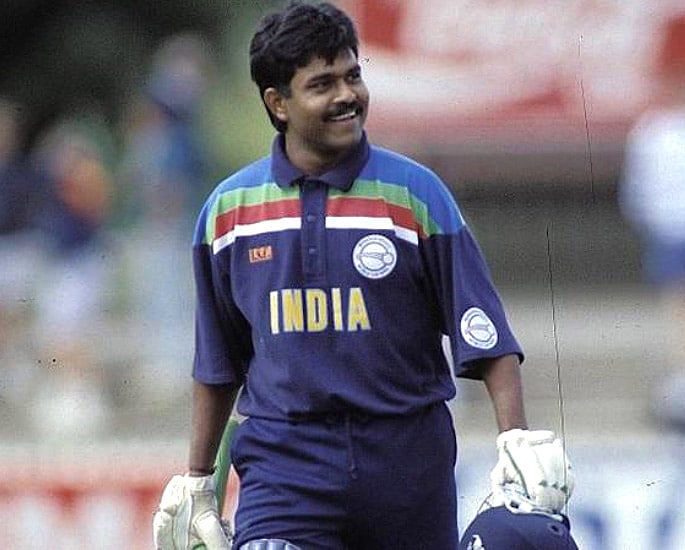 It was at the 1992 Cricket World Cup that we saw universal colour kits for the very first time.

Down under, the team wore a dark blue-indigo jersey, with white, red, green and blue stripes on the shoulders.

The stripes were similar to colour bars on TV as seen in the test pattern phase.

The shirt had ‘India’ written in san serif at the front, with names of players on the back.

On the left-hand side of the shirt, the official event logo was also visible. Complimenting the 1992 coloured clothing cricket world cup kit, Sharath Suresh Krishnan posted on Facebook, writing:

“1992 was the first World Cup jersey and probably was the best. Not just for India but for all teams.” 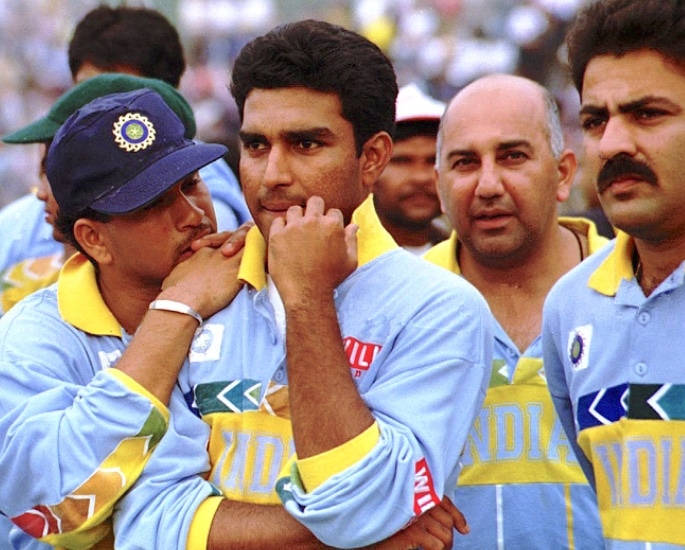 Four years later, team India donned a lighter shade jersey, which was in the middle of clear day blue and baby blue. The 1996 tournament also had uniform kits for all team, with differences in colour only

A huge stripe of sunny yellow runs through the middle with Indian inscribed in blue.

Beneath that, The jersey also had alternating horizontal white and yellow stripes. The horizontal lines look the tough metal bars of an Indian prison

The yellow stands out in the sleeves and collars too.

A  band of colourful rainbow video arrows are visibly running across the chest and down the sleeves.

Despite the multi-coloured arrows looking like road signs, they were symbolising the other teams competing at the tournament. 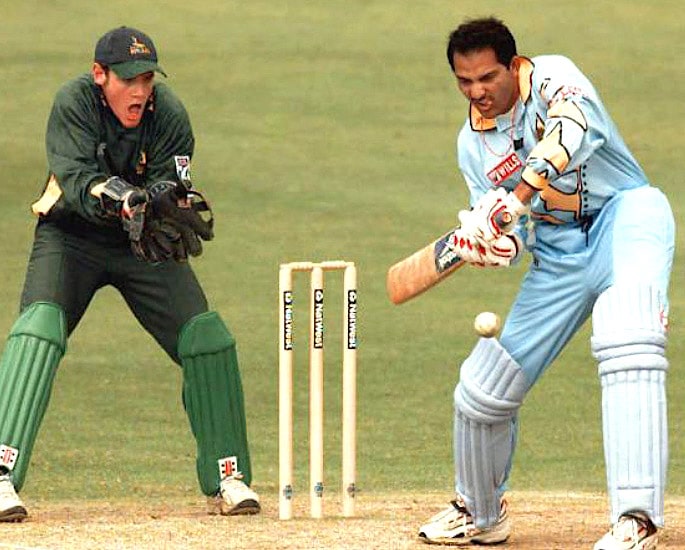 Team India had worn a more vibrant kit for the mega event held in England.

The sky blue jersey was perfect to brighten across England’s overcast conditions.

Besides the yellow, with black border collars, there were the same colour themes running a diagonally across the chest and arms.

It was as if the emblem was representing sharks undergoing training for a co-ordinated swimming session.

The Indian cricket team logo is visible on the top left-hand side of the jersey. A fan named, Kedar Panditrao posted on Facebook, describing the 1999 kit as the ‘best’  donned by the Indian team at the world cup: 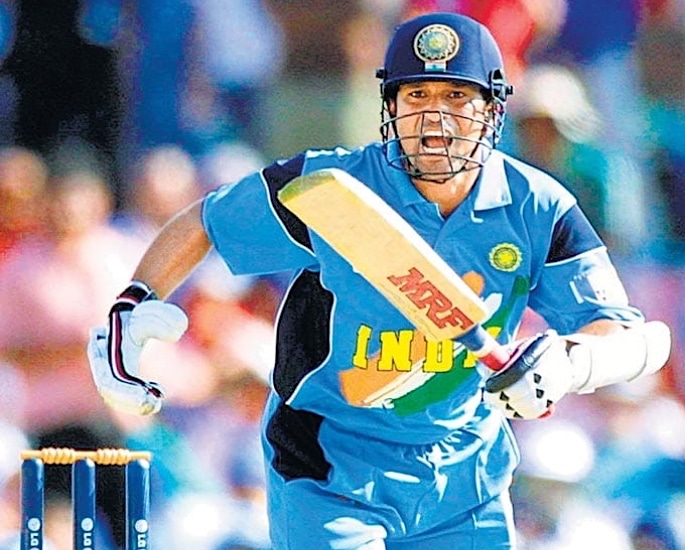 For the world cup in Africa, the team outfit did get a refreshing face-lift.

Apart from the bold and joyful written font of ‘India’ across the middle of the T-shirt, yellow was completely wiped out for this kit.

Fingertip painting like strokes of the Indian tricolour made its debut on the front of the 2003 jersey.

A small tricolour from the Indian flag also appears on the blue collars and on both sides of the track pants.

The kit has black patches across the shoulders and sides. 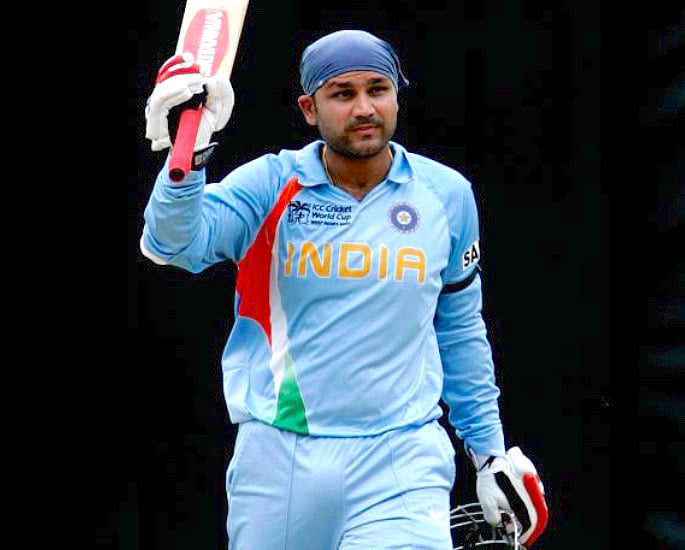 Nike revamped the colour and pattern for India’s team that went to the West Indies.

The lighter blue shade jersey was a lot classier. There were no longer any black patches across the outfit.

The word ‘India’ had a new font slightly higher on the chest, with the tricolour moving from the centre to the right-hand side of the jersey in a swirling fashion.

The track pants had stylish cuts on the knees. On the top left-hand side, the Indian cricket emblem is visible.

The specific world cup logo appears on the top right-hand side just beneath the shoulders. 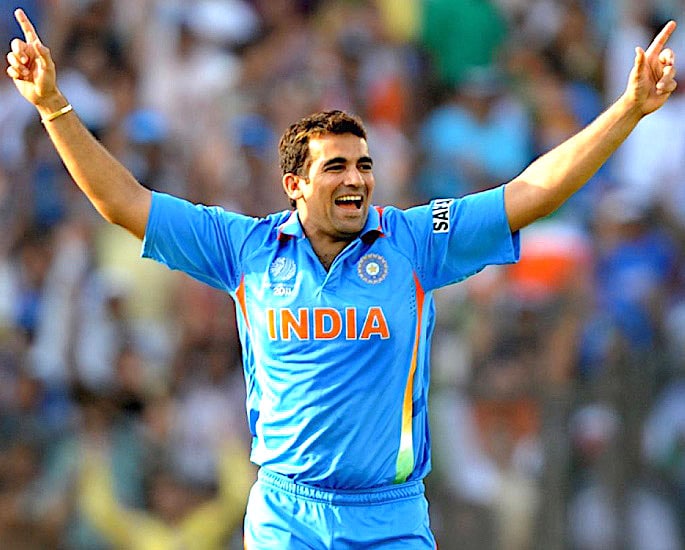 Fans of the Men in Blue will always remember the 2011 kit as India won the Cricket World Cup after twenty-eight years.

The t-shirt had a slightly darker yet vibrant blue look, with the text of India emblazing in Orange. The collars also had an orange lining.

The aesthetic and patterns feature on the sides. The diagonal style tricolour stripes appear on each side of the torso.

The ball-shaped logo is placed on the top right-hand side, with the Indian cricket motif on the other side. 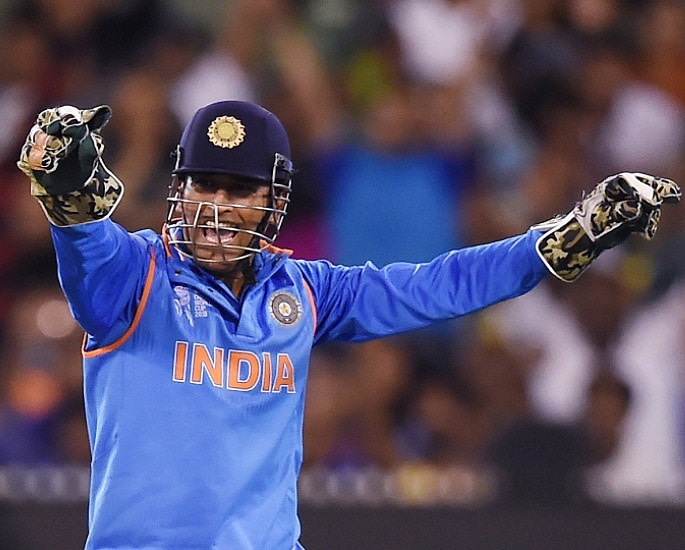 For the cricket world cup down under, the kit of the world cup had yet another makeover.

The jersey that the team wore was made using recycled plastic bottles.

The blue shade was like the one that the team donned at the 2011 world cup, with the only difference being the darker patterns.

Once again the name of the team is in orange with a white outline around the text. The official logo for the cricket team and world cup remain in the same position as seen in 2011. 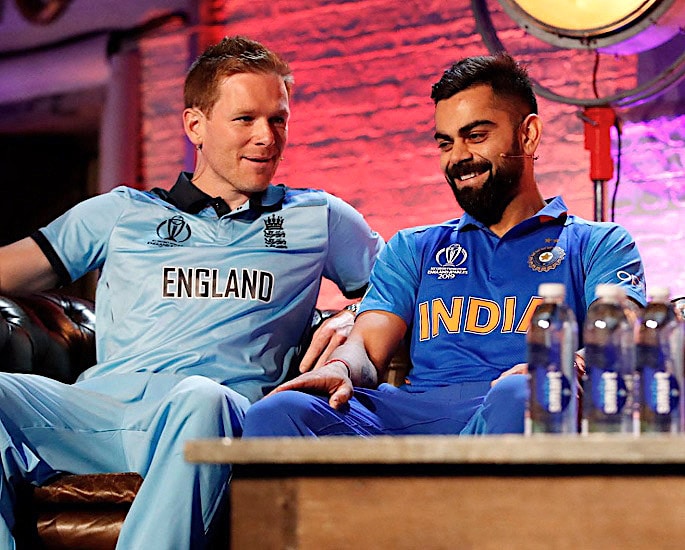 The 2019 Cricket World Cup has a similar blue to the 2011 tournament, with the traditional name team in orange and a white border around it.

The T-shirt is very lightweight in design. Above the cricket team logo on the left is three stars, indicating the teams three world cup triumphs.

Behind the back collar, there are some interesting facts, with dates of when India won the two fifty over  World Cups and one World T20.

With the International Cricket Council (ICC) introducing home and away kits for the first time, India will also be wearing an orange jersey when they face England.

With both countries normally wearing the traditional blue, India will have to dress in orange against the hosts.

Fans will be wearing some of the old kits during the 2019 world cup matches the 2019 Cricket World Cup.

The official Cricket World Cup kit will also be worn by, along with other variations available on the official store.

Virat Kohli is No.1 Batsman ahead of Cricket World Cup 2019
Amir Khan slammed by His own Trainer Virgil Hunter