"I thought, let him bowl another over. "

An all-time India Cricket World Cup XI would be a very exciting team in One Day International (ODI) cricket. Along with the West Indies and Australia, India is the only other team to have won the world cup twice.

Under the great leadership of Kapil Dev, India became the first nation from the subcontinent to win the world cup in 1983.

Then twenty-eight years later, the charismatic Mahendra Singh Dhoni led the Men in Blue to world cup triumph in 2011.

With many players performing brilliantly in the two world cups, it is a tough selection for an all-time India ODI World Cup XI.

Looking at history, the final XI would be made of high calibre batsmen, great all-rounders and terrific bowlers. 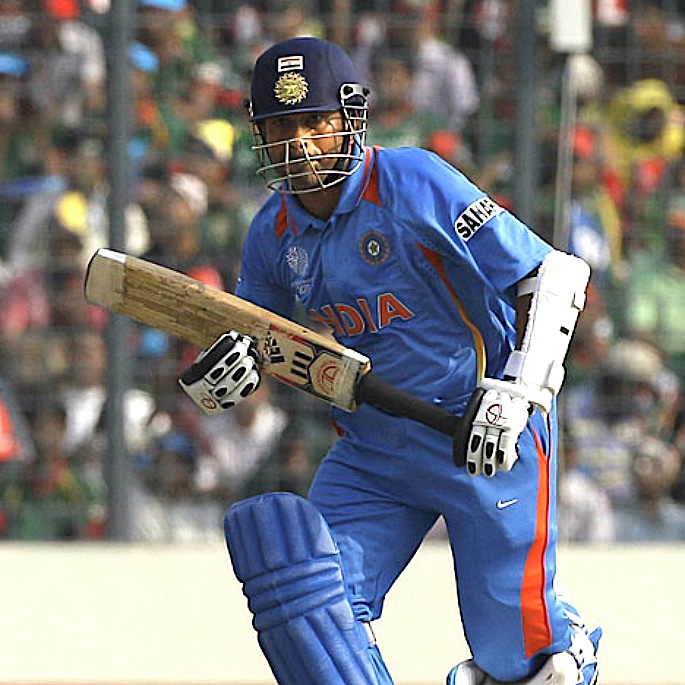 The experience of Sachin Tendulkar playing six world cup events makes him an automatic choice to open the batting.

In forty-five matches, Tendulkar aka the ‘Master Blaster’ had made 2278 runs, making him the highest run scorer in world cup history. His strike rate of 88.98 is phenomenal, considering he had a high average of 56.95.

The legendary batsman made his world cup debut in 1992 tournament as an 18-year-old. After accumulating 673 runs in the 2003 Cricket World Cup and losing to Australia in the final, many did wonder if he was ever going to win the coveted trophy for India.

However, in 2011 his dream of lifting the world cup came true, as India beat Sri Lanka by six wickets.

The victory was even more special for the little master as India won the mega event in front of his home crowd at the Wankhede Stadium, Mumbai.

In the 2011 world cup itself, he was averaging 53.55 after nine matches. His highest score of 120 from the 2011 Cricket World Cup came against England in India’s second Group B game. 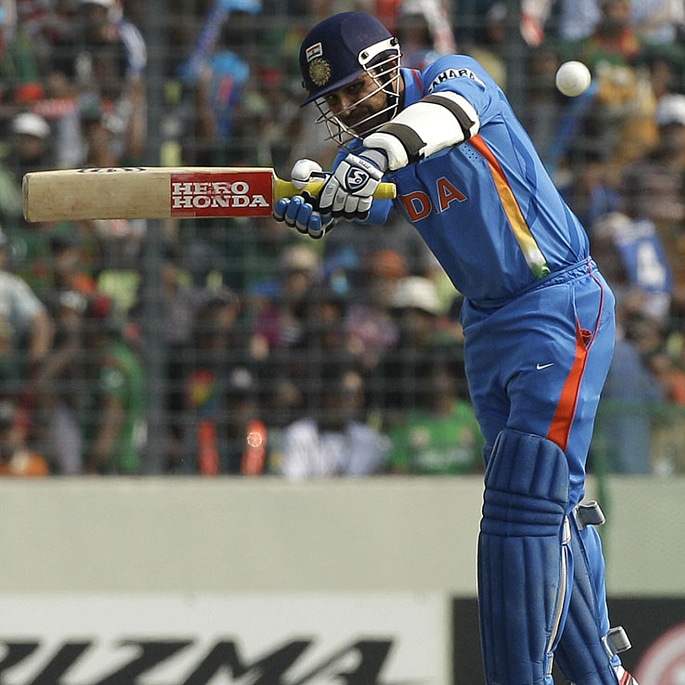 Joining Sachin at the top of the order has to be former Indian dashing opener Virender Sehwag.

In world cup matches, Sehwag made 794 runs in twenty-two matches, averaging 38.31. His strike rate stands at a towering 106.17. In world cups, he has two centuries and three fifties to his name.

At his best, Sehwag was able to smash the ball to all walks of the park – that too so effortlessly.

Sehwag understands how to become a champion as he was part of the 2011 Cricket World Cup winning team.

His highest world cup score of 175 came versus Bangladesh in the first Group B match of the 2011 tournament. India comfortably won that game by eighty-seven runs. 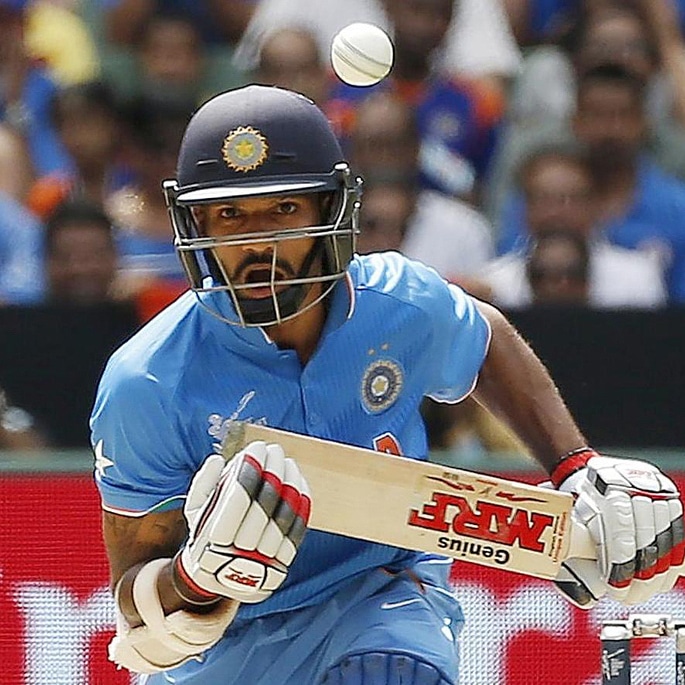 Left-hand batsman Shikhar Dhawan comes at the one down position.

Making his debut at the 2015 Cricket World Cup, Dhawan has not yet won this tournament. Whilst Shikhar is normally an opener, he can equally play in this position.

In only eight world cup matches, he has already made 412 runs. Dhawan was India’s highest run scorer in the World Cup.

His average of 51.50 and a 91.75 strike rate justifies why he makes the cut into the Indian ODI world cup team.

In that tournament, Dhawan made two centuries and one fifty. His highest score of 137 against South Africa came in the 13th match (Pool B) of the 2015 Cricket World Cup.

There is always an x-factor behind the batting of Dhawan.

Statistics suggest that once he gets going, Dhawan scores big. 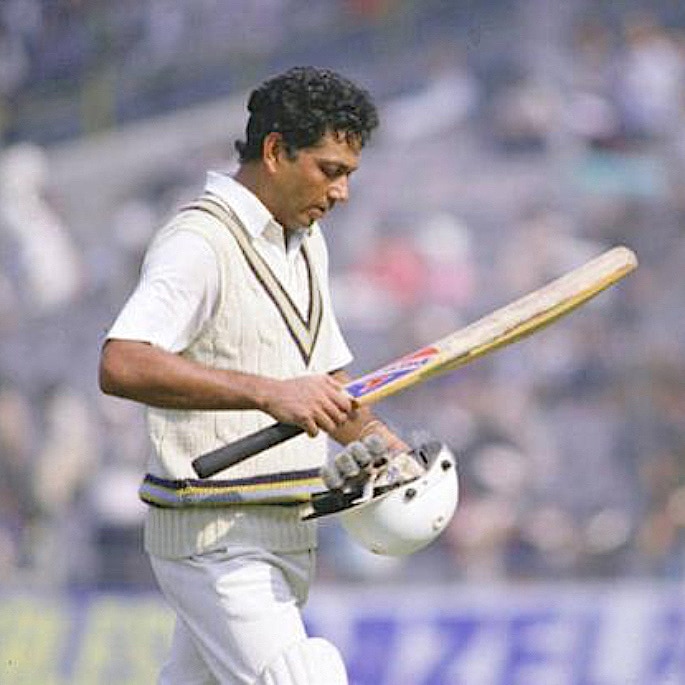 A capable all-rounder, Mohinder Amarnath is a good choice for batting at number four. Be it slow, he is the perfect man to stabilise an innings.

Having said that he was a type of player that could act as a floater, depending on the match situation. If the team got off to a flyer, he would naturally play down the order.

Despite only having one fifty in ODI world cup matches, his highest score of eighty came against the mighty West Indies in the 14th match (Group B) of the 1983 tournament.

But most people remember Amarnath for his 26-ball eighty and 3-12 in India’s sensational triumph against the West Indies in the final.

He was given the man of the match award for his all round heroics. Amarnath was like the rocking wall against the best fast bowlers of the time. 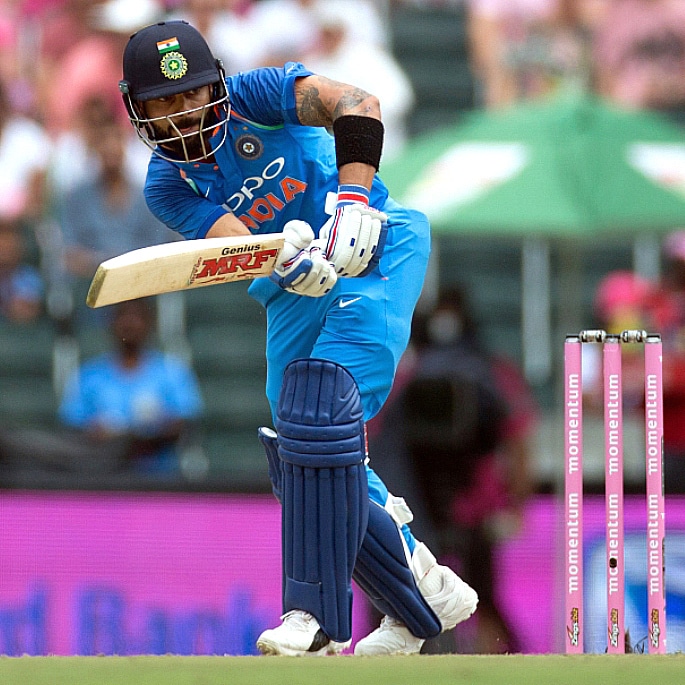 Virat Kohli, one of the greatest batsmen of the modern era is the perfect player to bat at the vital number five position.

He made an amazing debut at the 2011 Cricket World Cup, smashing an unbeaten hundred in his very first match against Bangladesh.

Throughout the 2011 Cricket World Cup campaign, Virat made handy contributions batting in the middle order. In the final of 2011, he went onto score a useful thirty-five, making a crucial eighty-five runs partnership with Gautam Gambhir (97).

With the 2011 tournament being his first world cup, Kohli certainly had proven what a big player he was going to be.

Virat also made a fantastic century (107) in the high octane clash against arch-rivals Pakistan at the 2015 Cricket World Cup.

By the end of the 2015 event, Virat made 587 runs in seventeen world cup matches. 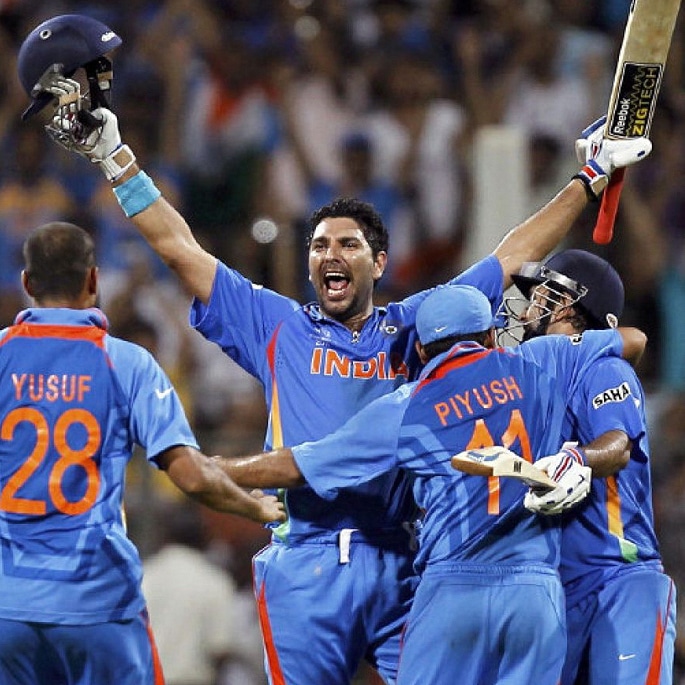 The talented Yuvraj Singh who made his debut at the 2003 Cricket World Cup, is one of the greatest ODI cricketers from India. Not only does Yuvraj have a good ODI record, but he was also a genuine match winner.

Yuvraj has scored 738 runs in twenty world cup matches, with a batting average of 52.71.

His strike rate of 90.33 is superb, considering he bats in the middle overs when wickets usually tumble.

However, battling illness, he came to the limelight during the 2011 Cricket World Cup, which India won.

His highest world cup score of 113 came at the 2011 tournament event the West Indies in the 42nd match (Pool B).

Bagging also fifteen wickets at an average of 25.13, Yuvraj received the player of the tournament. in 2011 Yuvraj is ideal for the number six position. 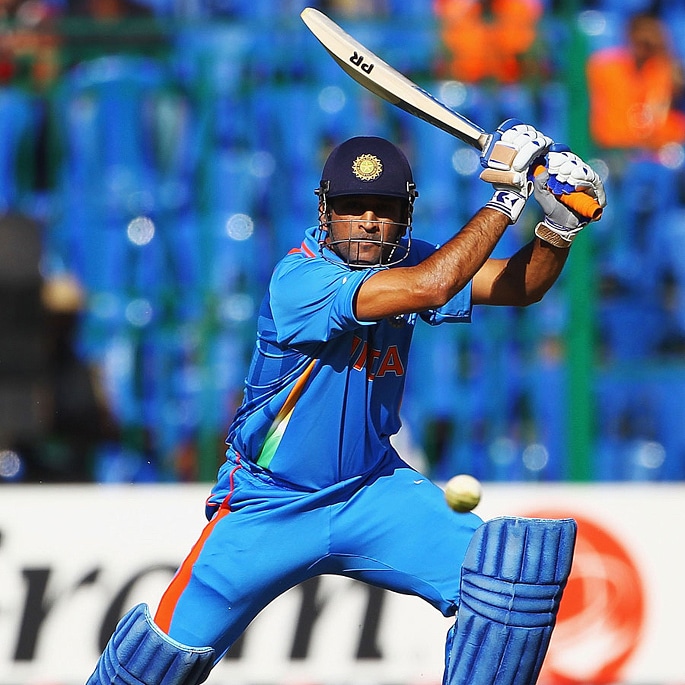 Mahendra Singh Dhoni aka MS Dhoni is the best the wicket-keeper batsman for an all-time World Cup ODI XI for India.

Following an ordinary 2007 Cricket World Cup campaign, Dhoni-led Team India to victory in the 10th edition of the event.

Despite struggling early on, Dhoni finished the tournament scoring 241 runs in nine matches. His average was 48.20 in the 2011 Cricket World Cup.

Dhoni came to the party when his team needed him the most.

Requiring 275 runs in the 2011 final against Sri Lanka, Dhoni made an unbeaten ninety-one batting at number five.

In a difficult situation, he had two key partnerships. First he had a ninety-nine runs fourth wicket partnership with Gautam Gambhir (97).

Secondly, he had a fifty-four runs match-winning partnership with Yuvraj Singh.

Dhoni’s hitting six from a helicopter shot was icing on the cake as India became world cup champions for the second time.

Not forgetting the fact that Dhoni is a great wicket keeper behind the stumps. 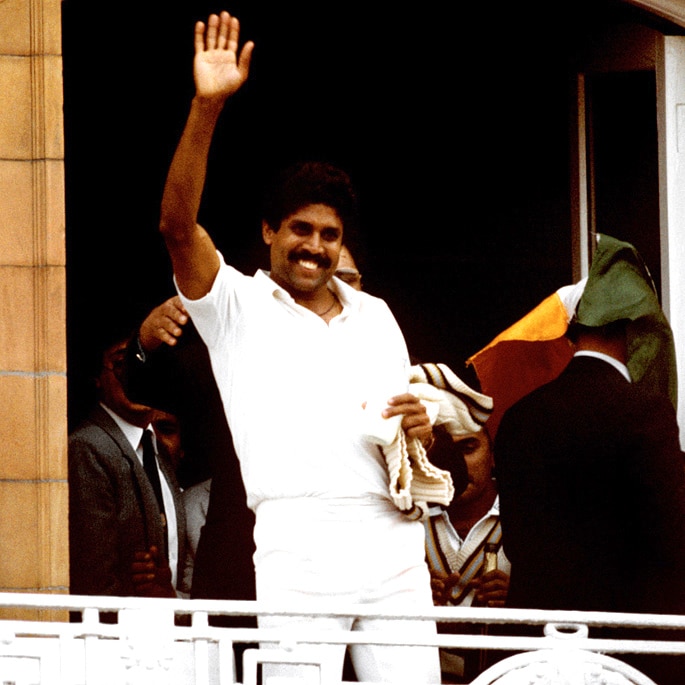 As the greatest all-rounder of India, Kapil Dev is naturally the best choice to lead an all-time ODI world cup XI.

Having made 669 runs in twenty-six world cup matches at an average of 37.16, Kapil nicely slots into number eight position.

His strike rate of 115.84 in world cups reconfirms his legendary status. He has also taken twenty-eight wickets.

Kapil definitely did play a pivotal role in the success and development of cricket in India.

Familiar as the ‘Haryana Hurricane,’ against the odds, Kapil led India to a famous win in the 1983 sixty overs ODI Cricket World Cup, defeating the West Indies by forty-three runs in the final.

This result sent shocking waves to the cricket fraternity around the world.

Kapil himself was instrumental during the world cup winning campaign. From a bowling perspective, he took twelve wickets in eight matches at an average of 20.41.

It was the during the 1983 tournament, that Kapil saved India from a shock defeat to Zimbabwe. In the 20th match (Group B) of the 1983 event, Kapil made 175, his highest score in a world cup match. 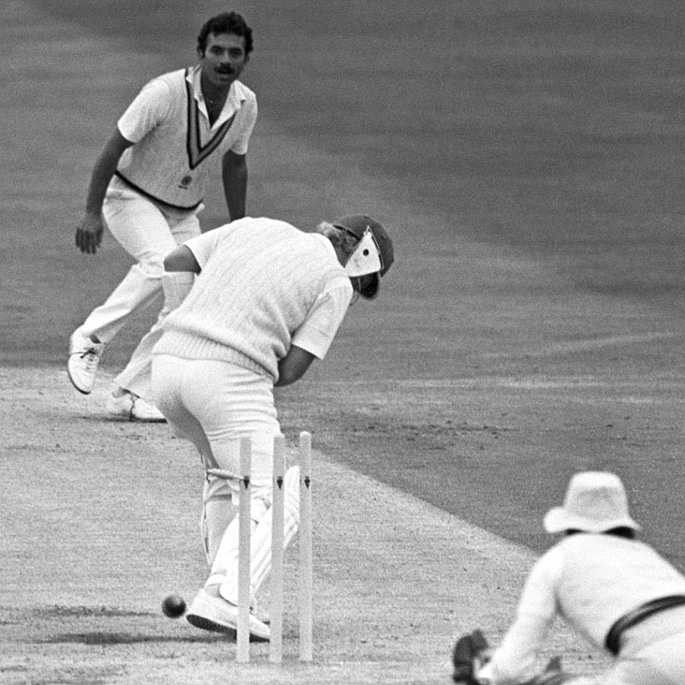 Madan Lal was a good bowling all-rounder from the 1983 triumphant team.

In the 1983 Cricket World Cup, he took seventeen wickets in eight matches, with a bowling average of 16.76.

In the all-important 1983 final, the medium pacer claimed 3-31, including the prize wickets of Sir Viv Richards (33).

Kapil Dev recalling the over which changed the match said:

“Before that particular over, two-three fours were hit off Madan. So I went to Madan asked him to take a break and come back after a few overs.

“To which Madan said ‘Kapsi you give me the ball. I have earlier dismissed Vivian Richards, I can do it once more.’

“When a player is so confident, even though I was not too keen, I thought, let him bowl another over. “They say, some things just happen for you and this happened with us.”

His best world cup bowling figures of 4-20 also came at the 1983 tournament in the 23rd match (Group B) against Australia. India won that match convincingly by 118 runs. 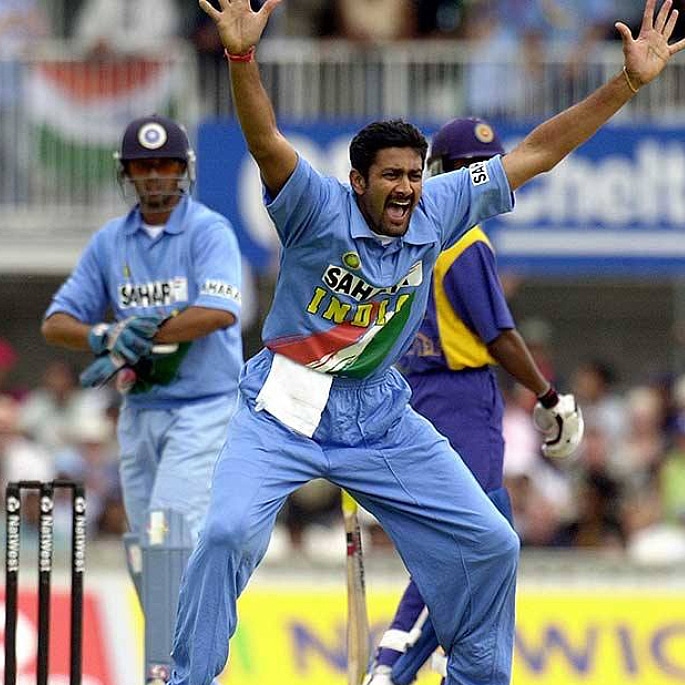 Anil Kumble is the highest wicket taker of India in ODI cricket, with 334 wickets. He is also a proven leg spinner in world cup matches.

At the 1996 Cricket World Cup in the subcontinent, he was particularly impressive.

At the 1999 Cricket World Cup, Kumble was the go-to bowler for captain Mohammed Azharuddin.

His best world cup bowling figures of 4-32 came against the Netherlands in the 7th match (Pool A) of the 2003 tournament.

With his fast leg-spinning variations, Kumble would be an asset for an all-time Inda ODI Cricket World Cup XI. 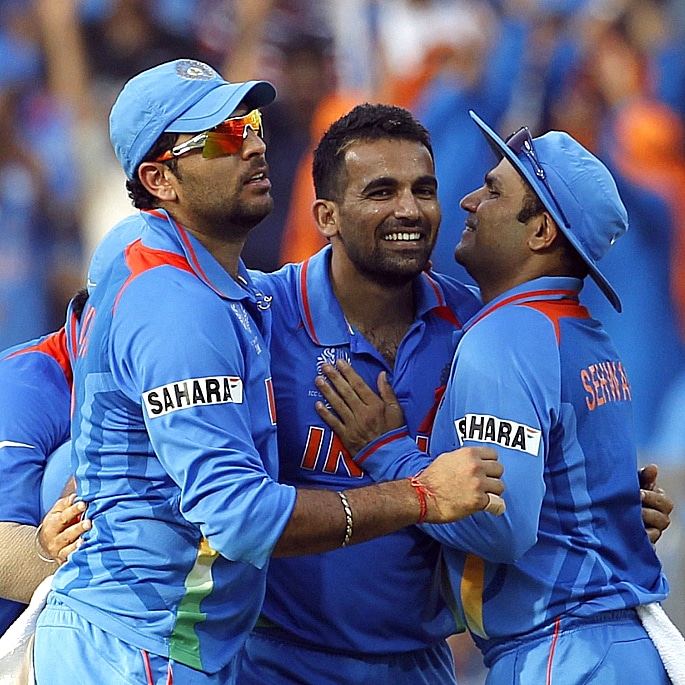 Left-arm pacer Zaheer Khan is the most successful Indian bowler in world cup cricket. In twenty-three matches, Zaheer has got forty-four wickets at a bowling average of 20.44.

At the 2003 Cricket World Cup, Zaheer demonstrated his aggression and speed.

His best bowling tally of 4-42 came versus New Zealand in the 7th match (Super Six) of the 2003 Cricket World Cup. India won that game by seven wickets.

Despite the conditions in India not being so friendly to fast bowling, Zaheer was in sublime form at the 2011 Cricket World Cup.

In nine matches of the 2011 event, Zaheer took twenty-one wickets, with a bowling average of 18.76. He was the joint highest wicket-taker along with Pakistan’s ‘Boom Boom’ Shahid Afridi.

Afridi only pipped Zaheer with a better bowling average of 12.85.

When picking the best XI, naturally there will be other great cricketers who may miss out, but can still be part of a squad.

With India being favourites for the 2019 tournament, it will be interesting to see, which other players stake a claim to be part of an all-time India ODI Cricket World Cup XI.