How much has the Indian Cricket Team Kit changed?

As Team India reveal their brand-new Indian cricket team kit, DESIblitz looks at the uniform’s long, enduring history, from the 1970s to now.

With yellow stripes and collar line, the style had a simple, but effective feel.

Since the introduction of colour clothing in cricket, the Indian cricket team kit has always favoured blue. No wonder Team India soon earned the nickname “Men in Blue”.

And on 4th May 2017, they unveiled their teams latest outfit. This marked their new official sponsor: OPPO. Placed on the front of the new shirt revealed the sponsor’s logo.

But aside from this, the new kit still contained the major components of a typical Team India outfit. With a heavy focus on blue, the outfit consisted of dark shades on its short sleeves. While the back and chest area had a lighter hue of blue.

Created ahead of this year’s Champion trophy, Team India plan to use this kit for future limited over cricket. 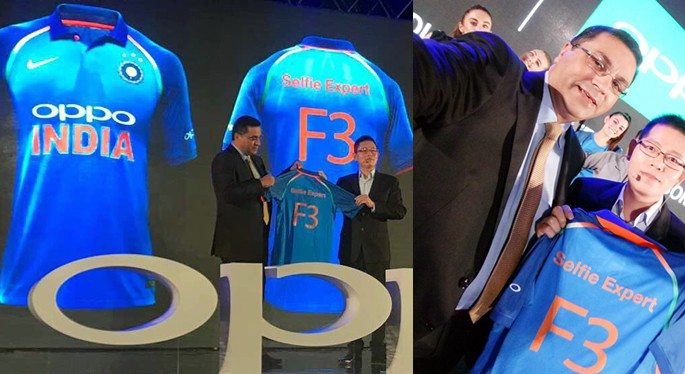 Also featuring the logos of Nike and BCCI, the new Indian cricket team jersey definitely catches your eye. But how much has the kit truly changed over the years?

DESIblitz takes you on a journey back through Team India’s history.

Since their debut as a Test-playing team in 1932, the cricket team kit mainly consisted with a full white uniform. Fitting in other teams worldwide, long white trousers and woollen jumpers became traditional attire within the sport. 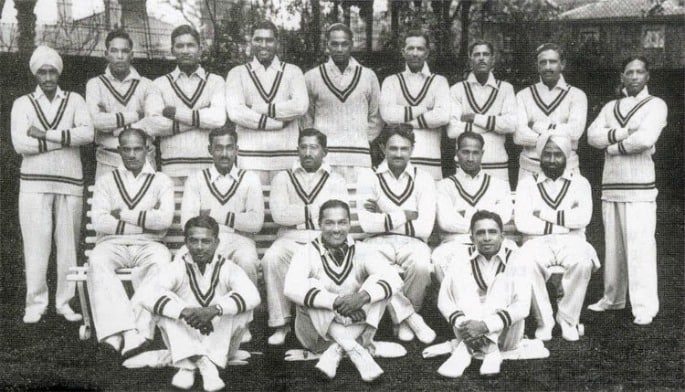 However, this underwent a change once Kerry Packer’s World Series cricket came to fruition. The cricket championship required that teams wore uniforms with a primary and secondary colour.

Therefore, in 1978, teams from around the world began to adopt colours for their outfits.

For the Indian cricket team kit, they opted for blue as their base colour. This originated from the Ashok Chakra on the country’s flag. Yellow became their secondary colour.

During the following decade of the 1980s, Team India became well-known for their kit, featuring a bright blue hue. With yellow stripes and collar line, the style had a simple, but effective feel.

You certainly couldn’t miss them on the cricket field! 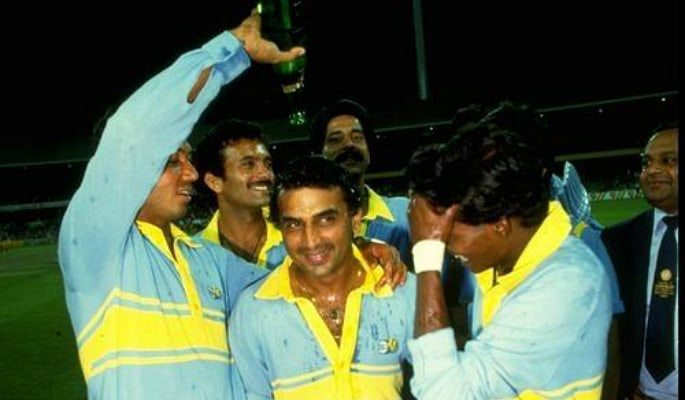 With no sponsors at the time, the Indian cricket kit only featured the team’s logo. However, once the decade entered into the 1990s, the team altered the colour scheme.

A Decade of Experimentation ~ 1990s

The Indian cricket team kit unveiled a uniform with shades of a darker blue, almost navy. Another noticeable difference involved the removal of yellow as a secondary colour.

Instead, the team opted for a set of four striped colours. A pattern of light blue, green, red and white revealed a new era for Team India.

One could arguably say that this decade contained total experimentation of the uniform. Towards the late 90s, the Indian cricket team kit went for a drastic overhaul. 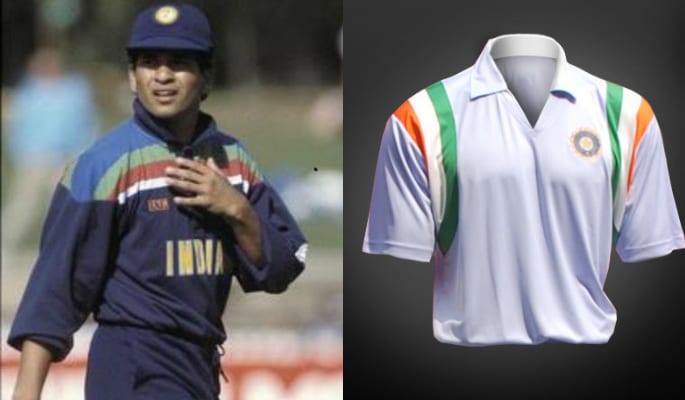 Reflecting all three colours of the Indian flag, the uniform contained a white shirt, with a set of tri-colours at the top of the sleeves.

While the team shortly returned to yellow in 1999, the tri-colours of green, white and orange has stayed ever since.

Upon entering the 2000s, Team India decided to revert back to the original blue base colour. Combining it with the tri-colours of the 1990s, the outfits reflected a true homage to India.

In this decade, the cricket team began to add extra shades of black to their uniform. For example, in the early 2000s, the kit consisted of a light blue with black patches.

Adding in the tri-colours reflecting the country’s flag and India in big yellow wording, the team seemed to be mixing their old style with new features.

However, approaching the late 2000s, Team India decided to create a simpler style with their kit. Removing the black patches, they also featured the tricolours on the right side of the shirt.

The most prominent version of the Indian cricket team kit has to be their 2011 incarnation. Worn as the team won the World Cup after a long 28-year period, the uniform comprised of a neutral blue hue and the tri-colours etching down the shirt and trousers.

In addition, with improved technology, the kit has enabled the team to feel cooler due to breathable fabric. And over the recent years, they have become great partners with their sponsors, such as Nike and Star.

And it seems since the historic 2011 win, the team has closely stuck to this design. 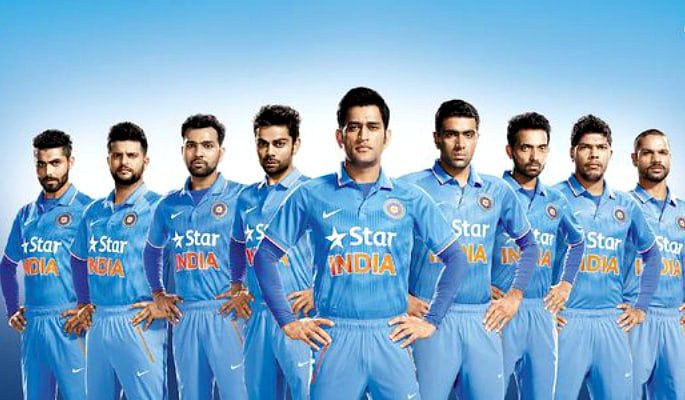 For example, when Team India unveiled their 2015 kit, they showed a similar style with bold blue colours. This certainly makes a strong statement, as they continue to strive for success in future series.

Now with the latest Indian cricket team kit unveiled, it certainly has gone through a long journey. From yellow to tri-colours, and light blue to navy, the uniform has endured a few hit and misses.

But now it seems the uniform of the 2010’s is likely to stay.