The Indian national cricket team have unveiled their brand new Nike T20 kits ahead of the upcoming ICC World Twenty20 tournament in India, 2016.

"Whenever I wear the kit, I believe I'm a hero."

The BCCI (Board of Control for Cricket in India) have released the new kits that will be worn by the Indian team for the upcoming ICC World Twenty20.

Nike, the official apparel sponsor of the BCCI, reveal their new kit for the men’s and women’s cricket teams with a photo featuring members of both teams wearing it.

The image most notably features Indian captains MS Dhoni and Mithali Raj, along with Virat Kohli, Shubhlakshmi Sharma, Ajinkya Rahane, and several others all proudly sporting the uniform.

India women’s captain, Mithali Raj, says: “When you are the senior player, you have everyone on your shoulders and you can’t let them down.

“When I don the signature blue kit, I carry it proudly, believing I will win.” 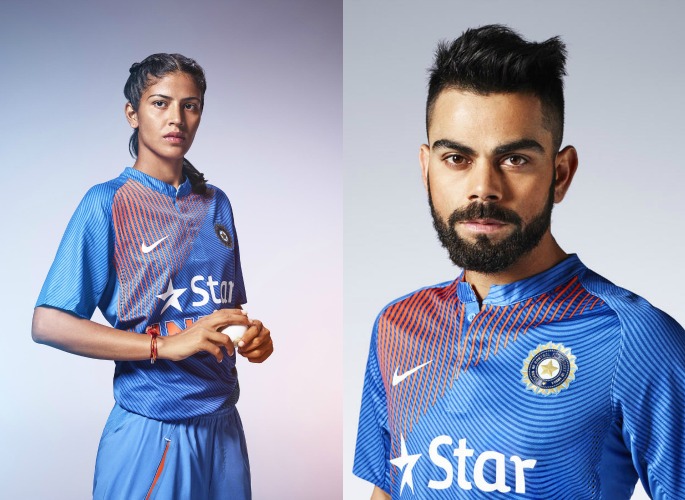 Sportswear giants Nike have designed the latest Indian kit, keeping the players’ needs on the field on the forefronts of their minds.

Blue remains to be the colour of both teams, albeit now slightly darker than the previous shade. The blue conforms to tradition and their ‘Bleed Blue’ slogan.

The colours of the Indian national flag are found near the athlete’s heart – symbolising a sense of national pride within their hearts.

A contemporary new collar has been added with hints of Asian attire – the collar style is similar to that of a bandhgala. Orange stripes appear in a triangular format across the right shoulder and the chest.

“The kits express the excitement and responsibility the players feel when representing their country.”

The trousers are four-way stretch, giving increased durability for the intensive action in T20. They also feature articulated patterning on the knee section to withstand aggressive play.

Nike explain that their latest Indian kits are stronger, drier, cooler, and 45 per cent lighter than ever before, meaning that the Indian cricketers should have more freedom of movement.

Continuing its efforts on producing sustainable products that have little impact on the environment, this Nike T20 cricket kit is made of 100 per cent recycled polyester. 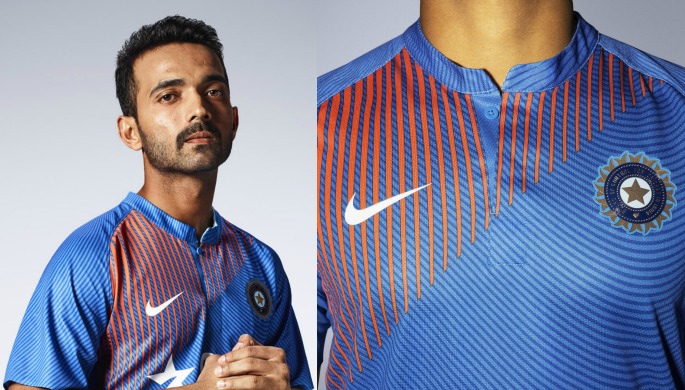 All cricketing eyes will be on India between March 8 and April 3, 2016 as the sixth edition of the tournament is being held on home Indian soil.

Supporters and viewers from across the globe will see India’s men’s and women’s teams showcase their new kits, in full, for the first time at the tournament.

Ajinkya Rahane says: “Wearing the kit, going out there and playing for my country – it’s an overwhelming feeling which is almost impossible to express in words. But whenever I wear the kit, I believe I’m a hero.”

India’s male national team begin their World T20 on March 15, 2016. They are due to face New Zealand at the Vidarbha Cricket Association Stadium in Nagpur. Play commences at 19:30 IST (14:00 GMT).

The national women’s team also begin their tournament on March 15, when they will come up against Bangladesh at Chinnaswamy, Bengaluru. Play begins at 15:30 IST (10:00 GMT).

Tune in to the ICC World Twenty20 to see the national teams debut the latest Nike T20 India team kit.

Can Rahane and co perform like the heroes that their new kits make them feel like they are?