Raghu Dixit ~ a Sensational Singer with a Folk Touch

"In the first few days of picking up a guitar, I knew I would do this for a living”

Raghu Dixit born on 11th November 1974 in Bangalore, is a successful Indian singer, songwriter and composer who has rocked the music world. He smartly combines the traditional Indian folk genre with alternative rock. It is hard to imagine that a man who became surrounded by the techniques of music at the late age of nineteen has come so far.

The musical genius did not know that a bet made with a fellow classmate during his college days would change his whole life forever. His challenge was to learn a rock song within two months! “In the first few days of picking up a guitar, I knew I would do this for a living” was his first memory he recalls.

Dixit comes from a traditional South Indian family where Western music was not the norm. He remembers sneaking away and listening to English singer songwriter Phil Collins and Wham, a British musical partnership established by vocalists George Michael and Andrew Ridgeley. 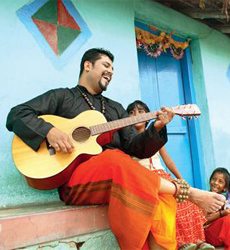 Raghu started off as an Indian Classical Dancer received a Gold medal for his masters in Microbiology.

As a scientist by profession, he gradually began working on the foundations of a new career in music. He eventually gave up his job in Europe and returned to India to create a new style of music, which he describes as “India folk rock, with world rhythms creeping in.”

He is most famous for fronting the Raghu Dixit Project, which has performed over 250 concerts across India.

All his hard work paid off when Raghu became the first artist to be signed by music directors Vishal Dadlani and Shekhar Ravjiani. They are masterminds behind the music of Bluffmaster [2005], Om Shanti Om [2007] and Ra One [2011]. His first self-titled album Raghu Dixit [2008] was released worldwide by independent record label, Vishal-Shekhar Music, in collaboration with Counter Culture Records.

His album shot its way to Number 1 on the iTunes World Music Charts in the UK and received a raving review from M Magazine who wrote:

“Raghupathy Dixit shows the world that originality matters at the end of the day, even if that means going against the flow of the river of mainstream Rock Music.” 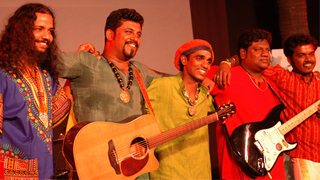 After establishing himself within the music industry he ventured towards imprinting his creative brilliance into the world of Indian cinema, starting with the Kannada film industry.

He recorded his first musical composition for the Kannada film Psycho [2008], which received mixed reviews. However, this was just the beginning as he went on to produce music for two other Kannada movies.

Working alongside his band and after making his mark in the Kannada film industry, this paved the way for Bollywood to be hit with some Dixit magic.

Raghu fans got a taste of his delightful music with a song in Quick Gun Murugan [2009], a Bollywood comedy film, which was declared a critically acclaimed hit at The Indian Film Festival held in Los Angeles. He received his first big break when he worked on Mujhse Fraaandship Karoge [2011], a film based on the social networking site Facebook and was produced by Y-Films, a company part of Yash Raj Films.

Watch Raghu perform one of his incredible songs unplugged exclusively for DESIblitz.com:

His catalogue extends into the world of theatre and contemporary dance. He has composed and produced music for Indian contemporary dance group Nritarutya. Girnish Karnad’s Hayavadana for TopCast and Black Coffee’s Body Catcher are amongst his popular compositions for theatre.

The Raghu Dixit Project reached new heights on an international scope; in the UK alone Dixit and his band have made their mark on the alternative rock music scene and received the most prestigious musical opportunity. This was the chance to perform at the UK’s most famous festival Glastonbury 2011. 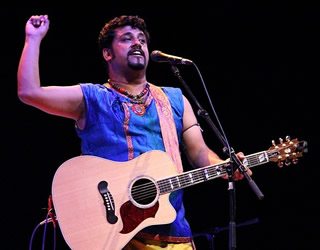 Raghu stated: “When we got the call to play at Glastonbury, and not just at any stage, but the super cool ‘John Peel Stage,’ we were overjoyed. But our management in the UK did not have enough, they used that as leverage and booked us for 4 other stage performances, one audio recording and 2 TV appearances/interviews.”

His performances have been broadcast around the UK through various appearances on BBC Television and Radio. He has performed LIVE on the BBC Asian Network, The Andrew Marr Show to perform ‘Waiting for a Miracle,’ and the Jools Holland show, which led to one of his tracks immediately becoming a download hit.

Throughout his career there have been many highlights for Raghu Dixit. One of his most honourable achievements was the opportunity to perform in front of Her Majesty The Queen during her Diamond Jubilee celebrations in 2012.

With sell-out tours across the world and travelling around India frequently, Raghu Dixit and his band are a force to be reckoned with. It can be predicted that bigger and better opportunities are awaiting him. There is no doubt that he is one of India’s biggest exports.

Arun is a creative person who lives and breathes the world of Fashion, Bollywood and Music. He enjoys spending time with family and friends and loves a bit of banter. His life motto is: "You only get out of life what you put into it."
Sunny Jain and his Red Baraat Band
Ash Mukherjee ~ a Dancer like No Other