DESIblitz chats to the Red Baraat Band, an eight-piece band who are the ultimate expression of the Bhangra, Funk, Jazz and Latin sound.

“The real challenge comes from creatively putting things together while being sensitive to what we’re playing.”

The Red Baraat band is an eight-piece group of musicians becoming rapidly synonymous with fusing together music from around the world to create a sound that is new, exciting and unlike anything you’ve ever heard before.

The band has been largely heralded as pioneers of a new genre of music, and support for them has been overwhelming with a growing fan-base. They have been lauded by ‘Signal To Noise’ magazine for bringing a new edge in this “21st Century world of cross-pollinating musical traditions.” 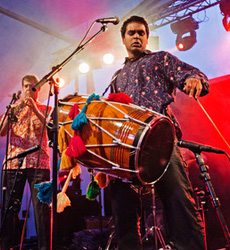 Sunny Jain was born to Punjabi immigrant parents and raised in Rochester, New York, which is famous for being the cultural ‘melting-pot’ of the world. He first started playing tabla and experimenting with rhythms at the age of four. He said: “I always knew that I wanted to play drums.”

This ‘bug’ led to him taking up the drums at the tender age of ten, and later falling head over heels in love with the world of Jazz music. It was a completely new musical world to the point where he read Jazz studies at Rutgers University in New Jersey.

It was this cosmopolitan setting and seeing Indian brass bands marching down the streets of New Delhi in a riot of percussion and colour that served as the first source of inspiration during the creation of Red Baraat in 2008.

Sunny Jain has led a varied and musically rich life, working on some interesting projects. In 2010 for the project Taboo he worked alongside talented musicians to address controversial subjects such as gender inequality and violence against women.

He also plays the drumset and dhol for sufi-rock group Junoon and has worked with the band Asphalt Orchestra, bringing the atmosphere of a concert hall to the streets. 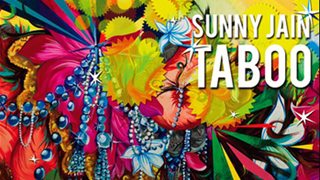 His accolades are many; in 2002, Jain toured West Africa as named Jazz Ambassador by the US Department of State. Jain was also a recipient of the Arts International Award in both 2003 and 2005.

Amongst his many achievements, he played dhol in the musical show Bombay Dreams [2004] and has even made his Hollywood debut thanks to the dhol in the film Accidental Husband [2008] starring Uma Thurman and Colin Firth. He has also shown a talent for teaching, having published two instructional drum books.

He has found a lot in life to inspire him, including the many facets of music found in modern India today as well as the more timeless classical forms such as ghazal.

But one does not hear only the sounds of India in Red Baraat’s music. With a group of men from different countries of origin, including Japan and Brazil, Red Baraat delivers an enchanting, hypnotic twist of Latin and Go-Go music, lending them an accessibility rarely seen before.

“It sounds a bit like a circus talking about our sound,” Jain laughs, “but we like to leave the genre up to the listener. The words to describe it are up to the individual.” Tomas Fujiwara perhaps puts it best simply saying: “It’s just the music of Red Baraat.”

DESIblitz caught up with the Red Baraat guys and asked them more about their music and sound:

Red Baraat owes its creation to Sunny Jain’s own wedding when he invited a group of friends he’d made over the years to play music at his ‘baraat.’ The rest is history as the group started receiving offers to perform at weddings – connecting friends of friends.

It was in 2007 when Jain realised that he had conceived something the musical scene hadn’t heard before. And so he began the long journey of selecting the right musicians who would lend depth to the sound he had envisioned in his mind. Explaining this he said: 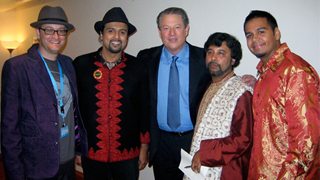 Trying to find the right mix of instruments, finding the correct balance so each instrument would be heard without any of them being overpowered by the sounds of another was a challenge.

Thus he settled on the unusual mix of five horns, a sousaphone, the dhol, a drum-set and percussion. Jain says: “The real challenge comes from creatively putting things together while being sensitive to what we’re playing.”

Despite his achievements and success, Jain’s musical journey has not always been an easy one, though it may seem hard to believe as he and his colleagues move from strength to strength.

Red Baraat is unique in that they have created a space that does not limit itself to any one culture. This is quite evident by the men who have joined Jain to create the perfect symbol of living in a multi-cultural world.

Canadian-born Rohin Khemani works percussion along with Jain and is based in New York City and started his career in music from the age of six as a classically trained violinist. He graduated from Berklee College of Music in Boston before travelling between America, India and Japan. 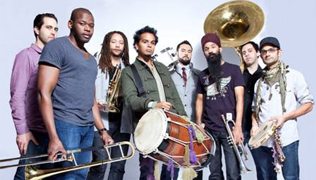 Alex Hamlin began studying the saxophone when he was ten and performs on the baritone sax for Red Baraat. He has put on shows in New York City and throughout many parts of the world.

Born of Japanese descent, based in Brooklyn, Tomas Fujiwara is renowned in the Jazz scene. He has had the honour of sharing stage-space with ‘The Thirteenth Assembly’ and ‘Amir ElSaffar.’

Sonny Singh is one of the five horn players in Red Baraat. He has recorded and performed as a vocalist, a trumpet player and dhol player.

DESIBlitz can’t wait to hear the new sounds these men will produce together and individually in their own respective projects. We wish Sunny Jain and his team the very best of luck in the future.

Faisal has creative experience in the fusion of media and communication and research which increase awareness of global issues in post-conflict, emerging and democratic societies. His life motto is: "persevere, for success is near..."
Late Ravi Shankar wins Double Grammy
Raghu Dixit ~ a Sensational Singer with a Folk Touch