Sunny Leone is enjoying a beach vacation in the Maldives with her family. The star wore a red one-piece swimsuit in her latest post.

Sunny Leone recently jetted off to the Maldives with her husband, Daniel Weber.

The star has been posting pictures and videos from her time there.

She is also providing her fans with serious travel and beach fashion goals.

Her latest video featuring her having the best time dressed in a hot red swimsuit supports this claim.

On March 25, 2022, Sunny posted a video of herself running on a private beach surrounded by clear blue waters.

The clip shows waves crashing around her as she waves and blows kisses at the camera.

The star posted the scenic clip with the caption: “Running to you baby!! Private island just for us.”

She chose a red one-piece swimsuit for the video.

Sunny Leone chose a hot red monokini for enjoying a day at the private beach in the Maldives.

The Anamika actress’ swimsuit features halter straps, a plunging sweetheart neckline, a gathered design on the front, a keyhole and midriff-baring cut-out, high-rise leg cuts, and a fitted silhouette. 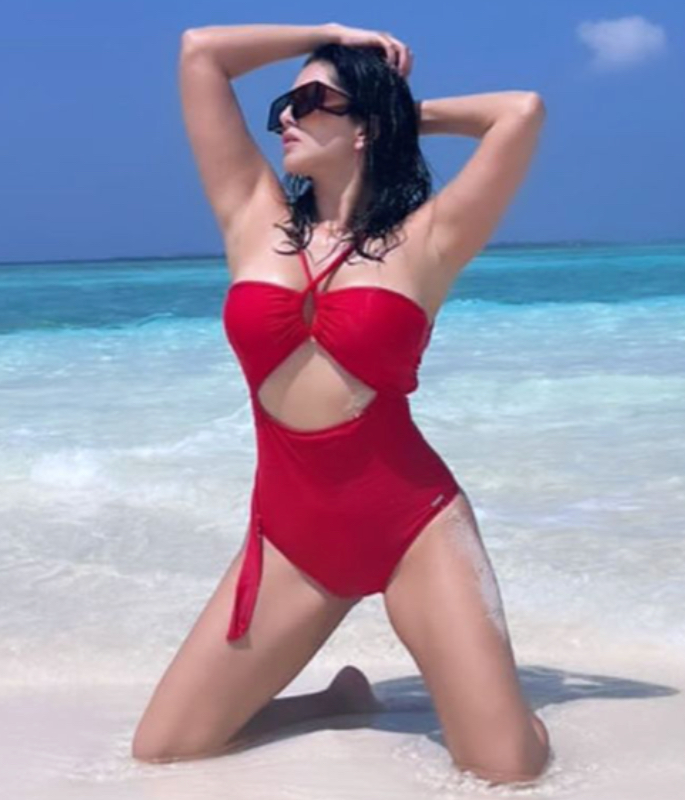 She wore the one-piece with open locks and quirky tinted sunglasses.

Earlier, Sunny had also posted a picture and a video of herself in the same swimsuit.

The photo shows the star sitting on Daniel’s shoulders and making a heart with her hands.

In the caption, Sunny wrote: “On an island stuck with this one!! Not so bad!! Lol.”

The video is a compilation of several pictures of the 40-year-old star posing on the white sand beach in the red monokini.

In the caption, the actress asked her fans: “Which is your fav shot! I’ll post my fav later.”

Earlier, Sunny had posted snippets from her time in the Maldives, featuring the star enjoying a water slide in the resort, deep water diving and chilling by the pool.

She wore a trendy monokini, shorts and crop top sets during the vacation.

In other news, Sunny has been denied entry to Bangladesh after her work permit was cancelled.

She was set to visit Dhaka to shoot her film Soldier.

While the reason behind the cancellation has not been disclosed, there is speculation that some Islamic groups did not want the actress to enter Bangladesh.

They reportedly threatened to protest if Sunny Leone entered the country.

This is not the first time that Sunny Leone has been banned from entering Bangladesh.

In 2015, she was denied entry to the country and prevented from attending a cultural event as several Islamic groups staged protests against her which ultimately led to the cancellation of her trip.

Ravinder is a Journalism BA graduate. She has a strong passion for all things fashion, beauty, and lifestyle. She also likes to watch films, read books and travel.
Priyanka Chopra dazzles in embroidered Black Saree
Nadia Hussain defends herself amidst ‘Elitism’ Allegation