After its recent launch, Bollywood’s beautiful Esha Gupta has posted stunning pictures of her modelling the new Arsenal FC away kit for the 2017/18 season.

“I'm in love with Arsenal’s new away kit, Esha Gupta looks great in it."

Despite 2017 being a busy year of filming for Esha Gupta, the actress still fit in a trip to London.

Following the release of Arsenal’s new 2017/18 away kit, Gupta posted a picture posing outside their Emirates Stadium home.

And just moments later, Esha Gupta posted two more striking pictures of her posing in her side’s new away tops.

After posting the pictures to her Instagram account, her fans went crazy. Abhi says: “I’m so happy to see such a charming Goonerette from Bollywood.”

And Roop adds: “I am in love with Arsenal’s new away kit for the 2017/18 season, and Esha Gupta looks great in it. This season could be ours.” 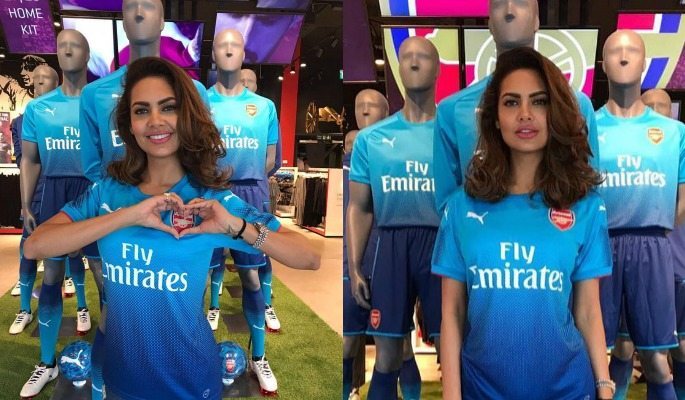 Gupta, from New Delhi, India, is currently preparing for the upcoming release of Baadshaho.

She plays a starring role alongside Ajay Devgn and Emraan Hashmi in Milan Lutharia’s film.

The luscious Sunny Leone also makes a special appearance in the movie, for the saucy track, ‘Piya More’. Follow the link to see how Sunny and Emraan unite to create a sexy music video which is going viral.

Baadshaho is scheduled for a worldwide release on September 1, 2017.

Releasing slightly sooner, though, is Shahrukh Khan’s latest rom-com movie. Jab Harry Met Sejal is set for its own worldwide release on August 4.

The movie will also introduce the American DJ and Producer, Diplo, to Bollywood. Diplo and Shahrukh came together to create the hip new song ‘Phurr’ which will be a part of the movie. 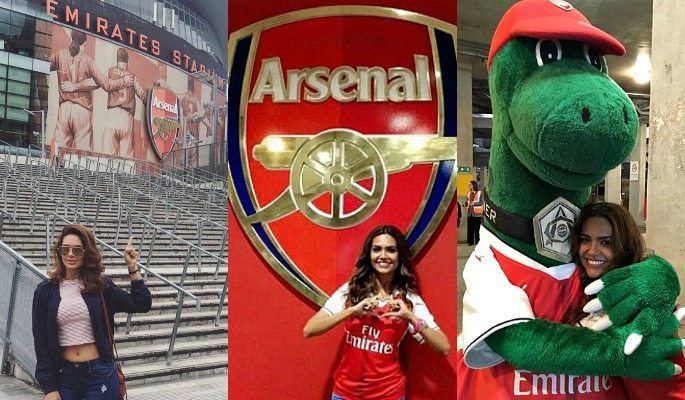 Arsenal are set to wear their new two-tone away kit for the first time in the 2017 Emirates Cup.

They face Benfica today in their first match of the tournament, before playing Sevilla on July 30. RB Leipzig completes the four team competition, although Arsenal will not play against the German side.

Arsenal’s new away kit for the 2017/18 season is a light and bright blue colour at the shoulders and chest. It then fades into a darker navy blue colour further down the shirt.

Dark blue shorts, which match the bottom of the tops, and a pair of two-tone socks completes the kit.

After the Emirates Cup, Arsenal have the chance to win the first trophy of the 2017/18 season. They will face city-rivals, Chelsea, at Wembley in the Community Shield on August 6.

And Esha Gupta may well be one of the 90’000 fans attending the huge season-opening clash.

The beautiful Indian actress and model makes no secret of her love and support for Arsenal FC.

Esha Gupta regularly posts Arsenal related photos and videos to her social media pages. And you can see for yourself by following the links to her official Instagram and Twitter pages.