Referee Sukhbir Singh gets abuse at Chelsea vs Inter Game

Sukhbir Singh was the focus of some disgusting abuse on Twitter while he was refereeing the ICC match between Chelsea and Inter Milan on July 29, 2017.

Some of the offensive comments still remain on Twitter.

Racism is once again at the front of football after the referee, Sukhbir Singh, was the focus of Twitter abuse.

While refereeing a pre-season friendly on July 29, 2017, some fans posted awful racist comments about him on social media.

The abusive posts came after he made several contentious decisions in the match between Chelsea FC and Inter Milan.

Football’s equality group, Kick It Out, are now investigating the online abuse directed towards the referee, Sukhbir Singh.

But is that enough? Or should more work be going into preventing these instances from happening to begin with in a sport which is already severely lacking Asian representation?

And could Chelsea do more considering it is the second high-profile case of racial abuse their fans have been in? 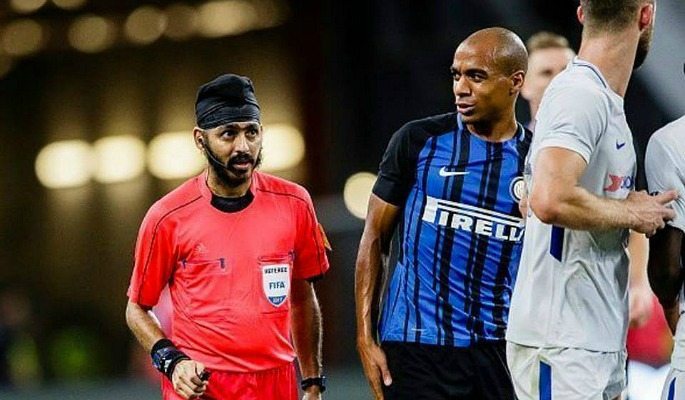 Both Chelsea and Inter Milan were a part of the 2017 International Champions Cup which concluded on July 30, 2017.

Featuring some of the world’s biggest teams, the pre-season competition this year took place in China, Singapore, and the USA.

Sukhbir Singh is a FIFA referee of Indian descent who lives and officiates football matches in Singapore. The 33-year-old is one of Singapore’s top referees.

And he was chosen to referee the game between Chelsea and Inter at the Singapore National Stadium on July 29.

Singh, however, wrongly awarded a penalty against Chelsea in the last minute of the first-half.

Replays show that the Blues defender, Cesar Azpilicueta, actually wins the ball in his challenge. But Sukhbir Singh gave the penalty, leading to the beginning of a barrage of online abuse towards him.

Chelsea fans became further outraged when Michy Batshuayi saw a goal incorrectly ruled out for offside in the final minutes. During all this action, numerous tweets were calling the referee a ‘p**i’, and some of which remain on Twitter today. 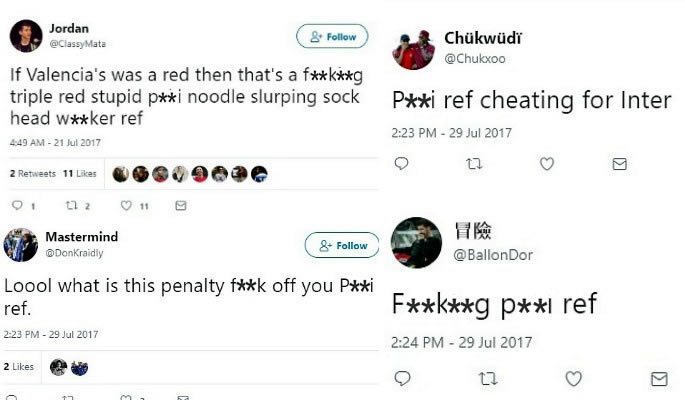 However, by appointing a referee who averages a whopping 3.3 yellow cards per game, and a red card every three matches, action was sure to come.

Even in his last competitive S-League game, Singh awarded a penalty and gave out 6 yellow cards.

Sukhbir Singh has been an International referee since 2009, but it’s not been short of controversy.

In December 2011, Singh was the referee for the final of the SAFF Championship between India and Afghanistan.

With the game tied at 0-0 after 70 minutes, Singh rightfully awarded India a penalty after a foul. He then, however, also sent off the Afghan goalkeeper for his protests.

Afghanistan went on to lose the final 4-0 before their coach made some controversial comments about the referee.

Mohammad Yusuf Kargar claimed the referee had bias towards India due to his religious background. He said:

“India played well but I have to say that the referee was partial to them. I don’t know whether he is a Sikh or a Hindu but he supported them [India].”

Furious Afghanistan fans also took their anger on Sukhbir Singh to social media. Several Facebook groups were made against the referee, and feature some hostile comments about him. 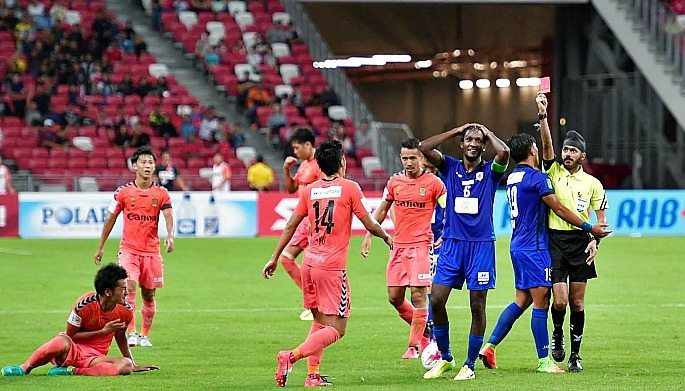 More recently, in February 2017, the referee gave out three red cards in the season-opening fixture of the Hyundai S-League.

Madhu Mohana took to social media after his sending off in the game, but his comments about the referee led to him receiving a suspended fine.

What does this mean for football?

It is alarming that such ignorant attitudes remain in 2017. To abuse a referee for human error is wrong, but to bring race and religion into it is truly shocking.

This is now the second time that Chelsea fans have been in a high-profile racial abuse incident. You can see what happened the first time, here.

The club simply must do more to address the ideals of this small portion of their fans. There is already a massive shortage of Asians in football, and incidents of racism will do nothing to move the beautiful game forward.

Follow the link if you want to find out more about the lack of British Asians in football, and see what is being done to try and change it.

Keiran is a passionate English graduate with a love for all things sport. He enjoys time with his two dogs, listening to Bhangra and R&B music, and playing football. "You forget what you want to remember, and you remember what you want to forget."
Bollywood’s Esha Gupta models Arsenal 2017-18 Away Kit
Fantasy Football Tips and Tricks for 2017/18