Sangram Chougule is an incredible Indian bodybuilder. Mr India and Mr Universe are examples of his achievements. DESIbltz met up with him to find out more.

"In 2012, I won Mr Universe in Bangkok. So that was the biggest moment in my bodybuilding life."

Sangram Chougule is an incredible bodybuilder athlete from India. With a physique that speaks volumes, he is a man who has built himself with ambition and hard work.

DESIblitz met up with him at BodyPower Expo UK, for an exclusive gupshup about his career, his motivations, his diet and fantastic achievements such as Mr India and Mr Universe.

Born on 5th November 1979, Sangram Chougule originates from the village Korpade in Karveer, a tehsil of Kolhapur district in Maharashtra, India.

His parents were school teachers with a basic income who provided for him, his two brothers and sister.

During his college time, Sangram started married life when he met his wife, Miss Snehal a Fashion Designer from Chinchwad. To where he relocated.

Sangram Chougule started his bodybuilding career while he was heading for a profession in engineering. He says:

“Basically, I’m an engineer and I had to switch my field to this fitness field because this is my passion and I love to be the fitness freak.”

Encouraged by his fitness guru, Sangram Chougule began to pursue bodybuilding in early 2000’s. His muscles began to develop and he started participating in competitions without any specific goals.

He won the title ‘The Great Maratha Shree’ and many other prizes. He says:

“By 2006, I won my first district competition and till now I was also aimless. But when I won Mr India in 2010, that time I decided to be a bodybuilder.” 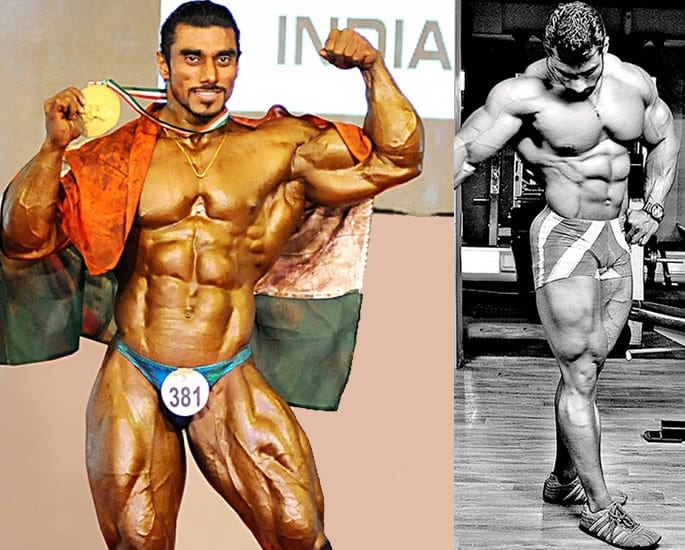 Financially, Sangram struggled to maintain a career in bodybuilding as his expenses were much higher than his income. To help, he was supported by M. Azam Pansare and Raju Misal to continue.

Working hard and building his winning body, the next stop for Sangram was Bangkok, Thailand for the Mr Universe title. Remembering this special competition, he says:

“In 2012, I won Mr Universe in Bangkok. So that was the biggest moment in my bodybuilding life.”

“When they announced Sangram Chougule from India won the gold medal and our flag come up. That was moment was a memorable moment for me.” 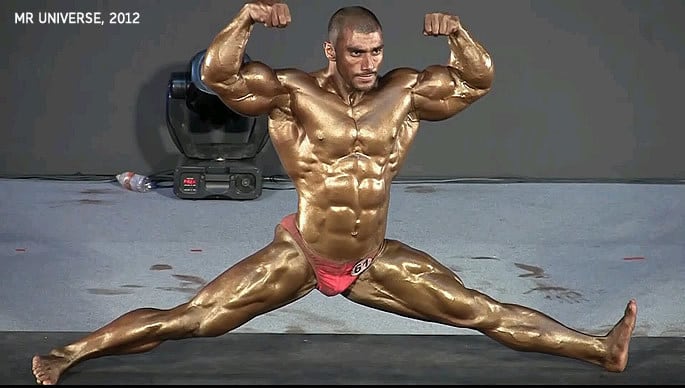 Tragically, following this time, Sangram Chougule had an accident. This led him to question whether he could continue in bodybuilding. But this resulted in him going into business.

“I started my first gym. ‘Physc’ gym. Physc is my brand and I have eight gyms in the four to five years. I have a very nice client base but all my gyms are in partnership because I have to roam around the world.”

Subsequently, Sangram won many competitions such as the South Asia Championship and Satish Sugar Classic Championship at Belgaon. And appears at major bodybuilding events globally.

As part of this great journey, his biggest inspirations in bodybuilding are Hollywood star ”Arnold”  – Arnold Schwarzenegger, who Sangram says was the first real bodybuilder to bring real muscles onto the silver screen with films like Terminator and Predator. 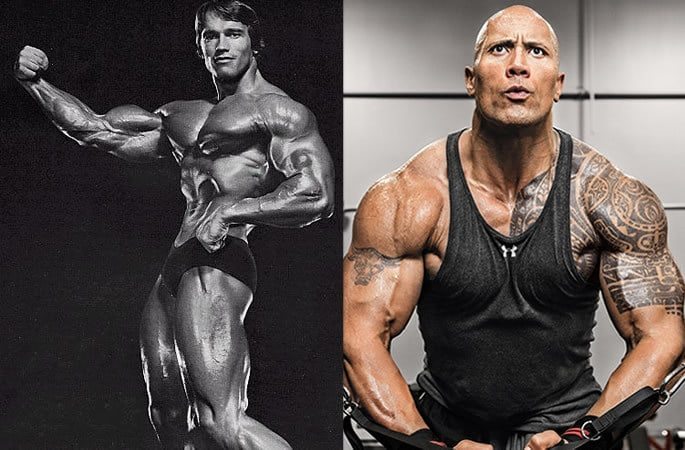 More recently, he is inspired by Dwayne Johnson Johnson, ‘The Rock’, who Sangram says is a “sportsperson, a social worker, a promoter. Like he is everyone. So, just want to be like him. Let’s see.” 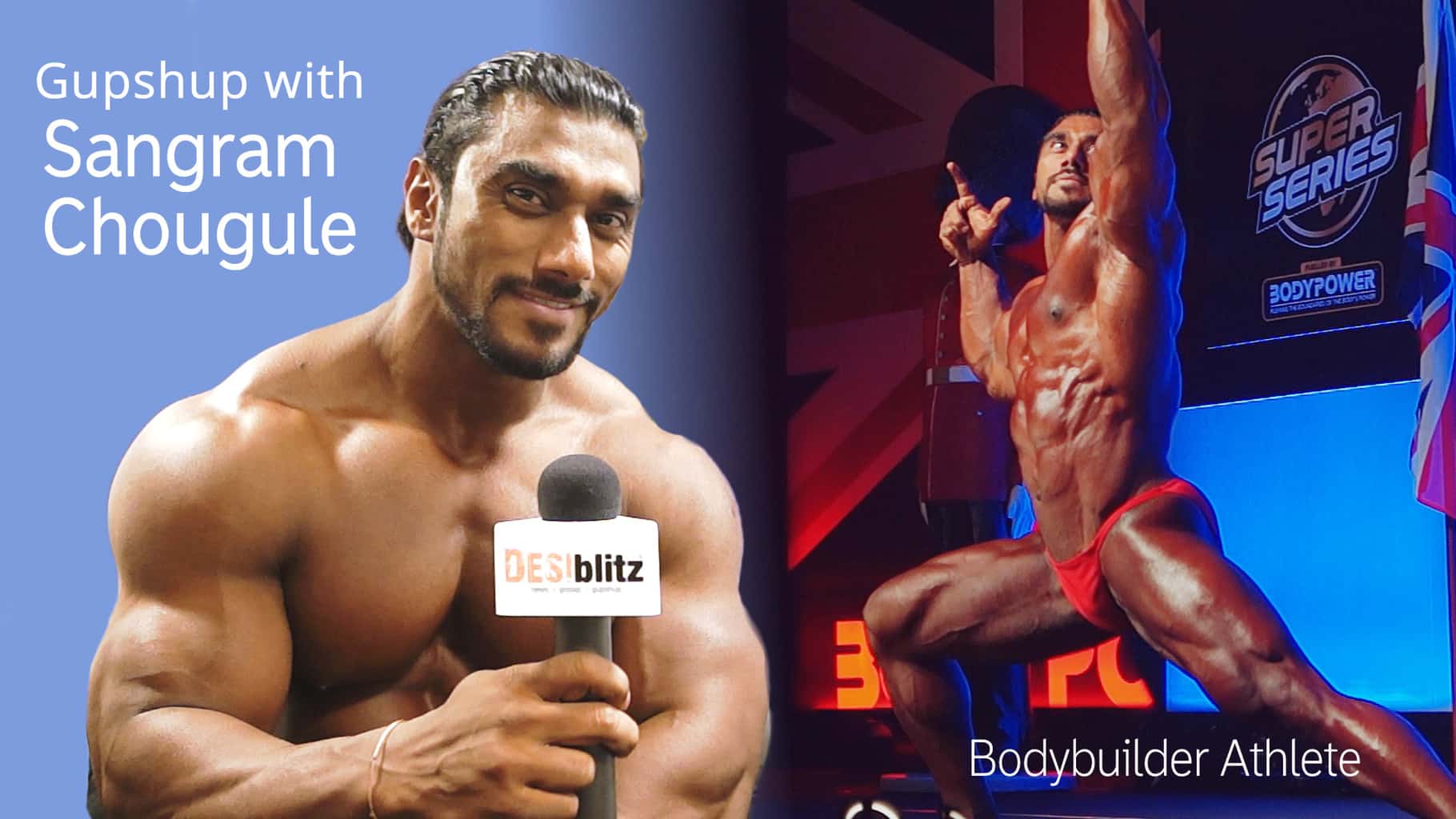 Food and diet play a very important role when it comes to fitness. For bodybuilding, it plays a huge role in helping ensure athletes get the right amount of protein, carbohydrates and fat in their body in order to build the muscles they crave for.

When asked about what Sangram Chougule eats to maintain such a fantastic physique. He says:

“My diet is very simple. We can’t eat fat, we can’t eat sweet and we can’t eat salty food. I eat boiled chicken, boiled rice and some vegetables with supplements.”

With protein being a major player in a bodybuilding regime, we asked Sangram what is his typical intake:

“If I have competitions, I have to switch maximum towards my protein. So, the protein will be 300-350 grammes per day. I have to divide it into my six to seven meals.” 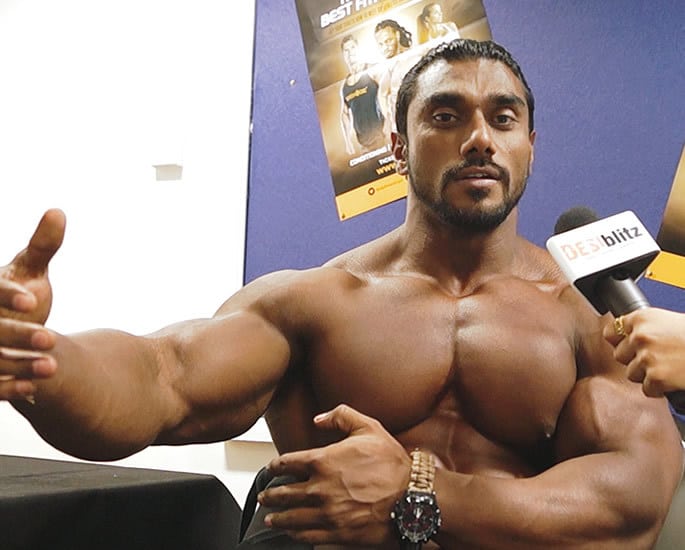 Carbohydrates are needed for energy and Sangram says:

“I never put carbs in each and every meal. So, whenever I feel I am dragging my energy that time I add rice, some potatoes, some sweet potatoes or some supplements that give me carbohydrates.”

Supplements are a well-known addition to the diet of most bodybuilders. So, we quizzed Sangram about what kind of supplements are right for you.

“Everybody has their different body type and metabolic rate. Many things are different because there is no other person like you in the world. You have to check the things like what is suit for you.”

“Authentication is very important. You should authenticate the product. Is it pure, is it original or is it fake.”

“It does not depend on the company, it depends on the quality of the product.”

Every bodybuilder has a regime with different days for specific muscles. We wanted ot know what was Sangram Chougule’s favourite exercise. He says:

“Actually, there is no favourite exercise because I’m a body builder and I have to develop each and every muscle in symmetry.” 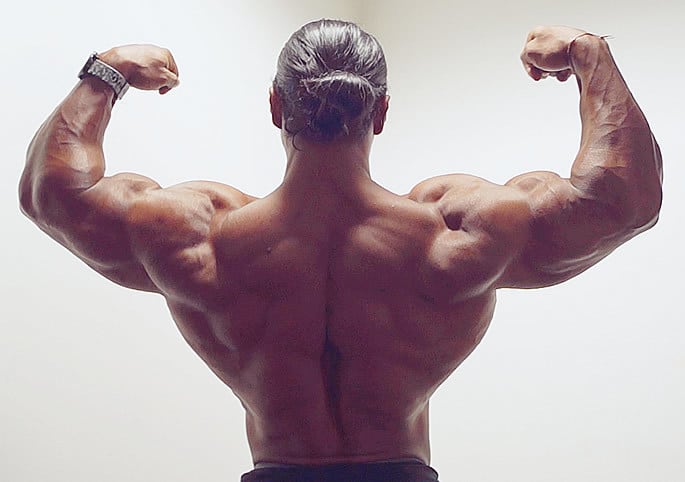 “But back muscle is my favourite muscle. I love to work out on back. Because I can do it anywhere. I do not need any machine for back. It is the biggest muscle in your body. If you have good back you can be king on the stage.”

When asked about training to do exercises like Pull-Ups, Sangram explains there is a process to achieving these exercises and says:

“It depends upon your core. First, workout on your core, that’s is abs. If your core muscle is strong, then develop the strength with push-ups to give you strength in your biceps, triceps and shoulders. After that, you can try for pull ups.”

Using machines, free weights and building strength and improving yourself is the way to do it he adds, and “after developing your strength, practice makes it perfect.”

And what about cardio?

“I hate cardio! Because I just don’t like it!”

“But during competitions, I have to do the cardio. In strength exercise, you are burning your fat from a particular muscle but with cardio, it burns fat from all over your body.”

“Cardio is for your heart and respiratory system. If your heart is strong then you will develop the strength in the whole of your body.”

When it comes to strength training we were curious about repetitions versus weight. Which is better? More reps less weight or more weight and lower reps? Sangram replies:

“If you want to gain muscles size, you have to lift heavy weights as much as you can lift. You have to cut down the repetitions and gradually increase the weight.”

However, when you are competing, like Sangram, he says:

“I have to maintain the repetitions and weight also. So at that time, my repetitions are about 12 to 15 but when I am gaining muscle it is around 8 to 10.” 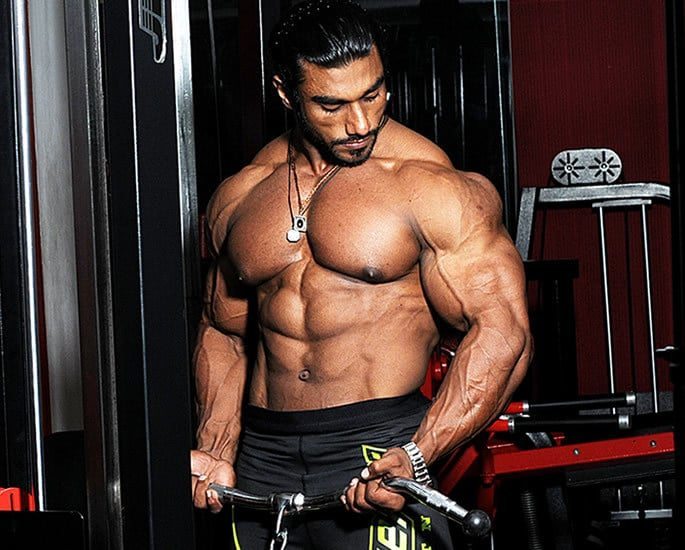 For strength training, there are two kinds of training you can do, machine and free- weights. Sangram says:

“For beginners machines are very important because they are using a particular muscle in that particular area.”

“For free weights, your core has to be very strong because it gives you stability.”

“To get the stability you have to know the techniques and forms of the workout. To get that technique, beginners should first try machines and then move to free weights.”

Therefore, to get the best regime for fitness, Sangram says “make a combination of free weights, strength and cardio.” 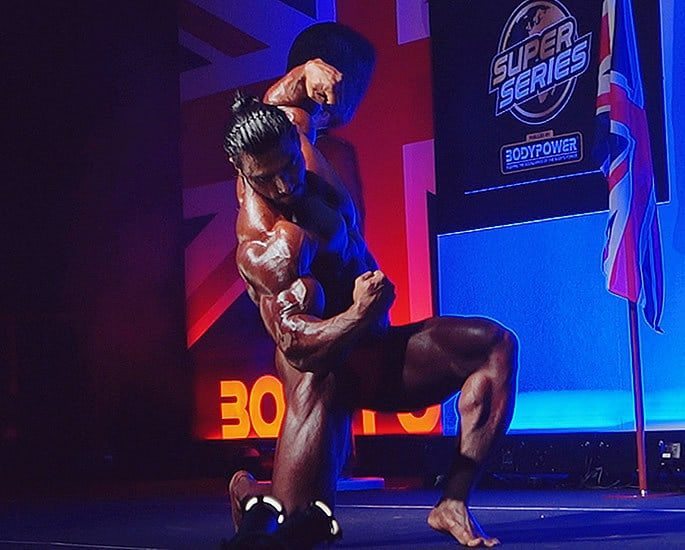 Sangram Chougule has the body to prove that his methods work. He is constantly working hard even now to maintain his physique because as a bodybuilder he has to attend events and functions and therefore, must be in constant shape.

We had a fantastic time meeting this man of strength from India and learning about his journey, his challenges and how he has achieved his impressive status as a bodybuilder.

DESIblitz knows we will see more of Sangram Chougule in the future and we wish him all the best with his projects and challenges ahead!

Special Thanks to BodyPower Expo 2017