DESIblitz looks at the life of Pinky Lilani OBE and how her passion for empowering women combined with her love for cooking Indian cuisine led her to become the inspirational Asian woman extraordinaire she is today.

"I’m very self-motivated so when I want to do something I just find ways to do it."

Pinky came from a privileged Muslim family. Her father worked for a large British company and her mother was a homemaker and socialite. Their home was a regular venue for dinner parties when Pinky was growing up. Having one of the best chefs in Calcutta she never found herself cooking or stepping foot in the kitchen for that matter.

She came to England aged 23 after a “semi-arranged marriage.” Pinky met her husband through family and after three weeks of knowing each other they got married.

Travelling to the UK as a new bride was a wonderful adventure says Pinky. The transition was fine but the only problem she encountered was having to buy suitable clothes for the cold British winter. 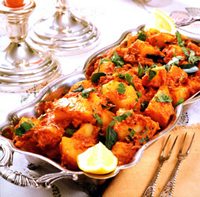 Pinky had no formal career aspirations; she thought she’d lead the same life as her mother. So Pinky’s husband was surprised to find out she didn’t know anything about authentic Indian cooking.

After having two sons Pinky taught herself to cook and this interest soon became a life-long passion for her.

When her older son was 10 someone asked her if she would teach an Indian cookery course. Pinky was apprehensive at the thought of teaching other people how to master the Indian cuisine having only taught herself.

Pinky agreed and went in with bags of enthusiasm. Luckily it worked; her pupils loved the food and energy in the classes. So much so that one pupil asked her to do consultancy work with Sharwood’s, she later went onto work with manufacturers helping develop Indian sauces for Tesco and other supermarkets. 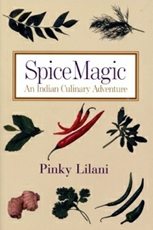 This led to Pinky writing her first cook book, Spice Magic, in 2001 which boasts over 100 Indian recipes. New to the idea of publishing Pinky assumed people would just simply buy her book, but nobody wanted to stock it as they’d never even heard of her.

So Pinky asked bookshops if she could come in-store and do cooking demonstrations in order to promote her book. Soon she found herself regularly cooking her renowned spicy Bombay potatoes, which was a huge success as was her book.

This soon led to her self-built company Spice Magic where she offers private parties and corporate seminars the chance to learn how to cook Indian dishes like the food guru herself.

“Cooking is a huge part of my life now, considering I didn’t know how to cook when I first came here. I incorporate cooking into everything I do.

“I take my wok everywhere with me,” Pinky laughs, “I haven’t got it with me now though.” 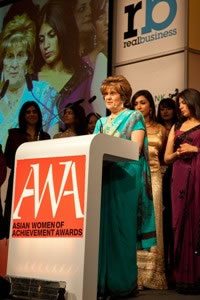 By this time Pinky was well established having co-founded the Asian Women of Achievement Awards in 1999, of which she is the Chairman.

The awards were created to recognise and celebrate the outstanding contribution of Asian women from a variety of fields in British society i.e. public service, sport, media, entrepreneur, social and humanitarian etc.

“I was involved with the European Women of Achievement awards so I thought why can’t we do that for Asian women?

“There was also an Asian businessman of the year award and it’s always about men in the Asian community, the women are always seen walking two steps behind.

“But Asian women are achieving so much now and deserve to be acknowledged.”

Seven years later Pinky set up the Women of the Future awards which recognises the achievements of women under 35.

Other champion awards she founded include the: Inspirational Women’s Network, Women of Achievement Ambassador’s Programme, Women of the Future and Global Empowerment Award.

“I’m very self-motivated so when I want to do something I just find ways to do it. I love meeting new people and hearing their stories and how those stories can help inspire others to grow.” 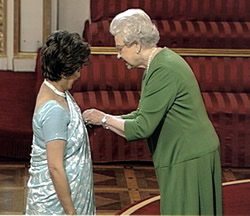 The 57-year-old’s impressive and extensive recognition speaks volumes and without a doubt makes her one of Britain’s most inspirational Asian women.

Pinky received an OBE in the 2007 New Year honour’s list for her charity work and her immense efforts to celebrate triumphant women. She is the patron of the Asian Women’s Resource Centre, National Black Police association and Westminster Educational Society.

In 2009, the mother of two was also named as one of Britain’s 100 most entrepreneurial women and one of the 50 most influential and powerful Muslim women in the UK. 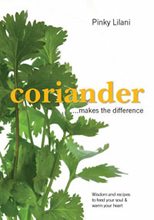 And with the eventual success of her first book she decided to publish a second, within the same year, called Coriander… makes the difference said to be “wisdom and recipes to feed your soul and warm your heart.”

In addition to this Pinky was prestigiously chosen to be featured in Alice Instone’s portrait “21 women of the 21st century – Contemporary Women of Influence and Power.

“To be honest, when people say to me wow you must be proud to have achieved so much, I don’t see it like that. I see myself moving onto the next challenge, not looking back, and at times struggling when working towards my next goal.” 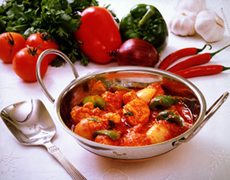 Pinky believes the key to success is “never giving up, there’s nothing called failure. It’s about being focused, committed and persistent.”

Her advice to this generation’s British-Asian women is: “go and expand your horizon; do the things you thought you couldn’t, grab the opportunities you have and meet people who are different to yourself.”

Pinky reckons Asian communities tend to stay close to each other to feel comfortable but instead they’re shutting everybody else out.

This led to her setting up the Women’s Interfaith Network with a Jewish friend in 2003 following the 9/11 attacks. It aims to connect women from all faiths and cultures to break down any prejudices. 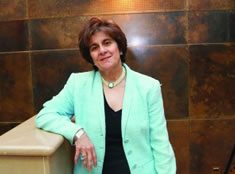 She wants to ensure the organisations she has set up are secure so they can be a legacy for generations to come. Pinky would hate to see prestigious awards like the AWA go due to funding or other reasons.

Pinky is at the age now where she has received a vast amount of publicity and recognition but would like to focus more on philanthropy.

Her life mantra as a Muslim woman is “you have not lived a perfect day unless you have done something for someone who can never repay you,” which is evident with this women’s champion.

Jennideep is an avid member of the editorial team, who enjoys traveling, reading and socialising. She has an enthusiastic approach to all that she does and a passion for life. Her motto is: "Life’s too short so just live, laugh and love!"
Food Delights of Diwali
Are UK Curry Houses Struggling?