The raid took place in the outskirts of Sialkot, in Punjab, after Italy informed authorities through Interpol.

This is the first time Interpol has provided information about the existence of a criminal operation involving child pornography in Pakistan.

According to Mohammad Iqbal, a top FIA official in the eastern Punjab province, incriminating material was recovered from a computer allegedly belonging to one of the men.

Referring to one of the two suspects, Iqbal told The Associated Press:

“He was in contact with an international gang and was posting child pornography videos on the dark web.”

The first suspect was interrogated following his arrest, leading to the capture of an accomplice.

Two more suspects are still on the loose.

Under Pakistani law, the two suspects must be taken before a judge within 24 hours of their arrest.

The FIA will probably ask for additional time to investigate before filing formal charges against them.

The worldwide web appears like an iceberg with different layers below the surface.

The tip of the iceberg is the so-called surface web and includes websites that can be found using search engines like Google and Yahoo.

The deep web lies below the surface and accounts for approximately 96% of all websites, together with the dark web.

The hidden web is so large that it is impossible to find out how many pages or websites are really active. 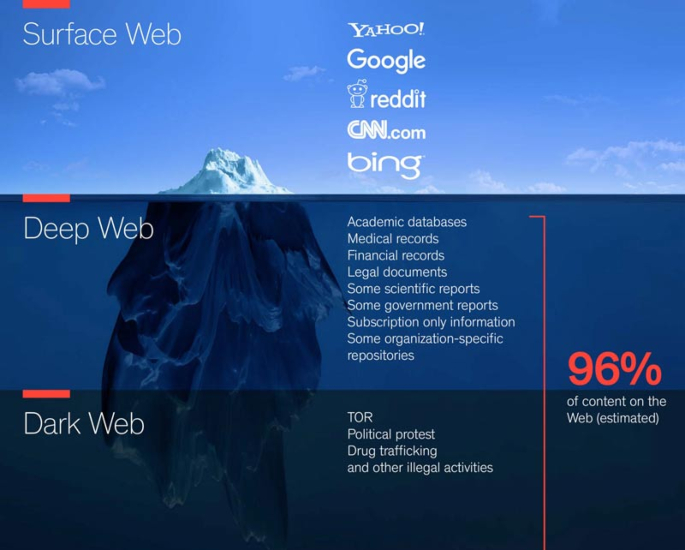 Deep web sites can be protected with passwords or other security measures, and the hidden content is usually relatively safe.

Furthermore, these sites do not harm netizens’ computers or safety, as the main aim is to protect user information and privacy. It can contain documents and information which are not meant for public view.

On the other hand, the dark web refers to sites not indexed and only accessible via specific web browsers, like Tor, originally developed to help protect US Intelligence’s online communication.

It is also the hotbed of illegal activities, like illegal business dealings.

The dark web presents more dangers than the deep web, as illegal cyber activity can be much more extreme and threatening.