Nominations for the Lux Style Awards 2014

The nominations for the 13th Lux Style Awards have been announced. From the classiest and most glamourous designers, models and celebrities of Pakistan, DESIblitz has all you need to know.

Aamina Sheikh sees two film nominations for Best Actress for her roles in Josh and Seedlings.

The 13th Lux Style Awards (LSA) returns with the best of music, fashion, film and TV glamour that Pakistan has to offer.

The nominations have been unveiled for 27 separate categories that span the entire board of Pakistani entertainment.

LSA 2014 promises to be full to the brim with beautiful and exceptionally talented stars, and some hugely energetic performances on the night.

Find out all the nominations for the Lux Style Awards 2014 here. 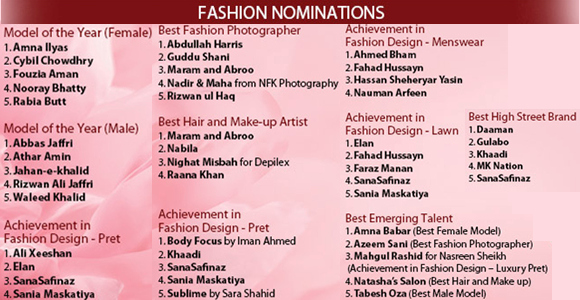 Each genre of entertainment is managed by its own jury, who have decided on the category nominations for 2014. The fashion jury has chosen 10 categories including Best Model, Best Menswear, Prêt, Lawn, High Street, and Best Emerging Talent.

It is interesting that the jury has taken note of the changing face of Pakistani fashion and introduced Prêt wear and High Street designers alongside each other. Of those nominated, Sana Safinaz and Sania Maskatiya have both picked up several nominations in almost every category.

Alongside these two heavyweights are Elan, Fahad Hussayn and Faraz Manan as well as High Street labels, Daaman, Gulabo, Khaadi, and MK Nation.

As well as the designers, models and make-up artists also seeking recognition, Lux also has the Best Fashion Photographer category. The nominees for this category include Abdullah Harris, Guddu Shani, Maram and Abroo, Nadir and Maha from NFK Photography, and Rizwan ul Haq.

The Film industry in Pakistan has also seen an upward turn in the last year, with many new and exciting films being released. This new wave of cinema that is also being recognised internationally, showcases the growing talent of young filmmakers, and they are at the heart of this year’s nominations.

Main Hoon Shahid Afridi, Siyaah, Waar and Zinda Bhaag are all competing for Best Film. According to LSA Organisers, the winner will be decided based on both Box Office records and the Jury themselves.

Syed Ali Raza Usama, Azfar Jafri, Bilal Lashari, and Meenu and Farjad are also all up for the Best Director award; and Aamina Sheikh sees two film nominations for Best Actress for her roles in Josh and Seedlings.

On the TV front there are 8 different categories accommodating both Satellite and Terrestrial. Taking into consideration the extraordinary Serials that have taken over the nation in the last 12 months, TV has gone from strength to strength.

On the other side, actresses, Irsa Ghazal, Meher Bano, Sajal Ali, Samina Peerzada and Sanam Saeed have all been nominated for Best TV Actress (Satellite).

For the 2014 awards, the music categories are also seeing some serious competition with Jal, Adil Omar, Saturn and Rizwan Ali all up for Best Album.

LSA is also celebrating new and upcoming talent on the music scene with Bell, Disbelief, Fables of Cantt, Shehreyar Mirza, and Soch all up for awards in the Best Emerging Talent category.

With the Lux Style Awards being the annual entertainment event of Pakistan, we can certainly expect all the stars to emerge onto the runway in their finest. The 13th Lux Style Awards will be held in late 2014 and aired across the country. Good luck to all the nominees!

Aisha is an editor and a creative writer. Her passions include music, theatre, art and reading. Her motto is “Life is too short, so eat dessert first!”
Highlights of BMW India Bridal Fashion Week
Designers Amaze at Lakmè Winter/Festive 2014