The nominations process for the Asian Media Awards 2014 has opened. The awards show celebrates the best of Asian Media in the UK. The ceremony is back for a second consecutive year after the success of the 2013 show.

"There is a major focus this year on promoting young talent."

Nominations for the second year of the Asian Media Awards (AMA) are now open.

Launched only in 2013, the Asian Media Awards have proved to be a huge success in celebrating Asian talent in the competitive media world.

Personalities, both known and unknown were given the unique opportunity to promote their achievements on a national level. 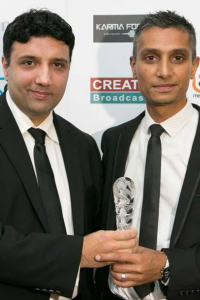 DESIblitz.com were very honoured to receive the award for ‘Best Website 2013’ at the Asian Media Awards. As a British Asian lifestyle magazine, DESIblitz strives to offer the most original content for its global readership.

Other awards delivered on the night included the ‘Media Personality of the Year’ which was won by popular journalist, Medhi Hasan, and the ‘Outstanding Contribution to the Media industry’ which was won by British actress and writer, Jamila Massey.

A special award which honours actress Sophiya Haque, who sadly died of cancer in 2013, was also launched and awarded to Coronation Street star, Jimmi Harkishin for ‘Outstanding Contribution to British Television’.

Other winners included Eastern Eye, who received ‘Newspaper of the Year’, while The Asian Today won ‘Best Local Newspaper’. Adil Ray took ‘Best TV character’ for his role as Mr Khan in Citizen Khan, and radio presenter Nihal was awarded ‘Best Radio Show’ and ‘Radio Presenter of the Year’.

For 2014, a number of special awards have been introduced into the event, showing a keen focus on young talent across the country. Umbreen Ali, Media Manager for the awards, said:

“It was a privilege to host the inaugural Asian Media Awards in 2013. This year we are looking forward to celebrating new talent and inspiring work from a range of sectors within the industry.

“The media continues to embrace the changes carved by the internet. The categories list this year reflects that and includes several new genres which aim to recognise new and aspiring talent.

“There is a major focus on this year on promoting young talent as we launch the Outstanding Young Journalist Award.”

The 2014 awards are also highlighting the best of the on-line platform. New categories that have been added to the roster include ‘Outstanding Young Journalist’ and a new ‘Best Video Channel’ award honouring the best and most creative video content.

The introduction of the ‘Outstanding Young Journalist’ shows the events efforts to recognise the next generation of media talent while the inclusion of the ‘Best Video Channel’ award displays the advances of Asian Media into all aspects of the Media spectrum.

Here is a full list of categories and nominations open for each Asian Media Award for 2014:

In essence, the aim of AMA is to recognise the accomplishments of Asian Media industry. The show promotes all types of media from radio stations, ground-breaking journalists and reporters to newspapers and magazines.

Judging all entries for  this year include experts from Al-Jazeera, Press Association Training, Mediacom, The Huffington Post and Blue Rubicon.

Short-listed by an impartial panel of judges, the finalists of the Asian Media Awards 2014 will be announced on Monday 29th September at ITV Studios in London. The awards show itself will follow later in the year in October in Manchester.

The Asian Media Awards 2014 will take place at the same location as last year in the Hilton Manchester Deansgate.

You can nominate on-line via the Asian Media Awards website. The closing date for all entries is August 25 at 5pm, and any late submissions will not be accepted.

DESIblitz.com wishes all our readers and any future nominations the best of luck for the 2014 Asian Media Awards.

Tom, currently studying Marketing in Sheffield, has a passion about all things sport. He also enjoys playing music and listening to a great band. His motto is: “Life’s too short, have some fun!”