The Delhi government has announced that they will install 500 solar-powered water ATMs across the city. It is hoped this will provide clean, affordable water to people in Delhi.

The Indian government has proposed that in order to provide drinking water at an affordable price, it will install 500 water ATMs across Delhi.

The Union Finance Minister Arun Jaitley made the announcement during his speech to present the Delhi budget.

Continuing, Jaitley referred to the fact that there are many areas of India’s national capital which do not have clean drinking water.

He stated: “To provide drinking water facilities at an affordable price in water deficient areas, small sized decentralised drinking water Reverse Osmosis (RO) based plants will be set up and drinking water will be made available through water ATMs.”

This proposal, which has now been cleared by Lt-Governor Najeeb Jung, will take “pay-and-use” water ATMs to the water-starved slums and resettlement colonies of Delhi. 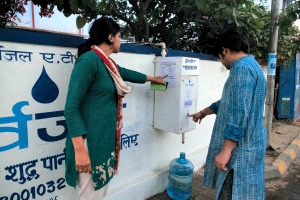 The water ATM machines operate as cashless vending machines dispensing water and are solar-powered. The customer uses a rechargeable smart card to draw water from the kiosk.

It will be possible for people to draw up to a maximum 20 litres of water at one time. The machines will be filled with 300-400 litres of water in order but no more, to ensure that all the water in each ATM is used before it becomes stale.

The money is automatically taken off the smart card, and corresponds to the volume of water drawn from the ATM. One litre of water taken from the ATM machine would amount to a cost of 30 paise.

The idea of water ATMs was first proposed by Sarvajal, a social enterprise originally established by the Ajay G Piramal Foundation, which is also supported by the social innovation department of Audi.

A pilot of the project was then launched earlier this year at Savda Ghevra, a resettlement colony in the Southwest of Delhi. This pilot was funded and co-ordinated by the Delhi Jal Board, who also worked with the Delhi Urban Shelter Improvement Board.

They decided to support the programme after Sarvajal had made several presentations to the Delhi government. 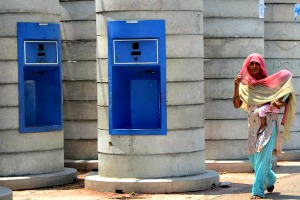 Savda Ghevra is a slum colony which was established in 2005, and is currently under the jurisdiction of the Delhi Urban Shelter Improvement Board. It is inhabited by at least 8, 500 families.

To solve the water shortages of the settlement, the Delhi Urban Shelter Improvement Board has collaborated with a private company, Piramal Water Pvt Ltd, to set up a decentralised drinking water plant and also solar-powered ATMs in 14 different locations.

An official from the Delhi Urban Shelter Improvement Board said:

“In Savda Ghevra, we have issued 8,000 cards and roughly 8,500 families are benefitting from the system. Each litre drawn gets debited from the smart card, which carries a 12-digit code.”

Judging by the success of this pilot scheme, the water ATMs could be a way to make a real difference to the people of India’s national capital.

A senior official from the Delhi Jal Board said: “Buoyed by the success of the pilot project, the Delhi Jal Board decided to install the water ATMs in 10 other colonies, of which seven will be resettlement colonies around Savda Ghevra in Southwest Delhi and three others in South Delhi.”

The Delhi government hopes that by extending the scheme and installing more water machines, they can bring affordable and clean drinking water to people throughout the city and solve the water shortage problems of much of the city.

Eleanor is an English undergraduate, who enjoys reading, writing and anything media related. Aside from journalism, she is also passionate about music and believes in the motto: “When you love what you do, you’ll never work another day in your life.”
Nominations Open for Asian Media Awards 2014
HS2 Railway to be built in Birmingham