The annual Asian Media Awards took place at the Hilton Deansgate in Manchester on October 28, 2014. The awards celebrated the incredible talent of Asians in the media all over the UK. DESIblitz has all the highlights of the glamorous night.

"As Asians we tend not to make much noise. But we need to make more noise and say that it is not enough.”

Recognising excellent achievement in all areas of the media world, the Asian Media Awards triumphed again in celebrating the best British Asian talent around the UK.

Popular presenter Sameena Ali Khan and Manish Bhasin, from the Football League Show, hosted the ceremony for 2014. Both kept the high profile guests enthralled throughout the evening with their quirky banter and on-stage selfies.

The AMA saw a few changes this year and introduced a new category, ‘Best Video Channel’, which celebrates the most innovative and creative content on a video sharing channel. Winning for 2014 was the young YouTuber, Humza Arshad, creator of the popular Diary of a Badman.

There was stiff competition between some of Britain’s leading Asian publications for ‘Publication of the Year’. Eastern Eye took the award, beating the likes of Asian Wealth Magazine, Asian Today, Asian World and Asian Lite. 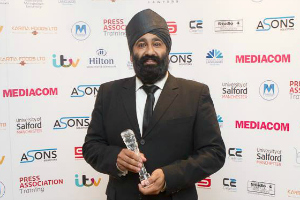 In the digital and online category, Look! A Singh won ‘Best Blog’, while ‘Best Website’ was awarded to BizAsiaLive.com.

Farzana Baduel, the founder and Managing Director of Curzon PR took the award for ‘Media Professional of the Year’, while Media Moguls won ‘Media Agency of the Year’ for a second year in a row.

Moving onto TV and Radio, the BBC Asian Network continued their winning streak with ‘Radio Station of the Year’ for the second year in a row, while BBC presenter Tommy Sandhu won the ‘Best Radio Show’ award.

‘Best TV Character’ was awarded to Chris Bisson who plays Jai Sharma in Emmerdale, while ‘Best TV Show’ was given to the hugely entertaining Burka Avenger which is about an inspirational school teacher who doubles as a super-heroine. 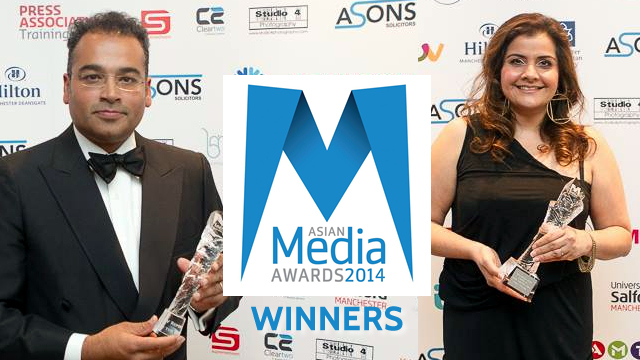 Star Plus was awarded ‘TV Channel of the Year’, and ‘Best Investigation’ was given to Ross Kemp for his compelling documentary on Extreme India for Sky 1. Guests were pleasantly surprised as Ross collected the award himself and spoke about the incredible importance of highlighting serious issues across India and the rest of South Asia. 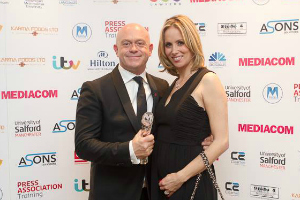 The ‘Media Personality of the Year’ award was given to well-known Channel 4 News reporter, Krishnan Guru-Murthy.

Krishnan is perhaps the most visible British Asian in mainstream media at the moment, having served the Channel 4 News team since he was the age of 28.

On accepting his award, Krishnan mentioned that opportunities for British Asians in mainstream media was slowing, as compared to when he first started out:

“A lot of us feel that a lot of things are going backwards on [Asian] representation in the media. As Asians we tend not to make much noise. But we need to make more noise and say that it is not enough.”

Krishnan also commented on the encouraging support that the AMA’s provided to young British Asians seeking out a career in media. The ‘Outstanding Young Journalist’ award was given to Layla Haidrani who was one of the first ever UK students to become a blogger for The Huffington Post UK.

Special Awards were also given to the likes of filmmaker and director Waris Hussein for ‘Outstanding Contribution to Media’. Nina Wadia took the ‘Sophiya Haque Services to British Television’ award for her incredible work on stage, TV and film, in an impressive career that has spanned decades.

Media Manager for the AMA 2014, Umbreen Ali said: “It was pleasing to see so many people representing the strength and depth within the media industry of the UK.

“These awards are not about those we honour today but the people and organisations who continue to innovate and use their creative skills to entertain and inform all communities.”

Here is the full list of winners for the Asian Media Awards 2014:

Publication of the Year
Eastern Eye

Journalist of the Year
Shekhar Bhatia

Once again, the awards highlight the significance of Asian media within Britain, and the role it plays in bridging the gap between ethnic communities and the mainstream media. For 2015, the Asian Media Awards can only get bigger and better. Congratulations to all of the winners!