Nashra Balagamwala: Creator of the Arranged Marriage Board Game

Nashra Balagamwala speaks to DESIblitz about the Arranged Marriage Board Game, her own experiences with rishtas and her top tips to escape the shaadi noose.

"My life’s biggest problem became my biggest success so far. Who would have thought?"

Running away (or at least trying to) from the prospect of an arranged marriage, seems to be a storyline almost every Desi girl can boast of in her biography.

This certainly was the case for Pakistani graphic designer, Nashra Balagamwala, albeit with a slight twist.

The 25-year-old decided to turn the one thing she most dreaded into a viral board game, shining a light on one of South Asia’s most notorious traditions in the process.

Since its formal release, a lot has changed for the game and for Nashra herself. What began as a fun board game has now grown into a full-blown social conversation surrounding patriarchal practice and gender roles.

DESIblitz caught up with the New York-based designer about how her Arranged Marriage Board Game evolved and her accidental stardom.

Drawing Inspiration from her own Rishta Meetings

Nashra can’t help but laugh as she remembers the time her family tried to set up a meeting with a potential groom:

“Winter break means shaadi season back home and immediately after that comes rishta season. This is because the wedding season is the rishta aunty’s field to take note of eligible girls to marry off,” she explains.

“At the age of 18, I was supposed to meet a boy during one such rishta season. I stalked him on Facebook to find something about him I could antagonise my parents with.”

“That’s when I had this moment of epiphany. I do this every time I meet a guy and it was getting out of hand. So, I sat down and made a list of everything I have done to evade the aunty. That eventually became this game we have today.” 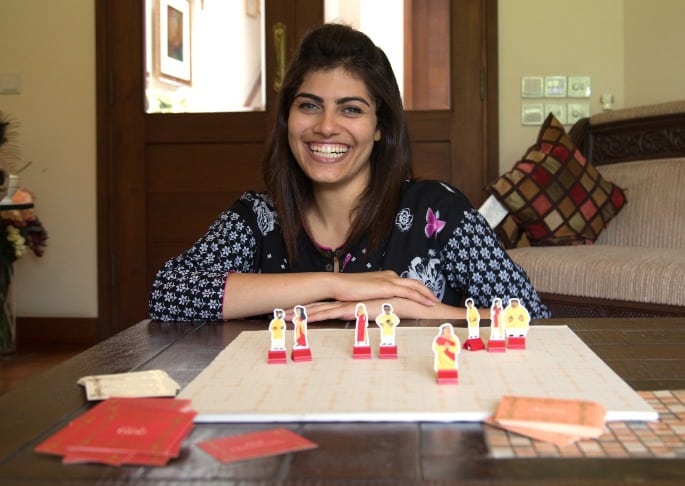 Her experience made for an interesting college project which was forgotten about once done for the class.

However, things changed when her application for a work visa to the United States of America was not granted despite sponsorship:

“I was looking for alternative ways to make it to the US and that’s when I heard about the artist’s visa. The catch was that you needed to have work that was internationally acclaimed. I went back to the game and began redesigning it.”

Nashra sent details of the prototype to a number of design blogs which eventually led to it being picked up by The Guardian. There was no looking back:

“My life’s biggest problem became my biggest success so far. Who would have thought?”

Since then, Arranged and her perspectives on arranged marriage were covered by the likes of the BBC, NDTV, The Telegraph, NBC and NPR.

Packed in a gorgeous red and gold box, Arranged looks like a lot like a shaadi invitation.  In it, you will find a board, a rulebook, three decks of cards and nine caricatures.

The primary characters are three women, the potential brides, and the all-powerful rishta aunty.

The game also has four potential grooms including some not-so-enchanting options like ‘Pervy Perverson’, ‘the emo one’ and ‘Mama’s boy’.

The pot of gold at the end of the rainbow is the golden boy, that dream man every girl must aspire to be perfect for. 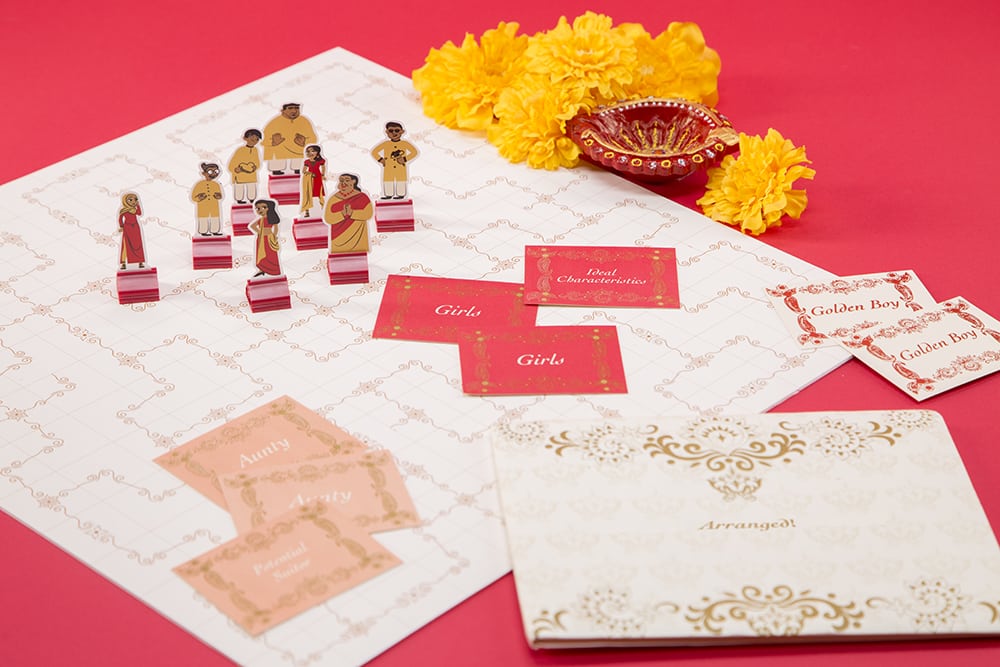 The rules are simple. If you’re one of the girls, avoid an arranged marriage at all cost; a little obvious considering the options available; unless it’s the golden boy.

If you’re the rishta aunty, make the binder proud and gun down the girls with the shaadi bullet as soon as possible.

The ability to make perfectly round rotis or tie a saree earns you points with the aunty while tattoos, visible bra straps and a little weight push her away.

The cat and mouse game though is reversed when the Golden Boy is unleashed onto the board. From this point, our mares have only one goal – to take home the stallion.

So, how do you win the game? Nashra tells us:

“Point is, there’s no way to win. No one does. The game ends when everyone marries. Eventually, no matter how liberal a woman is, by the time she’s 31-32 at the most, they almost always decide to settle down.”

It’s not all as morose as it sounds.

“I didn’t want this to have your typical happy ending because escaping marriage isn’t always realistic. So, the point was to have at least one or two people ending up with the kind of people they wanted,” she adds. 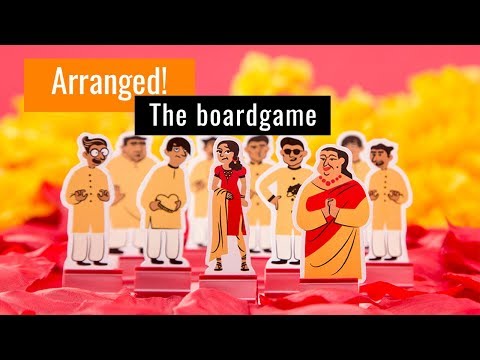 The Characters and the Players

“People I went to school with and characters I hear people talk about inspired the faces of this game. Pervy Perverson, for instance, is your roadside whistler, the one who makes you want to wrap your dupatta around a little more,” she quips.

What’s really terrifying though is a woman with a binder full of eligible girls.

Nashra recalls an interview NPR did with an actual rishta aunty:

“This lady categorised women according to occupation and parameters like height, weight and skin colour.

“She had a chart with various skin colours recorded for an accurate description. She even had a separate binder for over aged women,” she adds.

We are, however, interested in who her real-life rishta aunty is:

“Our Rabo is a woman who has gotten most of the people in my mum’s generation and several people in my generation married. I was always afraid of being discovered by Rabo’s sources each time I went out with my male friends,” she says with a heavy sigh.

“Funnily enough, I have never met her. I always assumed she was a fat aunty, eating gulab jamuns and jalebis and fixing rishtas. When I showed her character to my parents, they revealed that she is actually a skinny person. Missed the ball on that one,” she says, with a giggle.

What about the golden boy, we asked.

“The guy I was supposed to meet, the guy I can attribute as an inspiration for the game, was perhaps my golden boy.

“Light skinned, light eyed, easily the most attractive Pakistani man I’ve met, went to an Ivy League, has a foreign passport, wasn’t living with his parents – he was the complete package. I was 18 then, it was too soon so nothing mattered,” she adds.

Her accidental stardom got her the ticket to the States but it was a success her parents had to take with a pinch of salt:

Her experience with the press highlighted the common misconceptions the West has about arranged marriages.

“Arranged marriage and forced marriages are often seen as one and the same. That’s a big error.  Everything people here have seen in the media is aggressive and negative. A normal arranged marriage is quite boring, right? It isn’t clickbaity enough. So, people assume the worst and don’t give the concept a chance.”

For her parents, Nashra had forgotten her roots and was conveniently dismissing her culture and country for personal gain.

That wasn’t what Nashra has scribbled on the edge of the blueprint though. 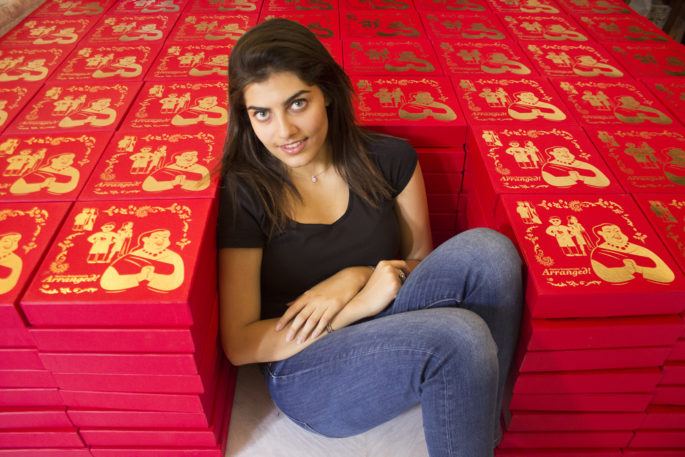 Six months after she released the game, BBC got back in touch with her for a follow-up. She used the opportunity to speak about how she was misunderstood:

“That article changed things for me. Now that my real intention has been understood, it makes the success more wholesome.”

The sound of an awkward engineered meet-up puts off Nashra, who is looking for a more textbook variety of romance. That can’t discredit the positive stories, she believes:

“In a conservative society like Pakistan, arranged marriages give people the opportunity to meet and get to know each other.

“If you’re going to finalise things in one or two meetings, that’s ridiculous. If the two people are given time to get to know each other and work out their compatibility though, how is it any different from a dating app?”

The importance assigned to producing the game in Pakistan is one of it’s most striking yet underplayed successes.

This move to support small businesses in Pakistan despite footing a larger international shipping bill is commendable.

The game also opens avenues for conversations that need to be had, especially in Pakistan:

“I have included references to things like using a tampon. This isn’t something I’ve done to particularly fend off a rishta aunty. It’s still a huge taboo back home,” Nashra says.

Discussions on arranged marriage must also include how often women settle for it as a convenient option:

“I have seen so many women go from their father’s house to their husband’s house.

“I went on a vacation with a friend who didn’t know how to use public transport. She was first baby-ed by her father and now by her husband. How will she manage, should the need arise?”

Nashra’s observation raises the pertinent question of women staying in loveless unhappy marriages simply because of their dependence on the partner.

The game hasn’t just been a PSA vehicle for her though. Playing the game with her friends introduced Nashra to experiences she was lucky to not go through:

“While playing Arranged with my closest friends, I learnt that one of them was approached by a matchmaker for the first time at her father’s funeral. I had no idea despite being very close to her.”

Is Pakistan opening itself to a Hint of Feminism?

With the game and the international publicity it has brought Nashra, one would expect her to lose favour with the ‘eligibility market’.

Nashra too briefly revelled in the apparent success of her endeavours to live her life independent of matrimonial pressures. That was not to last very long though: 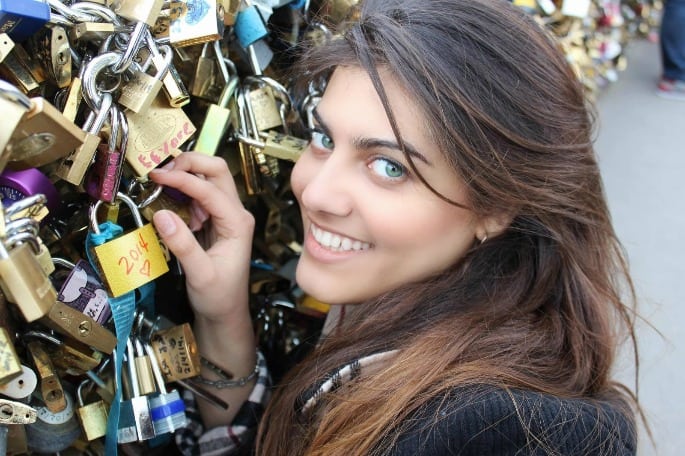 “Having said that, six months later I started getting proposals again and I honestly think it’s because I am a light-skinned and light-eyed girl, not because I have achieved anything worthwhile.”

Things are changing in Pakistan though, even if it’s at snail pace.

“Having said that, I know people who have married right after school. It really depends on your social setting.” 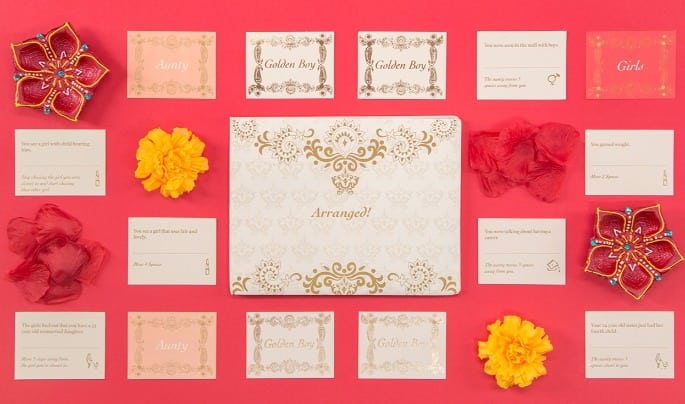 The game introduces the player to a number of ingenious ways to evade the rishta aunty.

From wearing a fake engagement ring to putting on some ‘questionable’ red lipstick, Nashra has done and listed them all.

What are the most effective strategies though? Here is what Nashra advises:

Want to give the game a go? You can buy Nashra Balagamwala’s Arranged Marriage Board Game here.

Lavanya is a journalism graduate and a true-blue Madrasi. She is currently oscillating between her love for travel and photography and the daunting responsibilities of being an MA student. Her motto is, "Always aspire for more - money, food, drama and dogs."
Why British Asian Women fear and hide Breast Cancer
‘Is Love Color Blind?’: Explores Love and Cultural Racism