Over 50% of World Marriages are Arranged say New Statistics

New statistics have revealed that over 50% of world marriages are arranged, with India having one of the highest percentages of arranged marriage. It shows this option still remains highly popular in South Asian culture.

The research revealed that an annual 26,250,000 worldwide weddings were arranged.

New statistics, conducted by Statistic Brain, have revealed that over 50% of world marriages are arranged. This highlights that, despite changing attitudes, many still opt for an arranged marriage.

Published on 7th February 2018, these figures give a closer insight into this type of union.

The research revealed that an annual 26,250,000 worldwide marriages were arranged – making its percentage 53.25%. This means then global love marriages are 46.75%; almost making the two methods evenly split.

There are certain countries where this practice is considered as acceptable in society. This includes Indian, Pakistan and Desi communities in the Western world. But it’s also a traditional way to marry in other nations, such as Japan (known as ‘miai’) and China.

However, many will envisage an Indian wedding when they think of an arranged marriage. Indeed, Statistic Brain revealed that this practice remains hugely popular in the country. It revealed 88.4% of marriages in India arranged.

Arranged marriages in India have been conducted for centuries, so the custom of these marriages is still favoured immensely.

Despite the rising appeal of love marriage, it’s yet to make a striking impact. Many Indians still seem to choose the traditional route – but why does it remain a desirable choice?

One answer could lie in metropolitan India versus rural India. While individuals in major cities such as Mumbai or Delhi may prefer a marriage based on love, rural families still tend to use the traditional route of arrangement.

Education plays a role too. Most Indians living in cities will be from more educated backgrounds compared to those from villages. Therefore, the choice in the type of marriage is bound to be affected.

Therefore, it’s likely that the high proportion of these arranged marriages are taking place in the rural country, rather than cities. 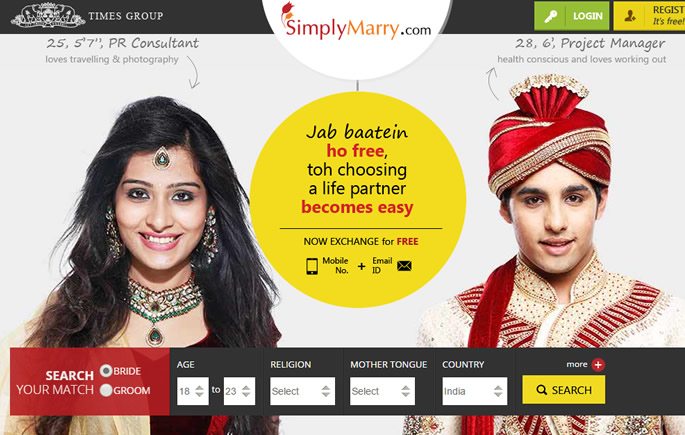 Also, the growth of matrimonial websites in India which still focus on ‘arranging’ marriages is a new way of finding suitable partners with many of the profiles being created by parents and families. These sites tend to provide focused criteria which can categorise searches by religion, mother tongue and in some cases, even caste and creed.

Therefore, the protocol of ‘arranged marriage’ in India and in countries like the UK, USA, Canada and Australia where there are many South Asians residing, is still a trusted one.

In addition to marriages, the statistics also show surprising results on divorce. The divorce rate for arranged marriages in India is just at 1.2%. Even on a global scale, the rate is just at 6.4%. 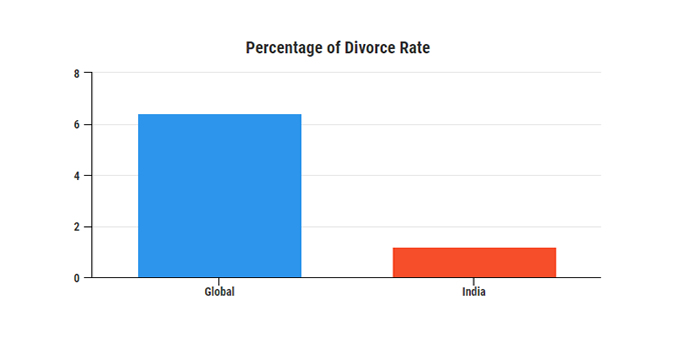 With an increase in liberal thinking and new technology, many would believe this could increase the risk of divorce. However, the statistics show a contrasting picture; but does it really mean many are happy with their marriage?

Divorce is becoming more common in India, as a 2016 study, conducted by Suraj Jacob and Sreeparna Chattopadhyay, reported there were 1.36 million people divorced in the country. However, some still regard it as a taboo, particularly those who have more traditional mindsets.

If a couple plan to divorce, but their families do not agree, they may find difficulty in seeking support. Therefore, literally enforcing them to still remain together or go down an alternative route – separation. The 2016 study revealed that the number of individuals classed as separated is higher than those classed as divorced.

Divorcees made up 0.24 million of the married population, while those separated represented 0.61 million.

The stigma, combined with the long process of obtaining a divorce, may contribute to the low rate. Where potentially many couples separate but don’t actually divorce.

Statistic Brain also explored the aspect of forced marriages, discovering that an annual number of 11,250,000 girls, aged below 18, are forced to marry. It also found that 11% of girls under the age of 15 in developing countries become child brides.

South Asia actually has the high percentages of girls under 18 forced to marry, with its figure at 46.4%. Africa came next, with a percentage of 42%; meaning both continents represented nearly a third of the total figure. 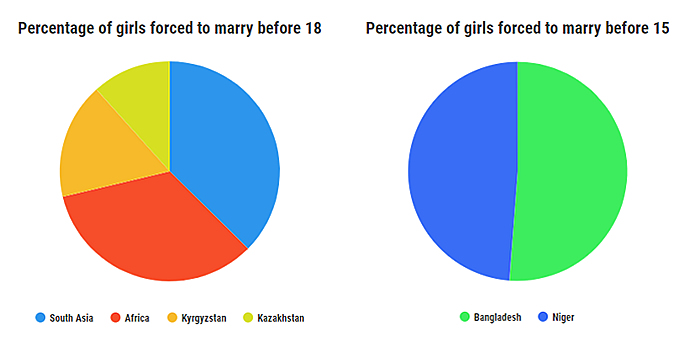 In regards to girls under the age of 15, the research showed Bangladesh had 27.3% of these forced marriages. Following the country was Niger, located in Africa, with 26%.

These results give fresh fears for child brides, particularly in South Asia and Africa. However, it also remains a critical issue amongst British Asian communities, where parents will take their children aboard during school holidays to get them married.

How are countries tackling this growing problem? While the UK introduced the Forced Marriage Law in 2014, the Indian Supreme Court ruled husbands having sex with child brides as rape.

These laws offer a hopeful chance that governments will tackle and halt the practice. However, many still feel concerned. For example, a 2015 report suggested that UK police were not ready to deal with forced marriages.

Looking at the ruling on child brides, arguments rose over how it would become enforced. As its guidelines say a complaint can be made within the timeframe of a year, meaning it could become an impractical law.

As discussed, these statistics have given surprising figures on arranged marriages. Its popularity continuing in countries such as India, meaning the desire to marry for love is still a minority choice.

But with the younger generation of Indians becoming liberal and embracing Western culture, it will be interesting to see if an arranged marriage is still how people marry the most in the future.

However, the change that is needed lies in the practice of forced marriage. With such high figures recorded in South Asia and Africa, this only stresses how governments need to create rulings that actively support child brides and eradicating the harrowing reality they face.