Birmingham Crown Court heard that Nadir Ali killed his cousin following a row. The dispute was over property worth £200,000.

"This tragic death was caused over a family disagreement"

Nadir Ali, aged 32, of Balsall Heath, Birmingham, was convicted of murder on March 12, 2020, for fatally stabbing his cousin.

He was also found guilty of three counts of wounding with intent after he stabbed two relatives.

The violence exploded amid a dispute about £200,000 worth of land, properties and shops in Pakistan. It was all owned by their grandfather who left it to Mr Khan’s mother.

She then decided to transfer it to her nephew Ali. Her sons were enraged and wanted to discuss it.

The family sought advice from a close family friend and on August 23, 2019, he agreed to act as a mediator.

One of Mr Khan’s brothers recorded the meeting at Wilton Road, Sparkhill. It was going smoothly until Ali was angered by a comment which had previously been made about his father.

He then produced a knife from his pocket and launched a violent attack against his cousin, repeatedly stabbing him.

Other family members were stabbed and injured as they tried to stop the attack which spilled out onto the street.

Mr Khan was pronounced dead at the scene.

Police arrived at the house, however, a short while later, Nadir Ali is seen walking towards one officer holding a bloodied knife.

Chilling bodycam footage showed Ali calmly walking down a hallway towards the officer with the weapon. The walls and floors are stained in blood.

The officer tells Ali: “Put that down” and then: “Give me that.”

The officer then asks Ali where he got the knife from, before ordering him back into a room where he sits down.

Looking at the injured men, the officer asks: “How have they got injured? You stabbed them?”

He is then arrested. 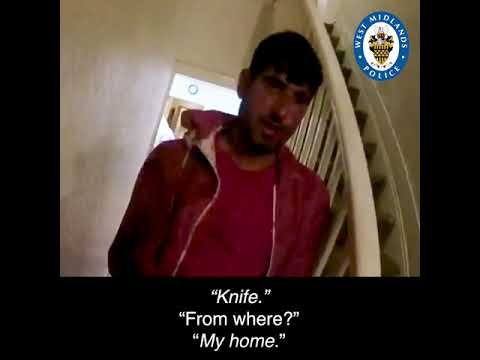 Following a trial, Nadir Ali was found guilty of murder and three counts of wounding with intent.

“This tragic death was caused over a family disagreement and it’s so upsetting to see that it ended in such a horrific way.”

Mr Khan’s family said: “Today justice has finally been done and the murderer of our beloved Ash has been convicted for his horrendous crimes.

“In this, we take great comfort, but no prison sentence will ever replace this great man who was the bedrock of our family and who was loved by so many.

“Sadly some in our family were envious of him and that envy led to his horrific cold-blooded murder.”

“Today he has been forced to answer for his crimes, but his true trial is yet to come on Judgement Day before Allah where there will be no hiding and in this, we take great comfort.

“Thankfully the mobile phone and CCTV footage doesn’t lie and whilst we as a family had to suffer the ordeal of seeing this replayed over many times during the trial, it was a necessary ordeal to endure in our search for the truth.

“Ash’s murder has impacted on so many people but we are not broken by this ordeal, we are stronger because of it.

“We are not consumed with hatred instead we are filled with extra love and compassion for those that have been left behind and we are united in support for one another.

“Rest in peace Ash in the knowledge that the truth has now been exposed and in the sure and certain knowledge that Nadir will have to serve his sentence and answer to his crime.”

Dhiren is a journalism graduate with a passion for gaming, watching films and sports. He also enjoys cooking from time to time. His motto is to “Live life one day at a time.”
Killer stabbed Young Father in Rage over Ex-Partner
Indian Husband kills Wife & Hangs Himself with Her Saree