Man killed and Four Injured after ‘Dispute over Land in Pakistan’

A man was killed and four others were injured in Birmingham. The violence stemmed from a dispute over some land in Pakistan.

"We understand all the men are known to each other"

Hashim Khan, aged 37, was stabbed to death and fours others were injured on Wilton Road, Sparkhill, Birmingham, following a dispute over land in Pakistan.

The incident happened on August 23, 2019, just after 10:40 pm. Officers received a report of a disorder and rushed to the scene.

Mr Khan was found with serious injuries and pronounced dead at the scene.

A 35-year-old man was found inside a house on the street with serious stab wounds. He remains in a critical condition in hospital.

Three others, two in their 30s and one in his 40s, also suffered injuries but police said they were not serious.

A 32-year-old man was arrested on suspicion of murder and faces questioning. A murder investigation was launched. Forensic teams searched the area for clues.

Police believe that the men were known to each other as Detective Inspector Nick Barnes said:

“A man has tragically died and others have been injured as a result of this disorder.

“We understand all the men are known to each other and we are not looking for anyone else in connection with the death at this stage.

“Enquiries around the circumstances leading to this disorder are ongoing and I would ask anyone with information which can assist these to get in contact.”

Neighbours speculated whether the incident was linked to a feud over some land in Pakistan. 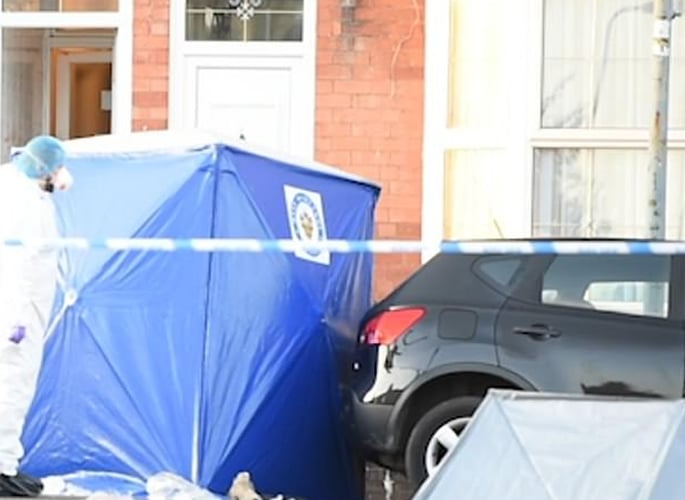 The Daily Mail reported that people at the scene explained how they tried to save Mr Khan’s life by pressing down on his wounds to stop the bleeding.

“By the time I got here, there was already a couple of people holding the lad, pressing down on his wounds.

“It was horrible. I looked at him and someone told him to recite his prayers.

“You wouldn’t expect it to happen on the road and the way it happened – it was like a movie.”

One man had returned from work about 30 minutes after the attack and explained that he saw a body behind a van that was covered with a cloth.

“Hashim was a wonderful loving husband, father, brother and friend. He touched the lives of many who knew him. He was the backbone in our family.

“We are out of our minds with grief, we are shattered, broken and can barely speak to anyone. We thank everyone for their kind words and condolences.

“At this moment in time, we would like as a family to be left alone to come to terms with our loss and grieve in peace.”