Lasan Victory on The F Word

Lasan Restaurant from Birmingham wowed Gordon Ramsay at the F Word cookery show final, walked through the semi-final and overwhelmed the 50 guests to also win the title for Best Local Indian Restaurant category.

it's bold but incredibly delicious

Lasan restaurant from Birmingham won the final and Indian Restaurants category on Gordon Ramsay’s F Word television show on Channel 4. They won the show’s final against chef team from The Pheasant, who serve traditional British food. Prior to the final, they won the semi-final against Santa Maria (South American cuisine) and Sweet Mandarin (Chinese cuisine).

The final was the major victory for Lasan, crowning them with the F Word’s Best Local Restaurant award. The final decision on the winner was made by Gordon Ramsay himself. After beating all the restaurants selected by the F Word team, it was an excellent example of  how differently Lasan and young chef Aktar Islam approach sophisticated Indian cuisine. 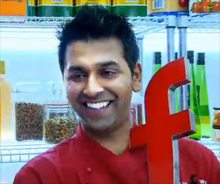 Aktar was completely overwhelmed and ecstatic about the final win and achievement. He said, “It’s an amazing sensation! I’ll be grinning like a Cheshire cat from now on!”

For the Indian Restaurant category, Lasan competed against Curry Corner from Cheltenham, Lasan’s cookery team led by Aktar Islam, took on the father and daughter team of Curry Corner led by Shamsul Krori, who is still going strong at the age of 60.

The aim of the series is to find Britain’s Best Local Restaurant. There are nine categories – Italian, Indian, French, Chinese, Spanish, Thai, The Americas, British and the Rest of the World. Then, two restaurants for each category are selected for the F Word cookery challenge, to serve 50 diners who are given the choice to pay for each course of a three course meal. Lasan and Curry Corner were selected for the Indian Restaurant category.

Gordon Ramsay selected the two restaurants after a UK wide search to find contenders that were suitable for the F word cookery challenge. The judging panel for the selection consisting of Gordon, Jean Baptiste, a culinary expert, and journalistic foodie, Janet Street-Porter; visited and tasted food at a large number of curry houses as recommended by viewers.

Viewers nominated contenders for the series on the Channel 4 website. Nominations amazingly reached 10,000 for 4,500 restaurants.

The job of narrowing them down was a very tough ordeal and with Indian cuisine loved nationally, the Indian category was probably one of the most difficult. Restaurants from Leeds to London were visited to sample authentic flavours whilst even experiencing dodgy décor in some cases! 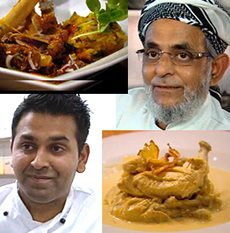 Therefore, the two restaurants making the Indian category final are seen as the best in the country by Gordon Ramsay. Aktar said of the Lasan selection, “It’s an amazing feeling because we know how intensive the process is.” Monrusha daughter of Shamshul from Curry Corner said, “I don’t think there are any words to truly describe how we felt.”

Curry Corner from Cheltenham is one of the oldest Bangladeshi restaurants in Britain and head chef, Shamsul Krori has been cooking for over 42 years. Gordon impressed said, “that’s before I was f**king born.”

Lasan from Birmingham is more contemporary Indian dining. The approach taken by head chef Aktar Islam is less traditional and the curried creations by head chef, Aktar Islam, are full of incredible flavours and ooze with his confidence. Gordon said of Aktar, “I love his arrogance because he reminds me; very similar to myself 15 years ago.”

The first course served to the guests consisted of the popular starter of samosas. Curry Corner’s Shamsul used his grandmother’s age old samosa recipe and his daughter used a cutter to create an attractive presentation. Whereas, Aktar joined by assistant chef, Aysan, used a modern recipe, the lamb used for the samosas was marinated in papaya paste. The results for the starter were amazing for Lasan. They impressed 24 out of 25 guests willing to pay, whereas, Curry Corner had 18.

The main course was a fish dish. Lasan served sea bass in a spiced Bengali fish broth while Curry Corner cooked a creamy monk-fish curry with saffron. Gordon Ramsay said after tasting the Lasan dish, “it’s bold but incredibly delicious” and then after tasting the Curry Corner dish, “very delicate, I like it but not spicy enough. The sea bass for me; the broth steals it.”

The scores for the main course were, 40 out of 50 to Lasan, where the 10 who didn’t pay said it was too spicy, and Curry Corner scored 27 out of 50, and the 23 that did not pay said their dish was too bland or fish was too rubbery. Lasan once again won the round. 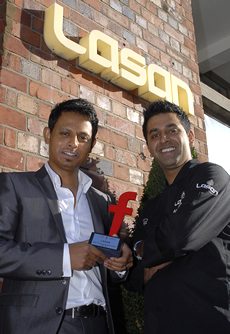 The dessert was the course left for Curry Corner to make a comeback. The dish to be served by both teams was a poached pears with a mint and cardamom custard.

The teams cooked and served the dessert in the spirit and heat of the challenge with Gordon urging both chefs on. The scores for the final round were, Curry Corner 19 out of 25 and Lasan 12 out of 25.

The total scores were Curry Corner 64 out of 100 and Lasan 76 out of 100. Thus, giving Lasan Restaurant the crown for the F Word Indian Restaurant category. The Lasan team were completely elated and thrilled by their win.

“This is one of the toughest challenge any restaurant can undertake to prove they are the best. We are thrilled to be chosen as the best Indian restaurant in the UK by Gordon Ramsay, who is one of the world’s most highly regarded chefs.”

Lasan went on to win the semi final after tough competition from Santa Maria (South American cuisine) and Sweet Mandarin (Chinese cuisine). The final smoked loin of lamb dish produced by chef Aktar  at Gordon Ramsay’s own restaurant, highly impressed Gordon, despite Aktar’s highly strung attitude which was commented on by Ramsay. It was a close call with Santa Maria who cooked a lamb kebab dish in the semi final.

The DESIblitz team have tasted the culinary creations of the Lasan restaurant and it can be said that the taste of the food is exquisite, the presentation has the wow factor and the hospitality and service is always of high standard. So, our experience definitely concurs with them winning the Indian Restaurant category.

We wish them the very best for the future. Well done Aktar Islam, Jabbar Khan and the team at Lasan Restaurant!

As part of the senior DESIblitz team, Indi is responsible for management and advertising. He especially loves producing stories with special video and photography features. His life motto is 'no pain, no gain...'
Supermarkets target Asian sales
Indian Restaurant vs Home Cooking