British supermarkets are becoming more savvy when it comes to South Asian food and products. Asda, Tesco and Sainsbury’s are amongst the front-runners in this interesting development. 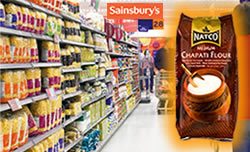 Sainsbury’s is trialling an extended Asian range for ethnic minority populations. These products went on sale at two Sainsbury’s stores earlier this year. Luton and Leicester branches were picked for the trial due to its high ethnic minority population. Stores in London are also stocking these Asian products. There are nine different offers of pulses, nuts, beans, juices, desserts, pickles and oils. The range includes Natco Chapati flour and Khazana Basmati Rice. The supermarket already stocks both Veetee and Tilda basmati rice. The products were advertised in local newspapers and with leaflets. Currently, sales are being monitored and customer feedback is being collected.

Asda has gone one step further in its bid to cater for ethnic minority populations. The supermarket chain has opened its first ethnic superstore.

The World Food Store is a supermarket catering mainly for Asian and immigrant populations.

Hounslow is the base for the store. Stocking Asian food products only found in international delis. Asda is hoping to tap into the ethnic food market which is worth £208 million and is growing by 11%. The supermarket has plans to open several similar stores in other Asian areas.

Asda is already catering for ethnic minorities in stores located in heavy Asian population areas such as Leicester and Birmingham with products that you would find in Asian groceries. This is naturally impacting the revenue of Asian businesses. Especially, because Asda has bigger buying power and can afford to undercut them in terms of pricing. 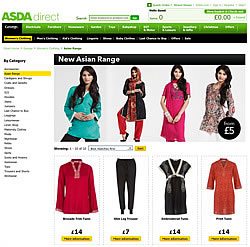 In September 2009, Asda also launched a range of salwar kameez, duppattas, kurtas and churidars for its Asian customers. The 13 piece collection is priced between £7 and £26 and is surprisingly affordable. Local Indian shops which source salwar kameez from India often sell them at £30 and may be out priced by the supermarket. Asian shop owners have expressed dismay at Asda’s new venture.

Asda stores in Bradford and Leicester are stocking the new Asian range. The clothes are designed by Indian suppliers, Poetic Gem. The range has been endorsed by Asian Woman magazine. Asda’s parent company Walmart has already launched a similar brand of Indian clothes in Canada. Their collection is Bollywood inspired and designed by in-house team, Ranka, a company run by Canadians of Indian origin. 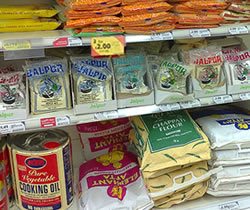 In contrast, Tesco has decided to concentrate its efforts on the Indian market. Tesco signed a deal to launch a wholesale cash and carry business in India. It has entered a joint venture with Trent, the retail arm of Tata Group, to supply its hypermarket Star Bazaar. Tesco plans to invest around £60 million and its first store will open in Mumbai next year. About 40% of the products will be non-food items such as electrical equipment and cooking utensils. Tesco will also enter wholesale retail supplying small stores, or kiranas, and other small retailers, restaurants, hoteliers and catering businesses.

Mothercare, which sells for pregnant mums with small children, is also opening stores in India. It has a franchise deal with Shopper’s Stop in India which has 21 stores in the country. Mothercare are signing a deal with DLF, India’s largest shopping mall owner, for a possible 51:49 partnership.

There are more than 1.5 million Indians living in Britain. In addition there are 1.6 million Muslims – most of the population coming from Pakistan and Bangladesh. The spending power of the Asians has been estimated to be £10 billion to £13 billion (including the wealth of British Asian rich list). These Asians are an important niche market that can be targeted for sales. It is no wonder that Britain’s supermarkets are cashing in on Asian customers.

S Basu wants to explore the place of Indian diaspora in a globalised world in her journalism. She likes being a part of contemporary British Asian culture and celebrates the recent flourishing of interest in it. She has a passion for Bollywood, Art and all things Indian.
Best Wines for Indian Cuisine
Lasan Victory on The F Word