Following his recent visit to Mumbai, Juan Mata has brought 14 Indian kids to England for a special launch, and a guided tour of Manchester United’s home.

"It is my first time to India but I don't think it's going to be my last because I have really enjoyed it!"

Juan Mata has given underprivileged children from Mumbai a special experience of the famous home stadium of Manchester United.

Two of Mata’s close friends, Ander Herrera and Morgan Schneiderlin, were also there to meet the lucky children from India.

But their once-in-a-lifetime trip didn’t with just a guided tour and some special guest appearances.

The 29-year-old also brought the youngsters to the launch of a photo exhibition at the National Football Museum in Manchester.

The exhibition showcases Mata’s recent charitable trip to Mumbai for the OSCAR Foundation, where he gave inspiration to many children.

Juan Mata: To India and Back 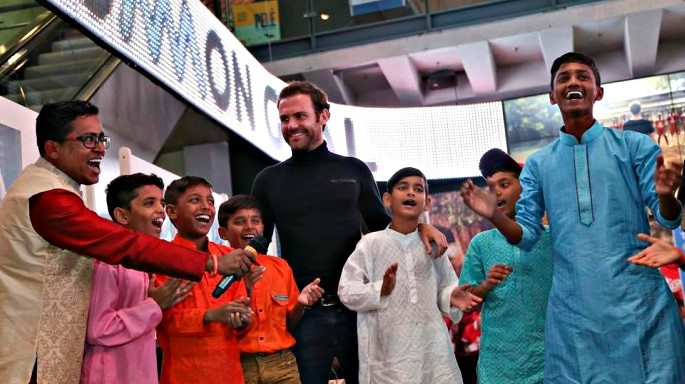 In June 2017, Juan Mata arrived in Mumbai to conduct a football and life skills session with 120 young people from the city.

Mata’s trip came through the OSCAR Foundation which teaches sport and the value of education to the youth.

Speaking about his visit to India, Juan Mata says: “It is my first time to India but I don’t think it’s going to be my last because I have really enjoyed it!”

But before the footballer had the chance to make a return to Mumbai, fourteen young Indians joined him in Manchester. 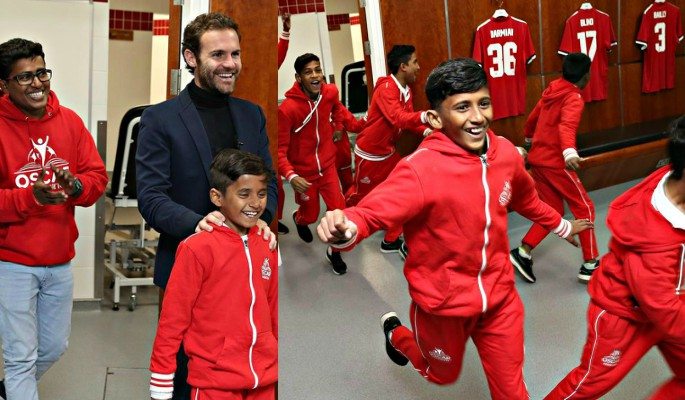 And despite a crucial match between Liverpool and Manchester United looming, Mata took good care of the youngsters.

After receiving a guided tour of Old Trafford from the Spanish star, they then saw the launch of Mata’s exhibition.

Photos from Juan Mata’s earlier trip to Mumbai are now available to see at the National Football Museum in Manchester.

Through his regular blog, the Manchester United player described his incredible experience. He says:

“We took these photos in India while visiting the OSCAR Foundation. [But] the best part was that some kids we spent time with were able to come to Old Trafford and the Museum. It was very important that they could join us in the opening of the exhibition, and make everybody feel the real impact that football has in their lives, and in the lives of millions around the world.”

Mata pledges one percent of his salary to charitable causes and hopes fellow football professionals begin to do so too.

Are you interested in finding out more about Juan Mata or the Oscar Foundation? 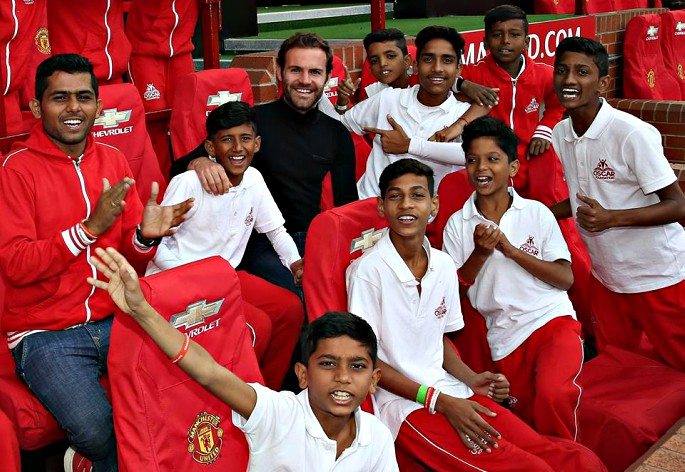 OSCAR (Organization for Social Change, Awareness and Responsibility) is a non-profit organisation which empowers underprivileged children with valuable life skills.

Founded in 2006, OSCAR runs a unique programme which teaches sport and the value of education to young people.

Speaking about OSCAR, Juan Mata says: “The 2 days spent with OSCAR [in India], seeing what you do for your community, has been an experience I will never forget. The warm welcome we got from them was priceless.”

Or you can check out our unique DESI Fans reaction to the recent Liverpool vs Manchester United grudge match.