An Indian maths teacher has gone viral for building a solar-powered car, a solo project 11 years in the making.

"perhaps I would have been India’s Elon Musk."

Indian maths teacher Bilal Ahmed has gone viral for building a solar-powered car, after working on it for 11 years.

Car enthusiast Bilal, who is from Srinagar in Kashmir, wanted to build a “luxurious” and sustainable vehicle that is not just for the wealthy.

Given the soaring fuel prices in the northern region and Tesla’s absence in the country, Bilal’s vehicle has caught the imagination.

He said: “Cars like Mercedes, Ferrari, BMW are just a dream for a common person.

“Only a few people are able to afford it while it remains a dream for others to drive such cars and roam in [them].

“I thought of something to give a luxurious feel to the people.” 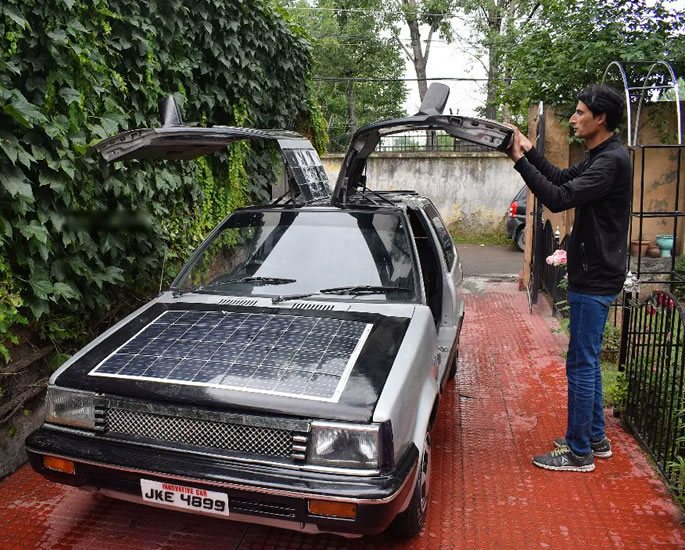 Although Jammu and Kashmir typically has “gloomy” weather, Bilal found a way to ensure that this project remained effective.

“I used solar panels which can give higher efficiency even in low sunlight days.”

Bilal studied cars made in the 1950s and spoke to experts before spending more than Rs. 15 Lakh (£15,600) building the fully-automatic car.

Bilal continued: “When I began the project and even after I completed it, no one provided me with any financial assistance.

Bilal was also hampered by a shortage of equipment. The car currently has a lead-acid battery but with the right tools, it could be upgraded to a lithium battery.

“Lack of exposure among the local mechanics is another problem.

“The knowledge they possess is limited which makes it really difficult to explain [to] them.”

Bilal’s solar-powered car is covered in solar panels, from the bonnet to the rear windshield.

Maximising the amount of energy that could be generated from the sedan’s relatively small surface area was key to his success.

Bilal used monocrystalline solar panels due to their ability to generate lots of power even with a little solar energy.

The panels are also efficient and occupy a low surface area.

The solar-powered car has a striking design, featuring gullwing doors. 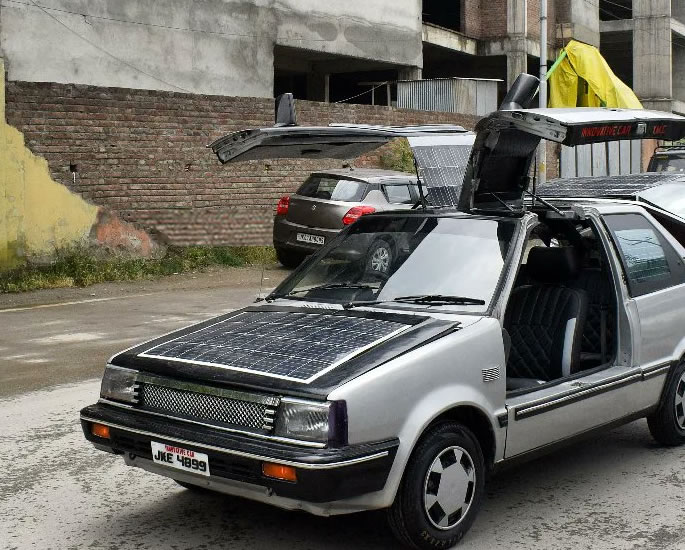 Bilal explained that the solar panels can remotely change direction as the sun moves.

He said: “The braking system will [also] regenerate the power to its batteries to save energy.

“It is eco-friendly and works on free energy resources. It has a huge potential to revolutionise the market.”

“It seems the car could one day also fly. The car has solar panels on the body and a charging point inside.”

He also compared it to the iconic DeLorean from the Back to the Future franchise.

Bilal hopes to start a company in order to mass-produce the vehicles, potentially providing an employment opportunity for young people in the region.

He plans to call it YMC, after his children Yosha and Maisha.

While backers are needed, Ahmed already has the support of the innovation centre at the National Institute of Technology in Srinagar.

“The IIED centre will help him to develop his innovation and will connect him with the industries or forums that can help him.

“Our local innovators need motivation and a marketplace. The challenge is to market the innovation.”