A Pakistani popcorn seller has built his own aeroplane. Muhammad Fayyaz’s efforts have even been admired by the Pakistan Air Force.

"I was literally in the air. I couldn't feel anything else."

Pakistani popcorn seller Muhammad Fayyaz, of Tabur, Punjab, has become an overnight sensation after he built his own plane.

The 32-year-old said he has flown in the aircraft and even revealed that the Pakistan Air Force is aware of his creation.

Visitors are wanting to see Muhammad’s creation, which sits in the courtyard of his home.

He built the plane by using an engine from a road cutter, burlap sacks for the wings and wheels from a rickshaw.

Mr Fayyaz learnt to build the aeroplane by watching TV clips and spoke of his first flight:

“I was literally in the air. I couldn’t feel anything else.”

The 32-year-old had dreams of joining the air force as a child, however, his father passed away while he was at school.

This forced him to drop out and do various jobs to support his family.

His passion for flying remained strong and saved as much money as he could. Mr Fayyaz worked as a popcorn seller during the day and worked as a security guard at night. 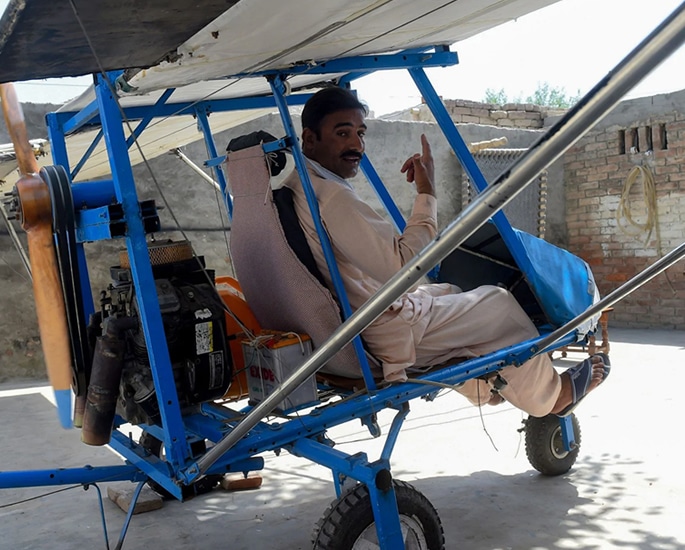 He looked at the science behind constructing an aeroplane. Mr Fayyaz watched episodes of Air Crash Investigation on National Geographic for information on thrust, air pressure, torque and propulsion.

Cheap internet access in a nearby city allowed him to look at online blueprints of planes.

Muhammad claimed he intertwined various blueprints to create his own design.

He used the funds to buy burlap sacks in bulk and persuaded a workshop employee to build a propeller.

Muhammad’s plane was a case of trial and error as the design had to be altered and some equipment needed to be replaced. 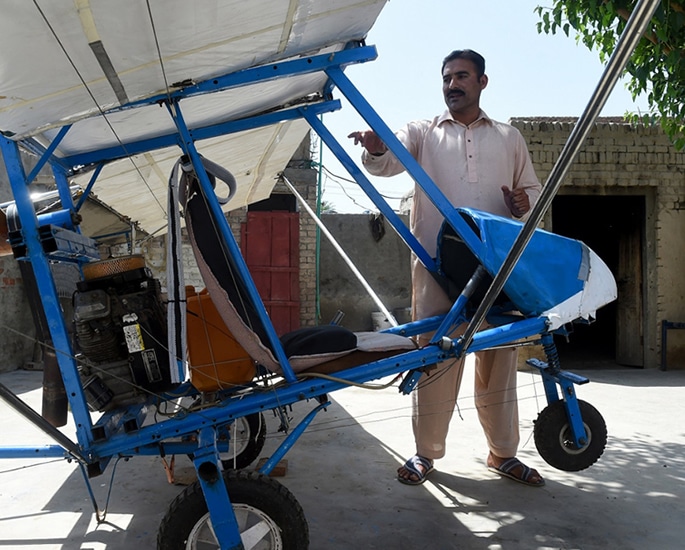 His family worried he had become obsessed as his mother Mumtaz Bibi said:

“I kept telling him to stop.

“I kept telling him to concentrate on his family and work, he was being crazy over nothing. But he didn’t listen to a single word.”

He continued and ended up with a finished product. On February 2019, he was ready to fly it.

His friends helped block a road which he used as a runway. Ameer Hussain claimed to have seen the plane take off said:

“It was between two and two-and-a-half feet off the ground. It flew for about two to three kilometres before landing.” 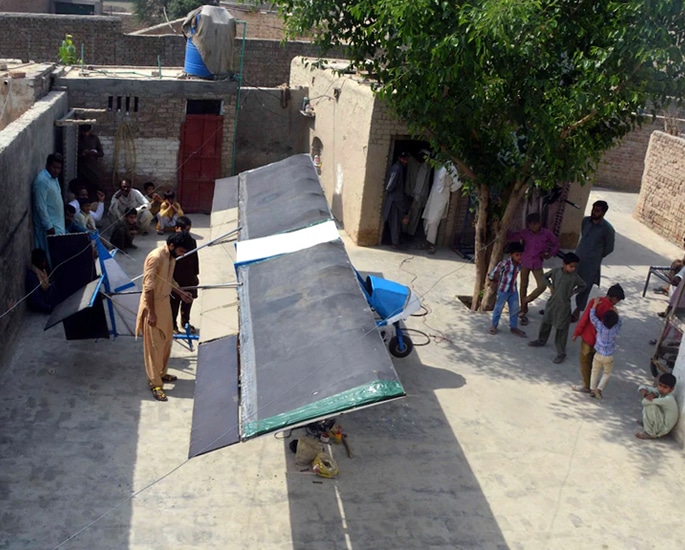 Mr Fayyaz wanted to try again in front of the village. Many had mocked him for his efforts.

On Pakistan Day (March 23, 2019), Mr Fayyaz was set to fly again, but the police arrived and arrested him.

Muhammad said: “I felt as though I had committed one of the worst acts in the world, as though I am the worst person in Pakistan.

“I had been locked up with criminals.”

“The plane was returned to him as a goodwill gesture. Should he obtain a flying licence or permit, he is free to fly.”

Pakistan Air Force representatives visited the plane on two occasions. The commander of a nearby base also issued the popcorn seller a certificate for his “passion and dexterity” in building what it described as a “mini basic aeroplane”.

Mr Fayyaz hopes to fly within a few months and is raising money for a new attempt.

“I am reassembling my plane and hopefully will be able to do it in a couple of months.

“The civil aviation authority is in contact with me and has promised to provide a proper space for take off and landing for the next attempt.

“I am seeking help from anybody for finance and will collect money on my own as well.”

Muhammad’s efforts have resulted in social media fame and some have called him a “hero” and an “inspiration”.

See the video of the plane and flight: 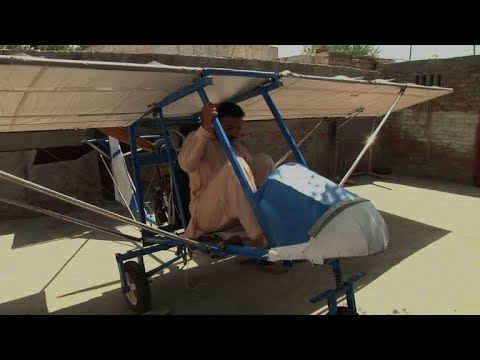 Dhiren is a journalism graduate with a passion for gaming, watching films and sports. He also enjoys cooking from time to time. His motto is to “Live life one day at a time.”
Indian Groom playing PUBG at Wedding Ceremony goes Viral
10 Best Desi Hacks & Tricks for the Home